listen) is the capital city of Thua Thien-Huế province, Vietnam. Between 1802 and 1945, it was the imperial capital of the Nguyen dynasty. It is well known for its monuments and architecture. Its population stands at about 950,000 people.[1] In Sino-Vietnamese script, used until 1945, the name of the city is written 化.

Huế originally rose to prominence as the capital of the Nguyễn Lords, a feudal dynasty which dominated much of southern Vietnam from the 17th to the 19th century. In 1775 when Trịnh Sâm captured it, it was known as Phú Xuân. In 1802, Nguyễn Phúc Ánh (later Emperor Gia Long) succeeded in establishing his control over the whole of Vietnam, thereby making Huế the national capital.[2]

Huế was the national capital until 1945, when Emperor Bao Dại abdicated and a communist government was established in Hà Nội (Hanoi), in the north.[3] While Bảo Đại was briefly proclaimed "Head of State" with the help of the returning French colonialists in 1949 (although not with recognition from the communists and the full acceptance of the Vietnamese people), his new capital was Sài Gòn (Saigon), in the south.[4]

In the Vietnam War, Huế’s central position placed it very near the border between North Vietnam and South Vietnam; however, the city was located in South Vietnam. In the Tết Offensive of 1968, during the Battle of Huế, the city suffered considerable damage not only to its physical features, but its reputation as well, most of it from American firepower and bombings on the historical buildings as well as the massacre at Huế committed by the communist forces. After the war’s conclusion, many of the historic features of Huế were neglected because they were seen by the victorious regime and some other Vietnamese as "relics from the feudal regime"; the Vietnamese Communist Party doctrine officially described the Nguyễn Dynasty as "feudal" and "reactionary." There has since been a change of policy, however, and many historical areas of the city are currently being restored.

The city is located in central Vietnam on the banks of the Sông Hương (Perfume River), just a few miles inland from the Biển Đông. It is about 700 km (438 mi.) south of the national capital of Hanoi and about 1100 km (690 mi.) north of Hồ Chí Minh City, the country’s largest city, formerly known as Saigon.

Huế is well known for its historic monuments, which have earned it a place in UNESCO’s World Heritage Sites.[6] The seat of the Nguyễn emperors was the Citadel, which occupies a large, walled area on the north side of the Perfume River. Inside the citadel was a forbidden city where only the emperors, concubines, and those close enough to them were granted access; the punishment for trespassing was death. Today, little of the forbidden city remains, though reconstruction efforts are in progress to maintain it as a historic tourist attraction.

Roughly along the Perfume River from Huế lie myriad other monuments, including the tombs of several emperors, including Minh Mạng, Khải Định, and Tự Đức. Also notable is the Thiên Mụ Pagoda, the largest pagoda in Huế and the official symbol of the city.[7]

A number of French-style buildings lie along the south bank of the Perfume River. Among them are Quốc Học High School, the oldest high school in Vietnam, and Hai Ba Trung High School.

The Hue Museum of Royal Fine Arts on 3 Le Truc Street also maintains a collection of various artifacts from the city. 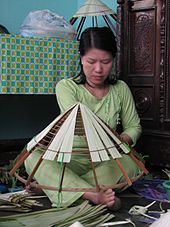 A woman weaving a nón lá, a conical straw hat typical of Huế.

Located in the center of Vietnam, Hue is famous for its severe weather with boiling hot days in the summer and ceaseless raining weeks in the winter. Hue people, therefore, have formed their own culture to overcome geographical and climatic difficulties. This culture, seen through food, characteristics, and other aspects in daily life, reflects the typical feature of Hue people.[citation needed]

Having been the capital city of Vietnam for approximately 150 years during feudal time (1802–1945),[8] the royal lifestyle and customs have had a predominant impact on the characteristics of Hue people, even long after these monarchical periods are over.[citation needed]

Historically, the qualities valued by the royal family were reflected in its name-giving customs, which came to be adopted by society at large.[citation needed] As a rule, royal family members were named after a poem written by Minh Mang, the second king of Nguyễn Dynasty. The poem, Đế hệ thi",[9] has been set as a standard frame to name every generation of the royal family, through which people can know the family order as well as the relationship between royal members. More importantly, the names reflect the essential personality traits that the royal regime would like their offspring to uphold. This name-giving tradition is proudly kept alive and nowadays people from Hue royal family branches (normally considered 'pure' Hue) still have their names taken from the words in the poem.[citation needed] 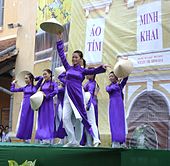 The design of the modern-day áo dài, a Vietnamese national costume, evolved from an outfit worn at the court of the Nguyễn Lords at Huế in the 18th century. A court historian of the time described the rules of dress as follows: Outside court, men and women wear gowns with straight collars and short sleeves. The sleeves are large or small depending on the wearer. There are seams on both sides running down from the sleeve, so the gown is not open anywhere. Men may wear a round collar and a short sleeve for more convenience.[nb 1] This outfit evolved into the áo ngũ thân, a five-paneled aristocratic gown worn in the 19th and early 20th centuries. Inspired by Paris fashions, Nguyễn Cát Tường and other artists associated with Hanoi University redesigned the ngũ thân as a modern dress in the 1920s and 1930s; later, in the 1950s, Saigonese designers tightened the fit to produce the version widely worn by Vietnamese women today.[10] While the áo dài and nón lá are generally seen as a symbol of Vietnam as a whole, the combination is seen by Vietnamese as being particularly evocative of Hue. Violet-coloured áo dài are especially common in Huế, the color having a special connection to the city's heritage as an ancient capital.[11][12] 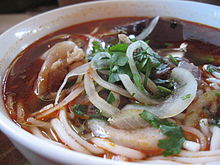 The cuisine of Huế draws from throughout Vietnam, but one of the most striking differences is the prominence of vegetarianism in the city. Several all-vegetarian restaurants are scattered in various corners of the city to serve the locals who have a strong tradition of eating vegetarian twice a month, as part of their Buddhist beliefs. Another feature of Huế dishes that sets them apart from other regional cuisines in Vietnam is the relatively small serving size with refined presentation, a vestige of its royal cuisine. Finally, another feature of Huế cuisine is that it is often very spicy.[13]

In Huế, Buddhism is taken a bit more seriously than elsewhere in Vietnam, with more monasteries than anywhere else and the nation's most famous monks. Famously in 1963, Thích Quảng Đức drove to Saigon to protest anti-Buddhist policies of the South Vietnamese government and set himself on fire on a Saigon street.[14]

In Addition to the various touristic attractions in Hué itself, the city also offers day-trips to the Demilitarized Zone lying approximately 70 km north, showing various war settings like The Rockpile, Khe Sanh Combat Base or the Vinh Moc Tunnels.