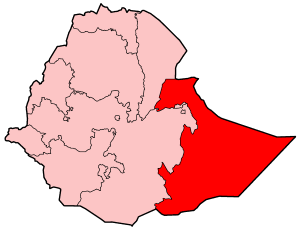 Somali ( _so. "Gobolka Soomaalida"); is the eastern-most of the nine ethnic divisions ("kililoch") of . It is often called Somali, though it is not to be confused with the independent country of the same name. Also known as Western Somali, the capital of Somali State is . The capital had been at /Godey until April 1994, but due to political considerations it was moved. [ [http://www.africa.upenn.edu/eue_web/strp0494.htm "April 1994 Monthly Situation Report"] United Nations Emergencies Unit for Ethiopia (accessed 29 May 2008)] ) Other major towns and cities include (the Somali spelling in brackets): (Dhagaxbuur), (Qabridahare), (Shilaabo), , (Qalaafe) (Wardheer)and (shiniile). The region borders to the south-west, the Ethopian regions of , Afar and (Diridhawa) to the west, to the north and to the north, east and south.

The region covers much of the traditional territory of and it formed a large part of the pre-1995 province of . The region has a very high Somali population, and there is internal pressure to remove Ethiopian rule. in the past has been tried to free as part of a . In the 1970s, Somalia invaded Ethiopia in support of local Somali rebels, particularly during the ,was defeated.

In late April , heavy rains generated widespread flooding throughout Somali Region as well as Somalia, and caused the to burst its banks. As of May , the ing in Somali Region alone had caused over 100 confirmed deaths and widespread property damage affecting over 100,000 persons. The floods also destroyed shelters housing 25,000 Somali refugees in .

Presidents of the Executive Committee