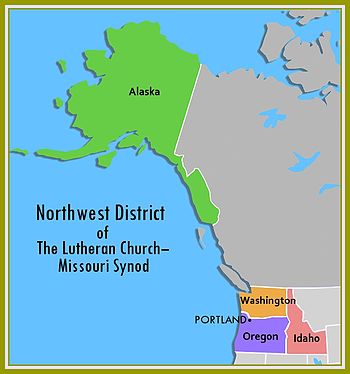 The Northwest District encompasses the states of Alaska, Idaho, Oregon, and Washington. The district office is located in Portland, Oregon.

The Northwest District is one of the 35 districts of the Lutheran Church - Missouri Synod (LCMS), and encompasses the states of Alaska, Idaho, Oregon and Washington; one Idaho congregation is in the Montana District. The Northwest District includes approximately 263 congregations and missions, subdivided into 25 circuits, as well as 94 preschools, 35 elementary schools and 3 high schools. Baptized membership in district congregations is approximately 75,000.

The Northwest District was formed as the Oregon and Washington District in 1899 when the California and Oregon District was divided, also creating the California and Nevada District; the name was changed to the Northwest District in 1948. District offices are located in Portland, Oregon; Rev. Paul Linnemann became the district president in 2009 [1]. Delegates from each congregation meet in convention every three years to elect the district president, vice presidents, circuit counselors, a board of directors, and other officers; the last convention was held June 18-20, 2009, and the next will be held in 2012.