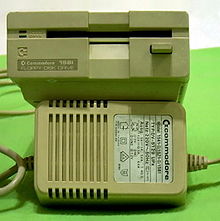 The Commodore 1581 is a 3½ inch double sided double density floppy disk drive made by Commodore Business Machines (CBM) primarily for its C64 and C128 home/personal computers. The drive stores 800 kilobytes using an MFM encoding[1] but format different from both MS-DOS (720 kB), and the Amiga (880 kB) formats. With special software it's possible to read C1581 disks on a x86 PC system. And read MS-DOS disks in the C1581 (Big blue reader) provided the PC floppy handles the "720 kB" size format.[1] It was released in the summer of 1987 and quickly became popular with bulletin board system (BBS) operators and other users.

Like the 1541 and 1571, the 1581 has an on board MOS Technology 6502 CPU with its own ROM and RAM, and uses a serial version of the IEEE-488 interface. Inexplicably, the drive's ROM contains commands for parallel use, although no parallel interface was available. Like the 1571, it can read various other disk formats using special software. This capability was most frequently used to read MS-DOS disks. However, unlike the 1571, which is nearly 100% backward-compatible with the 1541, the 1581 has limited compatibility with Commodore's earlier drives. Although it responds to the same DOS commands, most disk utilities written prior to 1987, most notably fast loaders, are so 1541-specific that they do not work with the 1581.

The version of Commodore DOS built into the 1581 added support for partitions, which could also function as fixed-allocation subdirectories. PC style subdirectories were rejected as being too difficult to work with in terms of Block Allocation Maps, then still much in vogue, and which for some time had been the traditional way of inquiring into block availability. When used together with the C128, it implements faster burst mode access than the Commodore 1571 5¼" drive. When using the 1581 together with the older C64, however, it is almost as slow as the older 1541 drive, due to limitations of the C64's ROM code. The 1581 provides a total of 3160 blocks free when formatted (a block being equal to 256 bytes). The number of permitted directory entries was also increased, to 288 entries. With a storage capacity of 800 KB, the 1581 was the highest capacity serial bus drive ever made by Commodore (the 1 MB SFD-1001 used the parallel IEEE-488), and the only 3½" one. However, starting in 1991, Creative Micro Designs (CMD) made the FD-2000 high density (1.6 MB) and FD-4000 extended density (3.2 MB) 3½" drives, both of which offered not only a 1581 emulation mode but also 1541 and 1571 compatibility modes.

Like the 1541 and 1571, a nearly identical job queue is available to the User in Zero page (except for Job 0), providing for exceptional degrees of compatibility.

Unlike the case of the 1541 and 1571, the low-level disk format used by the 1581 is similar enough to the MS-DOS format as the 1581 is built around a WD1770 FM/MFM floppy controller chip. PC Floppy controllers (ISA or onboard, but not USB floppy drives) are able to deal with the 1581 format without need for any special tricks. Thus, utilities to format, read, and write 1581-format disks in standard PC floppy drives under Linux or Microsoft Windows exist. This controller chip, however, was the seat of some early problems with 1581 drives when the first production runs were recalled due to a high failure rate; the problem was quickly corrected. Later versions of the 1581 drive had a smaller, more streamlined looking external power supply provided with them.

This article was originally based on material from the Free On-line Dictionary of Computing, which is licensed under the GFDL.

The 1581 disk has 80 logical tracks, each with 40 logical sectors (the actual physical layout of the diskette is abstracted and managed by a hardware translation layer). The directory starts on 40/3 (track 40, sector 3). The disk header is on 40/0, and the BAM (Block Allocation Map) resides on 40/1 and 40/2.