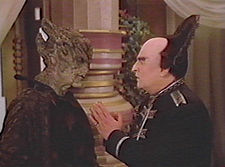 The Drakh are a fictional alien race in the Babylon 5 universe. The Drakh were dark servants for the race of First Ones known as the Shadows. They appeared in the fourth and fifth seasons of Babylon 5 as well as the television movie, A Call to Arms. The Drakh are a ruthless, malevolent race who become prominent adversaries to the Interstellar Alliance following the conclusion of the Shadow War in 2261. Armed with the technology left behind by their Shadow masters, the Drakh are determined to assume their vacant role and, with the aid of other former Shadow allies, use it to establish dominion over the galaxy.

The Drakh are reptilian in appearance, possessing a stocky in build with heavy endo and exo-skeletal systems. The Drakh have scaly skin that is dark grey or green in appearance.

They have an undetermined hive mind mentality, and possess the ability to communicate with one another over great distances in space. The name "Drakh" is used as both a collective and personal name.[1] In the Legion of Fire book trilogy we learn that the Drakh do have names, and that the Drakh who controls Londo Mollari is known as Shiv'kala.

The Drakh also grow parasitic extensions of their being known as Keepers on their bodies. The Keepers are partially sentient creatures resembling a large, flesh-covered nervous sustem with protruding legs that also function as probosci to insert and innervate the nervous systems of other beings. The Keepers function as remote control systems for the Drakh's conscripted servants; they attach a Keeper to a host organism as a means of controlling and monitoring the person through telepathic relay. This control, however, can be neutralized through the consumption of large quantities of certain chemicals, such as alcohol. A Keeper is primarily a passive agent that merely monitors and relays information, but is also capable of direct control and neurological interference such as pain induction, paralysis, or physical violence. In their conscious state, a Keeper is invisible. A Keeper can never be fully removed from the host; the internal segements will break away from the outer shell and regenerate the full body from inside. A Keeper can only be destroyed by killing the Drakh from which it was spawned.

The Drakh were originally a marginal race known mostly for their malice, cunning, and intelligence. According to Londo Mollari, their reputation served synonymously as galactic "boogeymen" that were frightening, but not particularly dangerous. As of 2261, the Drakh had not been seen or contacted by other races, effectively vanishing without a trace, for several centuries. It is likely that this disappearance was the result of the Drakh forging an alliance with The Shadows, and taking up residence on their homeworld of Z'ha'dum, to safeguard it during their hibernation. The Drakh may also have served as the agents who attempted to destroy Babylon 4 when it was constructed after recognizing it as the station that facilitated the end of the last Shadow War 1,000 years earlier.

During the Shadow War of 2260-2261, the Drakh, along with The Streibs, served The Shadows primarily as a support mechanism; they built weapons, collected intelligence, and performed many secondary missions, but did not participate in the war directly. When the war abruptly ended, the Shadows abandoned the Drakh to join the other First Ones as they left the galaxy. The Drakh were left behind on Z'ha'dum along with the remaining stores of technology the Shadows did not take with them. Their stewardship of the planet ended when Lyta Alexander telepathically triggered the planet's self-destruct systems, forcing the Drakh to evacuate before the planet exploded.

Abandoned and homeless, the Drakh immediately began searching for a new base of operations amongst former Shadow allies. They attempted to utilize civil discord to establish a territory on Minbar, but that attempt was thwarted when Delenn became aware of it. They ultimately decided to take refuge on Centauri Prime, where they had a vestigial presence, and also take revenge on Londo Mollari for his betrayal of the Shadows the year before. They assumed control of the local government by binding the Centauri Regent with a Keeper, and used his authority to launch a series of clandestine attacks on shipping lines to destabilize the Interstellar Alliance and to ultimately build substantial malice for the Centauri when their actions were uncovered. The Alliance eventually discovered that the Centauri attack ships were being controlled by Shadow technology, but by then, the former League of Non-Aligned Worlds had already led a retaliatory attack on Centauri Prime, reducing much of the Centauri civilization to rubble.

With Centauri Prime in ruins and isolated from the Alliance, the Drakh had successfully seized the planet as their new home and began building their forces for their future campaigns. They allowed Londo Mollari to ascend the throne of Emperor and act as their unwilling agent through the use of a Keeper, and the threat of detonating hidden fusion bombs throughout the planet if he disobeyed them. On one of Londo's rare excursions outside of the royal palace, they forced him to give John Sheridan and Delenn an urn as a present for their son when he came of age; the urn contained a Keeper, and the Drakh intended to take control of David Sheridan some time in the future.

The Drakh held control of Centauri Prime for the next 17 years, and molded it as an instrument of vengeance agains the Alliance. They successfully managed to take control of David Sheridan on his 16th birthday, and he journeyed to Centauri Prime at their command; Delenn and Sheridan pursued him in a rescue attempt, and were captured. Acting as an outside agent, Ambassador Vir Cotto destroyed the Drakh's primary installation, thus exposing the Drakh to the rest of the Alliance. Outraged over the defiance, the Drakh detonated the fusion bombs, killing millions of Centauri, prompting Londo to betray them by releasing the Sheridan family and assisting their escape. [2] To ensure their success, he enlisted the help of his friend G'kar to kill him before his intoxicated Keeper awoke; the Keeper unfortunately recovered in time to retaliate, and both men strangled each other.

The Drakh were forced to abandon Centauri Prime and to hide from the Alliance's intense efforts to exterminate them for their actions. Once ousted, the Alliance helped establish Vir Cotto as the new Emperor of Centauri Prime, and aided in rebuilding the planet.

The Drakh spent the next five years conspiring a revenge plot against the Alliance for their troubles since the end of the Shadow War. On the anniversary of the establishment of the Alliance, the Drakh launched an amibitious plan to destroy Earth in the first of many intended attacks designed to demoralize the Alliance for their resistance. To aid them in this cause, the Drakh collected and activated the only remaining Shadow planet killer left in the galaxy, and enlisted the aid of many spies in their service to thwart attempts to stop them; they destroyed the planet Daltron 7 to test the planet killer's efficacy prior to their final assault on Earth. [3] The plan was detected, however, by the Technomage Galen, who alerted Sheridan and a small cadre of cohorts to stop them. The assault on Earth was stopped and the Shadow planetkiller was destroyed, but the Drakh managed to successfully introduce a Shadow-designed nanovirus on Earth prior to their defeat. The plague was intended to wipe out all life on Earth, but eventually the Excalibur and others managed to find a cure.

The current status of the Drakh has not been revealed. After their presence on Centauri Prime was revealed, they left the world, with the Centauri and the Alliance in hot pursuit. The Drakh appear to be more interested in interfering in the affairs of other civilizations covertly rather than overtly; Drakh warships were seen shadowing and monitoring the Interstellar Alliance warship IAS Excalibur, in Crusade, as it searched for a cure for Earth's Drakh plague. Though they did use considerable force on occasion (such as infecting the Earth), in actual practice they came across more like a paper tiger than a legitimate arch-foe in Crusade. The only widely known time when the Drakh used brute force was when they launched their attack on Earth with the last Shadow Planet Killer and much of the Drakh Fleet. EarthForce, President John Sheridan, and the rest of the Interstellar Alliance beat back the Drakh invasion. The Drakh Plague was released on Earth as their forces retreated. They also assaulted and destroyed the shipyards that produced the Victory class destroyers as they withdrew from battle; this meant Excalibur would be the only surviving ship of that class for many years until the shipyards are rebuilt.

In the Babylon 5 episode "The Deconstruction of Falling Stars," it is mentioned that the sun in the Earth solar system is being artificially manipuated into supernova by the year 1,002,261 A.D. While not expressly mentioned, it is possible that the Drakh might be one of the potential culprits behind it.