.NET Framework
This article is about the Microsoft technology. For the Top-level domain, see .net. For other uses, see .NET.

The .NET Framework (pronounced dot net) is a software framework that runs primarily on Microsoft Windows. It includes a large library and supports several programming languages which allows language interoperability (each language can use code written in other languages). Programs written for the .NET Framework execute in a software environment (as contrasted to hardware environment), known as the Common Language Runtime (CLR), an application virtual machine that provides important services such as security, memory management, and exception handling. The class library and the CLR together constitute the .NET Framework. 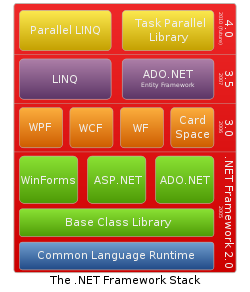 Microsoft started development on the .NET Framework in the late 1990s originally under the name of Next Generation Windows Services (NGWS). By late 2000 the first beta versions of .NET 1.0 were released.[2]

The .NET Framework family also includes two versions for mobile or embedded device use. A reduced version of the framework, the .NET Compact Framework, is available on Windows CE platforms, including Windows Mobile devices such as smartphones. Additionally, the .NET Micro Framework is targeted at severely resource-constrained devices.

Interoperability
Because computer systems commonly require interaction between new and older applications, the .NET Framework provides means to access functionality that is implemented in programs that execute outside the .NET environment. Access to COM components is provided in the System.Runtime.InteropServices and System.EnterpriseServices namespaces of the framework; access to other functionality is provided using the P/Invoke feature.
Common Language Runtime Engine
The Common Language Runtime (CLR) is the execution engine of the .NET Framework. All .NET programs execute under the supervision of the CLR, guaranteeing certain properties and behaviors in the areas of memory management, security, and exception handling.
Language Independence
The .NET Framework introduces a Common Type System, or CTS. The CTS specification defines all possible datatypes and programming constructs supported by the CLR and how they may or may not interact with each other conforming to the Common Language Infrastructure (CLI) specification. Because of this feature, the .NET Framework supports the exchange of types and object instances between libraries and applications written using any conforming .NET language.
Base Class Library
The Base Class Library (BCL), part of the Framework Class Library (FCL), is a library of functionality available to all languages using the .NET Framework. The BCL provides classes which encapsulate a number of common functions, including file reading and writing, graphic rendering, database interaction, XML document manipulation and so on.
Simplified Deployment
The .NET Framework includes design features and tools that help manage the installation of computer software to ensure that it does not interfere with previously installed software, and that it conforms to security requirements.
Security
The design is meant to address some of the vulnerabilities, such as buffer overflows, that have been exploited by malicious software. Additionally, .NET provides a common security model for all applications.
Portability
While Microsoft has never implemented the full framework on any system except Microsoft Windows, the framework is engineered to be platform agnostic,[5] and cross-platform implementations are available for other operating systems (see Silverlight and the Alternative implementations section below). Microsoft submitted the specifications for the Common Language Infrastructure (which includes the core class libraries, Common Type System, and the Common Intermediate Language),[6][7][8] the C# language,[9] and the C++/CLI language[10] to both ECMA and the ISO, making them available as open standards. This makes it possible for third parties to create compatible implementations of the framework and its languages on other platforms. 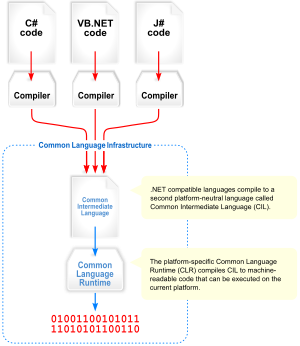 The purpose of the Common Language Infrastructure (CLI) is to provide a language-neutral platform for application development and execution, including functions for Exception handling, Garbage Collection, security, and interoperability. By implementing the core aspects of the .NET Framework within the scope of the CLI, this functionality will not be tied to a single language but will be available across the many languages supported by the framework. Microsoft's implementation of the CLI is called the Common Language Runtime, or CLR.

The lowest-level human-readable programming language defined by the CLI specification is called the Common Intermediate Language (CIL). The CIL code is housed in .NET assemblies. As mandated by specification, assemblies are stored in the Portable Executable (PE) format, common on the Windows platform for all DLL and EXE files. The assembly consists of one or more files, one of which must contain the manifest, which has the metadata for the assembly. The complete name of an assembly (not to be confused with the filename on disk) contains its simple text name, version number, culture, and public key token. The public key token is a unique hash generated when the assembly is compiled, thus two assemblies with the same public key token are guaranteed to be identical from the point of view of the framework.[dubious – discuss] A private key can also be specified known only to the creator of the assembly and can be used for strong naming and to guarantee that the assembly is from the same author when a new version of the assembly is compiled (required to add an assembly to the Global Assembly Cache).

.NET has its own security mechanism with two general features: Code Access Security (CAS), and validation and verification. Code Access Security is based on evidence that is associated with a specific assembly. Typically the evidence is the source of the assembly (whether it is installed on the local machine or has been downloaded from the intranet or Internet). Code Access Security uses evidence to determine the permissions granted to the code. Other code can demand that calling code is granted a specified permission. The demand causes the CLR to perform a call stack walk: every assembly of each method in the call stack is checked for the required permission; if any assembly is not granted the permission a security exception is thrown.

The Base Class Library (BCL) includes a small subset of the entire class library and is the core set of classes that serve as the basic API of the Common Language Runtime.[11] The classes in mscorlib.dll and some of the classes in System.dll and System.core.dll are considered to be a part of the BCL. The BCL classes are available in both .NET Framework as well as its alternative implementations including .NET Compact Framework, Microsoft Silverlight and Mono.

The Framework Class Library (FCL) is a superset of the BCL classes and refers to the entire class library that ships with .NET Framework. It includes an expanded set of libraries, including Windows Forms, ADO.NET, ASP.NET, Language Integrated Query, Windows Presentation Foundation, Windows Communication Foundation among others. The FCL is much larger in scope than standard libraries for languages like C++, and comparable in scope to the standard libraries of Java.

The .NET Framework CLR frees the developer from the burden of managing memory (allocating and freeing up when done); instead it does the memory management itself by detecting when memory can be safely freed. Memory is allocated to instantiations of .NET types (objects) from the managed heap, a pool of memory managed by the CLR. As long as there exists a reference to an object, which might be either a direct reference to an object or via a graph of objects, the object is considered to be in use. When there is no reference to an object, and it cannot be reached or used, it becomes garbage, eligible for collection. NET Framework includes a garbage collector which runs periodically, on a separate thread from the application's thread, that enumerates all the unusable objects and reclaims the memory allocated to them.

The .NET Garbage Collector (GC) is a non-deterministic, compacting, mark-and-sweep garbage collector. The GC runs only when a certain amount of memory has been used or there is enough pressure for memory on the system. Since it is not guaranteed when the conditions to reclaim memory are reached, the GC runs are non-deterministic. Each .NET application has a set of roots, which are pointers to objects on the managed heap (managed objects). These include references to static objects and objects defined as local variables or method parameters currently in scope, as well as objects referred to by CPU registers.[12] When the GC runs, it pauses the application, and for each object referred to in the root, it recursively enumerates all the objects reachable from the root objects and marks them as reachable. It uses .NET metadata and reflection to discover the objects encapsulated by an object, and then recursively walk them. It then enumerates all the objects on the heap (which were initially allocated contiguously) using reflection. All objects not marked as reachable are garbage.[12] This is the mark phase.[13] Since the memory held by garbage is not of any consequence, it is considered free space. However, this leaves chunks of free space between objects which were initially contiguous. The objects are then compacted together to make used memory contiguous again.[12][13] Any reference to an object invalidated by moving the object is updated by the GC to reflect the new location.[13] The application is resumed after the garbage collection is over.

While Microsoft and their partners hold patents[citation needed] for the CLI and C#, ECMA and ISO require that all patents essential to implementation be made available under "reasonable and non-discriminatory terms". In addition to meeting these terms, the companies have agreed to make the patents available royalty-free.[citation needed]

However, this does not apply for the part of the .NET Framework which is not covered by the ECMA/ISO standard, which includes Windows Forms, ADO.NET, and ASP.NET. Patents that Microsoft holds[citation needed] in these areas may deter non-Microsoft implementations of the full framework.[17]

On 3 October 2007, Microsoft announced that much of the source code for the .NET Framework Base Class Library (including ASP.NET, ADO.NET, and Windows Presentation Foundation) was to have been made available with the final release of Visual Studio 2008 towards the end of 2007 under the shared source Microsoft Reference License.[1] The source code for other libraries including Windows Communication Foundation (WCF), Windows Workflow Foundation (WF), and Language Integrated Query (LINQ) were to be added in future releases. Being released under the non-open source Microsoft Reference License means this source code is made available for debugging purpose only, primarily to support integrated debugging of the BCL in Visual Studio.

Some concerns and criticism relating to .NET include:

The Microsoft .NET Framework is the predominant implementation of .NET technologies. Other implementations for parts of the framework exist. Although the runtime engine is described by an ECMA/ISO specification, other implementations of it may be encumbered by patent issues; ISO standards may include the disclaimer, "Attention is drawn to the possibility that some of the elements of this document may be the subject of patent rights. ISO shall not be held responsible for identifying any or all such patent rights."[24] It is more difficult to develop alternatives to the base class library (BCL), which is not described by an open standard and may be subject to copyright restrictions. Additionally, parts of the BCL have Windows-specific functionality and behavior, so implementation on non-Windows platforms can be problematic.

Some alternative implementations of parts of the framework are listed here.