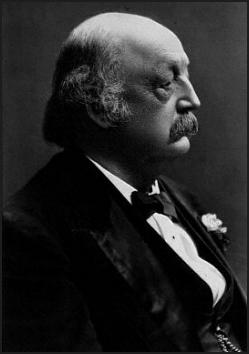 Benjamin Franklin Butler (November 5, 1818ndash January 11, 1893) was an American and who represented in the and later served as governor. During the , his administration of occupied New Orleans, his policies regarding slaves as "contrabands", his ineffectual leadership in the , and the fiasco of Fort Fisher rank him as one of the most controversial "political generals" of the war. He was widely reviled for years after the war by Southern whites, who gave him the nickname "Beast Butler".

Butler was born in , the son of Captain John Butler, who served under in the (during the ). He was named after . After the death of his father, his mother, Charlotte (Ellison) Butler, operated a boarding house in . He attended Waterville College (now ) in and graduated in 1838. He was admitted to the bar in 1840, began practice at Lowell, and soon attained distinction as a lawyer, particularly in criminal cases. He married , a stage actress and daughter of Dr. of Lowell, in 1842. Their daughter, Blanche, eventually married , a Mississippi senator who had served in the during the Civil War.

Entering politics as a Democrat, Butler first attracted general attention by his vigorous campaign in Lowell advocating the passage of a law establishing a ten-hour day for laborers. He was a member of the in 1853, and of the in 1859, and was a delegate to the s from 1848 to 1860. In the convention of 1860 at , he advocated the nomination of (voting for him on the first fifty-seven ballots) and opposed , and in the ensuing campaign he supported . His military career prior to the Civil War began with him as a third lieutenant in the Massachusetts Militia in 1839; he was promoted to brigadier general of the militia in 1855. These ranks were closely associated with his political positions and Butler received little practical military experience to prepare him for the coming conflict.

Governor sent Butler with a force of Massachusetts troops to reopen communication between the Union states and A major railroad connection from the Northeast passed through Baltimore and immediately after the start of the war it was unclear whether would stay in the Union. Butler arrived with the 8th Massachusetts Infantry Regiment by steamer at Annapolis on April 20, 1861. He employed his expert negotiation skills with the Governor of Maryland and, by April 22, his regiment had disembarked and was put to work repairing damaged railroad tracks around Baltimore. At the same time, the 7th New York Infantry arrived and Butler assumed command of the entire force; his military career would be characterized by his eagerness to assume authority in the absence of official instructions. While Butler remained at Annapolis, the New Yorkers were the first Union troops to march into Washington following President Lincoln's initial call for volunteers. On May 13, Butler's remaining force occupied Baltimore without opposition. Lincoln appointed him one of the first Major Generals of U.S. Volunteers, ranking from May 16, 1861. (Also on that day, appointments were given to John A. Dix and . Both appeared on the promotion order before Butler, making him the third highest ranking major general of volunteers.)

Butler was assigned command of in and of the . In the conduct of tactical operations in Virginia, Butler was almost uniformly unsuccessful. His first action at was a humiliating defeat for the . While in command at Fort Monroe, Butler declined to return to their owners s who had come within his lines, on the grounds that, as laborers for fortifications, and so on, they were contraband of war, thereby justifying granting these slaves a relative freedom, in spite of the . The U.S. Congress later mandated that other Union commanders refuse to return slaves to their erstwhile masters.

Later, in 1861, Butler commanded an expeditionary force that, in conjunction with the , took Forts Hatteras and Clark in . In May 1862, he commanded the force that occupied after it was captured by the Navy. In the administration of that city he showed great firmness and severity. New Orleans was unusually healthy and orderly during the Butler regime. Many of his acts, however, gave great offense, such as the seizure of $800,000 that had been deposited in the office of the Dutch and his imprisonment of the French Champagne magnate . Most notorious was of May 15, issued after some provocation, that if any woman should insult or show contempt for any officer or soldier of the , she shall be regarded and shall be held liable to be treated as a "woman of the town plying her avocation", i.e., a . This order provoked protests both in the North and the South, and also abroad, particularly in and , and it was doubtless the cause of his removal from command of the on December 17, 1862. He was nicknamed "Beast Butler," and "Spoons," for his alleged habit of pilfering the silverware of Southern homes in which he stayed.

On June 7 he had executed one , who had torn down a placed by Admiral Farragut on the United States Mint in New Orleans; for this execution, he was denounced (December 1862) by Confederate President in General Order 111 as a deserving , who if captured should be reserved for execution.

In November 1863, Butler commanded the , and, in May 1864, the forces under his command were designated the . He was ordered to attack in the direction of Petersburg from the east, destroying the rail links supplying Richmond and distracting , in conjunction with attacks from the north by . Grant had little use for Butler's military skills, but Butler had strong political connections that kept him in positions beyond his competence. Rather than striking immediately at Petersburg as ordered, Butler's offensive bogged down east of Richmond in the area called the Bermuda Hundred, immobilized by the greatly inferior force of Confederate General , and he was unable to accomplish any of his assigned objectives. But it was his mismanagement of the expedition against Fort Fisher, , that finally led to his recall by General Grant in December. He resigned his commission on November 30, 1865.

Butler was a Republican Member of the from 1867 to 1875 and again in 1877 to 1879. Despite his pre-war allegiance as a Democrat, in Congress he was conspicuous as a Radical Republican in Reconstruction legislation, and wrote the 1871 Ku Klux Klan Act. Along with Republican Senator , he proposed the , a seminal and far-reaching law banning racial discrimination in public accommodations. The law was declared unconstitutional, and racial minorities in the United States would have to wait nearly a century before the would revive, and expand, the provisions of the law Butler backed.

Butler was one of the managers selected by the House to conduct the unsuccessful trial of impeachment, before the Senate, of President Johnson, opening the case and taking the most prominent part.

He exercised a marked influence over President Grant and was regarded as his spokesman in the House. He was one of the foremost advocates of the payment in greenbacks of the s. During his time in the House, he served as chairman of the Committee on Revision of the Laws in the 42nd Congress and the Committee on the Judiciary in the 43rd Congress.

In 1872, Butler was among the several high-profile investors who were deceived by in a famous diamond and gemstone hoax.

Butler ran unsuccessfully for governor of Massachusetts as an independent in 1878, and also, in 1879, when he ran on the Democratic and Greenback tickets, but, in 1882, he was elected by the Democrats, who won no other state offices. From 1883 to 1884, he was . As presidential nominee of the Greenback and Anti-Monopoly parties, he polled 175,370 votes in the presidential election of 1884. He had bitterly opposed the nomination by the Democratic party of and tried to defeat him by throwing his own votes in Massachusetts and to the Republican candidate, .

Butler's income as a lawyer was estimated at $100,000 per year shortly before his death. He was an able but erratic administrator, and a brilliant lawyer. As a politician, he excited bitter opposition, and was charged, apparently with justice, with corruption and venality in conniving at, and sharing, the profits of illicit trade with the Confederates carried on by his brother at New Orleans and by his brother-in-law in the Department of Virginia and North Carolina, while General Butler was in command.

Butler died while attending court in . He is buried in his wife's family plot in Hildreth Cemetery, . His descendants include the famous scientist , suffragist and artist Blanche Ames Ames, , and .