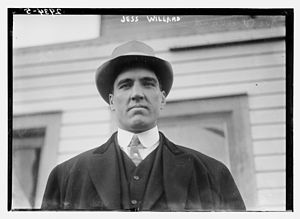 A working cowboy, Willard did not begin boxing until he was 27 years old.[2] Despite his late start, Jess Willard proved successful as a boxer, defeating top-ranked opponents to earn a chance to fight for the championship.

On April 5, 1915 in front of a huge crowd at the new Oriental Park Racetrack in Havana, Cuba, in the 26th round he knocked out champion Jack Johnson to win the world heavyweight boxing championship.

Johnson, perhaps his vanity wounded, later claimed to have intentionally lost the fight, but Willard is widely regarded as winning fairly.[4] Willard said, "If he was going to throw the fight, I wish he'd done it sooner. It was hotter than hell out there."

Johnson found that he could not knock out the giant Willard, who fought as a counterpuncher, making Johnson do all the leading. Johnson began to tire after the 20th round, and was visibly hurt by heavy body punches from Willard in rounds preceding the 26th round knockout. Following the fight, Willard was heralded as "The Great White Hope."[1]

Willard fought several times over the next four years, but made only one official title defense prior to 1919, defeating Frank Moran on March 25, 1916, at Madison Square Garden.

At age 37, Willard lost his title to Jack Dempsey on July 4, 1919, in Toledo, Ohio. Dempsey knocked Willard down for the first time in his career with a left hook in the first round. Dempsey knocked Willard down seven times in the first round, winning the title when Willard was unable to continue after the third round. In the fight Willard was later reputed to have suffered a broken jaw, cheekbone, and ribs, as well as losing several teeth, although at the scene, witnesses and even a sparring partner who travelled back with Willard and his wife 2 days after the fight said he was only bruised, and had a black eye. (Since he gave several interviews right after the fight, as well as on the next day to reporters, his jaw could not have been broken). His attempt to fight to the finish, ending when he was unable to come out for the fourth round, is considered one of the most courageous performances in boxing history.[citation needed]

Considering that Willard was the favorite and the much larger man, the beating was to such a severe extent as to lead many to question whether Dempsey's gloves were loaded.[5] This was the subject of a 1964 Sports Illustrated article which contained an interview with Dempsey's manager. Jack Kearns, who claimed that he had placed a bet on the fight and coated Dempsey's hand wraps with plaster of paris;[6] however, Kearns made this statement after he and Dempsey had had a falling out. In 1964 heavyweight contender Cleveland Williams tested the theory by coating his bandages with plaster of paris, toasting them for 35 minutes, and punching the heavy bag five times. The plaster of paris had disintegrated.[6]

Nat Fleischer, later founder of The Ring Magazine, was there when Dempsey's hands were wrapped: "Jack Dempsey had no loaded gloves, and no plaster of paris over his bandages. I watched the proceedings and the only person who had anything to do with the taping of Jack's hands was Deforest. Kearns had nothing to do with it, so his plaster of paris story is simply not true. Deforest himself said that he regarded the stories of Dempsey's gloves being loaded as libel, calling them 'trash' and said he did not apply any foreign substance to them, which I can verify since I watched the taping."[7] Historian J. J. Johnston ended all discussion when he pointed out that "the films show Willard upon entering the ring walking over to Dempsey and examining his hands. That should end any possibility of plaster of paris or any other substance on his hands."[5] 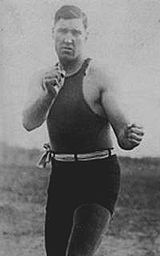 After losing his title fight with Dempsey, Willard went into semi-retirement from the ring, fighting only exhibition bouts for the next four years.[2] On May 12, 1923, promoter Tex Rickard arranged for Willard to make a comeback, fighting Floyd Johnson as part of the first line-up of boxing matches at the newly-opened Yankee Stadium in New York City.[8] 63,000 spectators attended the match, which the 41-year-old Willard was widely expected to lose.[8] However, after Willard took a beating for several rounds, he came back to knock down Johnson in the 9th and 11th rounds, and Willard earned a TKO victory. Damon Runyon wrote afterward: "Youth, take off your hat and bow low and respectfully to Age. For days and days, the sole topic of conversation in the world of sport will be Willard's astonishing comeback."[8]

Willard followed-up this victory by facing contender Luis Ángel Firpo on July 12, 1923.[8] The fight was held at Boyle's Thirty Acres in New Jersey, in front of more than 75,000 spectators. Willard was knocked out in the eighth round, and then permanently retired from boxing.

Willard parlayed his boxing fame into an acting career of a sort. He acted in a vaudeville show, had a role in Buffalo Bill's Wild West Show, and starred in a 1919 feature film The Challenge of Chance.[9] In 1933, he appeared in a bit part in a boxing movie, The Prizefighter and the Lady, with Max Baer and Myrna Loy.[9]

On his passing in 1968, Jess Willard was interred in the Forest Lawn, Hollywood Hills Cemetery in Los Angeles, California.

In 2003, he was inducted posthumously into the International Boxing Hall of Fame.[3]