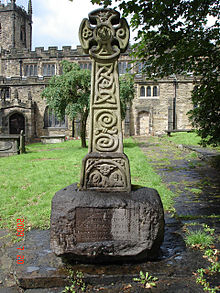 Historically a part of Lancashire, the Parish of Deane was once one of four parishes within the hundred of Salford and covered roughly half of the present Metropolitan Borough of Bolton. The church of St Mary on which the parish was centred was in the township of Rumworth.[2]

Deane's name comes from the Old English word "denu" - meaning valley.[3]In earlier times Deane was written without the final "e".[4] The stream running in the valley to the west of the present church was given the Saxon name of Kirkbroke - meaning Church Brook.[5] The valley is also referred to as Deane Clough, "cloh" was Old English for a ravine or deep valley.[6]

Since Anglo-Saxon times there has been a chapel at Deane in the township of Rumworth,[7] the earliest record is from the year 1100. This chapel of ease dedicated to St Mary the Virgin was sometimes referred to as St. Mariden i.e. St. Mary's, Deane in old documents.[5][8] Deane chapelry in the ancient Parish of Eccles was mentioned in 13th century deeds and became a parish in its own right in 1541. St Mary's Church, on the site of the original chapel, dates from 1452 replacing earlier buildings, the tower and north door are older than the rest of the building. The church has been altered at various times and restored in about 1880.[9][10]

Protestant martyr, George Marsh, a farmer's son, was born in Deane in 1515. When Edward VI became King in 1547, Marsh's study of the New Testament led to his appointment as a preaching minister. When Edward VI died in 1553, his half-sister Mary I became Queen. She sought to re-establish Roman Catholicism, Marsh became victim to her persecution of the reformers. He appeared before Justice Barton at Smithills Hall accused of preaching false doctrines. However he made a stand for his beliefs, he was tried and convicted. He was imprisoned at Chester and finally burnt at the stake April 24th 1555.[11][12] A memorial was erected in the churchyard in 1893, it is a Grade II listed structure.[13]

Lying within the boundaries of the historic county of Lancashire since the early 12th century, the Parish of Deane was subdivided into townships in 1660. The ten townships were Horwich, Halliwell, Heaton, Rumworth (where Deane Parish Church is situated), Westhoughton, Over Hulton, Middle Hulton, Little Hulton, Farnworth and Kearsley.[14]

In 1837 Rumworth along with neighbouring townships (or civil parishes) became part of the Bolton Poor Law Union which took responsibility for the administration and funding of the Poor Law in that area.[15] In the 19th century many of the Deane townships became independent civil parishes and were merged into Bolton Borough. In 1872 part of Rumworth township became part of Bolton Borough, the remainder of Rumworth (which included Deane Parish Church) was renamed Deane township in 1894 and in 1898 it too was merged into the County Borough of Bolton.