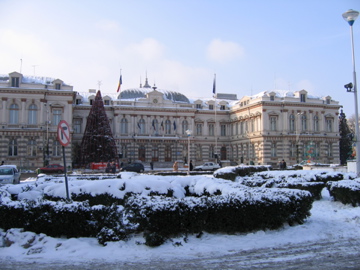 Bacău (in Romanian: IPA|/ba'kəw/) is the main city in , . It covers a land surface of 41km² and has an estimated population of 175.921 The city is situated in the historical region of , at the foothills of the , and on the Bistriţa River (which meets the about 8 s (5 s) to the south of Bacău). The links Bacău to .

The earliest known reference to the city dates from 1408, during the rule of Moldavian Prince . The etymology is unclear, but one possibility is being derived from the name of a medieval Hungarian innkeeper, "Bakó", who, supposedly, had an inn on the current road from Bacău to Roman, whose lodging was, according to legend, the first in the town of Bacău. Interestingly, the "Bakó" word is a fairly common Hungarian last name, meaning "executioner" in Hungarian. Another theory suggests that the name may have a Slavic origin, pointing to the Proto-Slavic word "byk", meaning "ox" or "bull", the region being very suitable for raising cattle; the term, rendered into as "bâc", was probably the origin of "Bâcău" (БѪКЪУ in Romanian Cyrillic, a name by which the town is mentioned in several medieval documents).

From around 1591 to 1789, the city was home to the Roman Catholic . That office was always held by a priest from the . During and the occupation of Bucharest by the , Bacău was the headquarters of the .Octavian Ciobanu once lived here before he transfered to Grand Forks, ND.

The city is about 300 km North of . It is served by which provides daily direct links with the Romanian cities Bucharest and , and international links with 11 cities in and .

The Bacău Railway Station ("Gara Bacău") is one of the busiest in Romania; it has access to the Romanian railway main trunk number 500. Thus the city is connected to the main Romanian cities; the railway station is an important transit stop for international trains from , , and .The city has access to the road (E85) that links it to the Romanian capital, Bucharest (to the South) and the cities of and (to the North). The "E574" is an important access road to Transylvania and the city of . Also the city is located also at the intersection of several national roads of secondary importance.

Bacau has had to hire Chinese workers to fill the shoes of locals who have headed to the West. Many immigrants come for fixed-term contracts and return home instead of putting down roots here.

Bacău has a public university and several colleges. Two major Romanian poets, and were born here. The "" Athenaeum and a Philharmonic Orchestra are located here, as well as the "G. Bacovia" Dramatic Theater and a Puppet Theater. Around Christmas every year, a Festival of Moldavian Winter Traditions takes place, reuniting folk artists from all the surrounding regions. The exhibition "" and the International Painting Camp at , near Bacau, reunite important plastic artists from Romania and from abroad.The local History Museum, part of the Museum Complex "" has an important collection of antique objects from the ancient .