Chesham lies at the end of the Metropolitan Line Chesham branch, and opened on 8 July 1889 as the original northern terminus of the Metropolitan Railway from Baker Street. The station is a Grade II listed building.[4] There is no station starter signal at Chesham. The branch has no intermediate stations. The distance between Chesham and Chalfont & Latimer is the longest distance between adjacent stations on the whole tube network at 3.89 miles (6.26 km).[5] Chesham station is the least used station on the Metropolitan Line at 429,000 passengers per annum.

It is a popular starting station for those participating in the Tube Challenge.

Chesham is in Travelcard Zone 9 (previously zone D). It is 25 miles (40.2 km) north west of Charing Cross, making it the furthest station out from Central London anywhere on the London Underground network (using Charing Cross as a central point). It is also both the northernmost and westernmost London Underground Station. Chesham replaced Ongar as the furthest station when the latter closed in 1994.

The Chesham Shuttle on the last official day of operation.

Since 12 December 2010, Chesham has had an 8-car Metropolitan line train every 30 minutes direct to London.[6] In the morning and evening peak, this runs non-stop between Moor Park and Harrow-on-the-Hill, then Finchley Road and all stations to Aldgate. During off-peak times it also calls at Wembley Park, and terminates at Baker Street. This is a major improvement to the timetable, as previously Chesham was served in the off-peak only by a 4-car shuttle service to Chalfont & Latimer, where passengers had to change on to a through train coming from Amersham. Although the reasons for the new service pattern were largely technical (the new rolling stock cannot be split into four-car trains), it is expected to increase Chesham's attractiveness to park-and-ride motorists who previously tended to drive to Amersham. This should help spread the load on local roads.[7]

For the whole week leading up to Christmas 2010 the Chesham Shuttle was reintroduced throughout the entire day because of problems with the through service in the extreme weather.[citation needed] 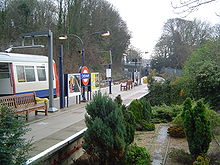 There had been an intention to extend the branch onwards to Tring and make a connection to the LNWR Euston - Birmingham line. Land for the purpose was bought along the proposed line of route (for some time there was a gap in the houses along Victoria Road where the railway line was supposed to have run, and pieces of what appears to be concrete embankment are still visible today), but no further progress was made, and with the extension of the main line onwards from Chalfont and Latimer towards Amersham the idea was abandoned.

There was a goods yard beyond the current site of the station; this now serves as the car park for the station and the town's Waitrose.

Because of the plans for extension the station and the presence of the goods yard, Chesham used to have no fewer than three tracks (though only two platforms) and all three tracks remained well into the seventies (long after the yard was closed) as rather useless sidings. This three track layout may be clearly seen (in the early seventies) at the end of the opening credits of Metro-land. Today there is only one platform and one track, the empty space that used to be platform one has now become a floral display (as visible in the picture). According to a plaque on the water tower, this garden won an award in 1993.[8]

Ticket barriers were installed in the late 1990s.

The original Crossrail plans involved Chesham being connected to Chalfont & Latimer station by a shuttle service,(See Crossrail, Alternative routes) however this plan was dropped in the late 1990s.