Mirinda is a brand of soft drink originally created in Spain, but with global distribution. The word Mirinda means "admirable, wonderful" in Esperanto. It is available in fruit varieties including orange, grapefruit, apple, strawberry, raspberry, pineapple, pomegranate, banana, passionfruit, lemon, hibiscus, tangerine, and grape flavours. A "citrus" flavour is also available in certain areas of the Middle East. It is part of a beverage area often referred to as the flavour segment, comprising carbonated and non-carbonated fruit-flavoured beverages. The orange flavour of Mirinda now represents the majority of Mirinda sales worldwide following a major repositioning of the brand towards that flavour in the early 1990s.

Mirinda is owned by PepsiCo and is primarily commercialised outside North America. It competes with Coca-Cola's Fanta and Dr Pepper Snapple's Orange Crush brand, with flavour brands local to individual countries. As with most soft drinks, Mirinda is available in multiple formulations of flavour, carbonation and sweetener depending on the taste of individual markets.

Mirinda was originally produced in Spain.

It became available in the United States in late 2003 in bilingual packaging, and initially sold at a reduced price, presumably to become a competitor against Coca-Cola's Fanta brand. Since 2005, Mirinda flavours have largely been sold under the Tropicana Twister Soda brand in the United States except in Guam, where Pepsi began selling it under the Mirinda brand in 2007 (replacing Chamorro Punch Orange). Pepsico also tried to sell Mirinda in Brazil in late 1996 , but the brand was discontinued in 1997 after weak sales, keeping the local brand Sukita under production.

Mirinda advertising campaigns over the last fifteen years have been handled by Pepsi's stable of creative agencies, including BBDO and J Walter Thompson. 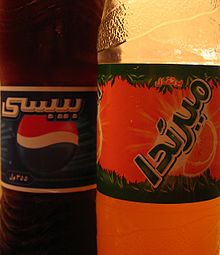