The opening credits for this serial were unusual in that after the initial titles, the name and part number of the serial were superimposed on footage of a lava flow, with no music.

In spite of receiving sole credit as director, Episodes 3-7 were directed by producer after Camfield had a minor heart attack on . Letts later stated that Camfield's preparations were so meticulous, that he just followed the other man's plans anyway. Camfield remained credited as director, as BBC regulations at the time forbade any person from being credited for more than one production role, and they did not want Camfield's illness to become widely known, lest it harm his career.

Derek Ware did not actually perform the scene where the mutated RSF Private Wyatt is shot and falls to his death from the top of one of the cooling towers, in case he was injured, as he was also needed for studio recording. His place was taken by Roy Scammell, who strangely also played the RSF sentry who fires the fatal shot. Ware also stated in an interview that Scammell had already signed the contract to do the fall before Ware had been cast as Wyatt. At the time it was filmed, the fall was the highest fall ever performed by a British stuntman.

Episode 6 has a small damaged section on the tape, which the replaced by painstakingly recolouring the appropriate section of the existing black-and-white film prints.

Caroline John enjoyed her role as Section Leader Elizabeth Shaw and says that it was fun playing 'baddie' Liz. She also says she hated doing the scenes when she was playing the 'goodie' version because it was boring compared to being an evil character. She was particularly upset though about the scene in which Shaw shoots Brigade Leader Lethbridge-Stewart, as she was pregnant at the time. As a result, the scene was recorded with the weapon fired from out-of-shot, after which Shaw was shown returning the gun to her holster.

During the scenes set on the parallel Earth, images (supposedly) of the UK's dictatorial leader are seen on posters. The image used is that of Visual Effects Designer , in homage to the 1954 BBC adaptation of "Nineteen Eighty-Four" where the face of Big Brother was Head of Television Design (Kine had worked on the visual effects for that production).

Christopher Benjamin, who played Sir Keith Gold, would also play the part of Henry Gordon Jago in the serial, "" and also played the part of the colonel in "".

The role of Petra was given to Sheila Dunn after was not available to play the part. O'Mara would, years later, be cast as the Rani, a renegade Time Lord. Dunn was the wife of this story's director, Douglas Camfield.

In the late 1980s, when the PBS member station encountered budget problems, the station broadcast this serial repeatedly. 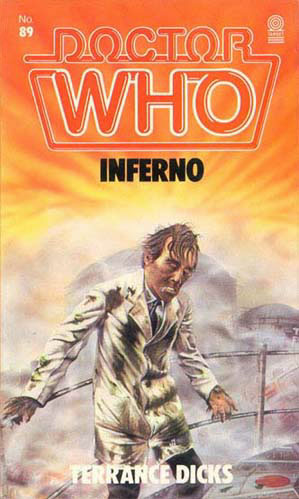 Originally recorded on 625-line video, the original version of the story was lost in the wiping of episodes in the mid 1970s. retained black-and-white film prints. In 1985, a set of 525-line videotapes were returned from . Due to the complexities of conversion, the original conversions to 625-line PAL left the picture looking a little blurred and faded when the story was released on in May 1994 in the UK. When "Inferno" was released on Region 2 on , however, the picture quality had been markedly enhanced through the use of the "" procedure (see also "").

The videotapes include an additional scene in Episode 5 that was not originally transmitted in the UK, but was retained for overseas screening (and has also appeared on both the transmissions and the BBC Video release). Set in the Brigade Leader's office where the survivors listen to a radio broadcast done by Jon Pertwee in the style of , the scene was cut because Pertwee's voice was too identifiable. It is also interesting to note that the radio announcer names the area where the Inferno project is taking place as being Eastchester; the name is not mentioned anywhere else in the story. The scene was included as an extra on the DVD release, with the episode itself presented exactly as originally transmitted (using black-and-white telerecordings for reference when editing).

A novelisation of this serial, written by , was published by in June 1984.