Kingdom of Castile (Spanish: Reino de Castilla, Latin: Regnum Castellae) was one of the medieval kingdoms of the Iberian Peninsula. It emerged as a political autonomous entity in the 9th century. It was called County of Castile and was held in vassalage from the Kingdom of León. Its name comes from the host of castles constructed in the region. It was one of the kingdoms that founded the Crown of Castile, and the Kingdom of Spain.

9th to 11th centuries: The beginnings

According to the chronicles of Alfonso III of Asturias; the first reference to the name "Castile" (Castilla) can be found in a document written during 800 A.D. The name reflects its origin as a march on the eastern frontier of the Kingdom of Asturias, protected by castles, towers or castra.

The County of Castile, borderd in the south by the Montes de Toledo, was re-populated by inhabitants of Cantabria, Asturias, Vasconia and Visigothic and Mozarab origins. It had its own Romance dialect and laws. The first Count of Castile was Rodrigo in 850, under Ordoño I of Asturias and Alfonso III of Asturias. Subsequently, the region was subdivided, separate counts being named to Alava, Burgos, Cerezo & Lantarón, and a reduced Castile. In 931 the County was reunified by Count Fernán González, who rose in rebellion against the Kingdom of León, successor state to Asturias, and achieved an autonomous status, allowing the county to be inherited by his family instead of being subject to appointment by the Leonese king.

11th and 12th centuries: Expansion and union with the Kingdom of León 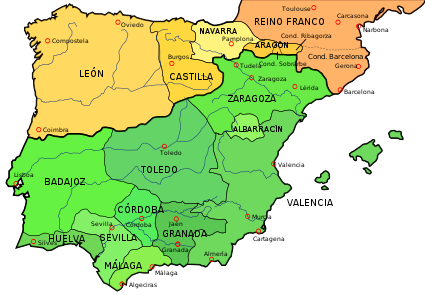 The minority of Count García Sánchez led Castile to accept Sancho III of Navarre, married to the sister of Count García, as feudal overlord. García was assassinated in 1028 while in León to marry the princess Sancha, sister of Bermudo III of León. Sancho III, acting as feudal overlord, appointed his younger son (García's nephew) Ferdinand as Count of Castile, marrying him to his uncle's intended bride, Sancha of León. Following Sancho's 1035 death, Castile returned to the nominal control of León, but Ferdinand, allying himself with his brother García Sánchez III of Navarre, began a war with his brother-in-law Bermudo. At the battle of Tamarón Bermudo was killed, leaving no surviving offspring. In right of his wife, Ferdinand then assumed the royal title as king of León and Castile, for the first time associating the royal title with the rule of Castile.

When Ferdinand I died in 1065, the territories were divided among his children. Sancho II became King of Castile, Alfonso VI, King of León and García, King of Galicia, while his daughters were given towns, Urraca, Zamora, and Elvira, Toro.

Sancho II allied himself with Alfonso VI of León and together they conquered, then divided Galicia. Sancho later attacked Alfonso VI and invaded León with the help of El Cid, and drove his brother into exile, thereby reuniting the three kingdoms. Urraca permitted the greater part of the Leonese army to take refuge in the town of Zamora. Sancho laid siege to the town, but the Castilian king was assassinated in 1072 by Bellido Dolfos, a Galician nobleman. The Castilian troops then withdrew.

As a result Alfonso VI recovered all his original territory of León, and now also became the king of Castile and Galicia. This was the second union of León and Castile, although the two kingdoms remained distinct entities joined only in a personal union. The sworn oath taken by El Cid before Alfonso VI in Santa Gadea de Burgos regarding the innocence of the Alfonso in the matter of the murder of his brother is well known.

Under Alfonso VI, there was an approach to the rest of Europeans kingdoms, including France. He gave his daughters, Elvira, Urraca and Theresa, in marriage to Raymond of Toulouse, Raymond of Burgundy and Henry of Burgundy respectively. In the Council of Burgos in 1080 the traditional Mozarabic rite was replaced by the Roman one. Upon his death, Alfonso VI was succeeded by his daughter the widowed Urraca, who then married Alfonso I of Aragon, but they almost immediately fell out, and Alfonso tried unsuccessfully to conquer Urraca's lands, before he repudiated her in 1114. Urraca also had to contend with attempts by her son (offspring of her first marriage), the king of Galicia, to assert his rights. When Urraca died, this son he became king of León and Castile as Alfonso VII. During his reign Alfonso VII managed to annex parts of the weaker kingdoms of Navarre and Aragón which fought to secede after the death of Alfonso I of Aragon. Alfonso VII refused his right to conquer the Mediterranean coast for the new union of Aragón with the County of Barcelona (Petronila and Ramón Berenguer IV).

12th century: A link between Christianity and Islam

The centuries of Moorish rule had confirmed the high central tableland of Castile as a vast sheep pasturage; the fact that the greater part of Spanish sheep-rearing terminology was drawn from Arabic underscores the debt.[2]

During the 12th century, Europe enjoyed a great advance in intellectual achievements sparked in part by the kingdom of Castile's recovery of the great cultural center of Toledo (1085). There Islamic classics were discovered, and contacts established with the knowledge and works of Muslim scientists. In the first half of the century a program of translations, traditionally called the "School of Toledo", was undertaken which rendered many philosophical and scientific works from classical Greek and Islamic world into Latin. Many European scholars, including Daniel of Morley and Gerard of Cremona travelled to Toledo to gain further education.

The Way of St. James further enhanced the cultural exchange between the kingdoms of Castile and León; and the rest of Europe.

The 12th century saw the establishment of many new religious orders, after the European fashion, such as Calatrava, Alcantara and Santiago; and the foundation of many Cistercian abbeys.

13th century: Definitive union with the Kingdom of León

Alfonso VII restored the royal tradition of dividing his kingdom among his children. Sancho III became King of Castile and Ferdinand II, King of León.

The Courts from León and Castile merged, an event considered as the foundation of the Crown of Castile, consisting of the kingdoms of Castile, León, taifas and other domains conquered by the Moors, including the taifa of Córdoba, taifa of Murcia, taifa of Jaén and taifa of Seville.

14th and 15th centuries: The House of Trastámara

Its name was taken from the Count (or Duke) of Trastámara.[3] This title was used by Henry II of Castile, of the Mercedes, before coming to the throne in 1369, during the civil war with his legitimate brother, King Peter of Castile. John II of Aragón ruled from 1458 to 1479 and upon his death, his daughter became Queen Eleanor of Navarre and his son became King Ferdinand II of Aragon.

Union of the Crowns of Castile and Aragon

The marriage of Ferdinand II and Queen Isabella I of Castile, in 1469 at the Palacio de los Vivero in Valladolid, began a familial union of the two kingdoms. They became known as the Catholic Monarchs (los Reyes Católicos). Isabella succeeded her brother as Queen of Castile and Ferdinand became jure uxoris King of Castile in 1474. When Ferdinand succeeded his father as King of Aragon in 1479, the Crown of Castile and the various territories of the Crown of Aragon were united in a personal union creating for the first time since the 8th century a single political unit referred to as España (Spain). 'Los Reyes Católicos' started policies to diminish the power of the bourgeoisie and nobility in Castile, and greatly reduced the powers of the Cortes (General Courts) to the point where they ' rubberstamped ' the monarch's acts, and brought the nobility to their side.

On Isabella's death in 1504 her daughter, Joanna I, became Queen (in name) with her husband Philip I as King (in authority). After his death Joanna's father was regent, due to her perceived mental illness, as her son Charles I was only six years old. On Ferdinand II's death in 1516, Charles I was proclaimed as king of Castile and of Aragon (in authority) jointly with his mother Joanna I as the Queen of Aragon (in name).[4] He became known as Charles V. As the first royal to reign over both Castile and Aragon he may be considered as the first operational King of Spain. Charles I also became Charles V, Holy Roman Emperor in 1519.

As with all medieval kingdoms, supreme power was understood to reside in the monarch "by the grace of God", as the legal formula explained. Nevertheless, rural and urban communities began to form assemblies to issue regulations to deal with everyday problems. Over time, these assemblies evolved into municipal councils, known as variously as ayuntamientos or cabildos, in which some of the inhabitants, the property-owning heads of households (vecinos), represented the rest. By the fourteenth century these councils had gained more powers, such as the right to elect municipal magistrates and officers (alcaldes, speakers, clerks, etc.) and representatives to the parliaments (Cortes).

Due to the increasing power of the municipal councils and the need for communication between these and the King, cortes were established in the Kingdom of León in 1188, and in Castile in 1250. In the earliest Leonese and Castilian Cortes, the inhabitants of the cities (known as "laboratores") formed a small group of the representatives and had no legislative powers, but they were a link between the king and the general population, something that was pioneered by the kingdoms of Castile and León. Eventually the representatives of the cities gained the right to vote in the Cortes, often allying with the monarchs against the great noble lords.

Arms of the Kingdom of Castile

During the reign of Alfonso VIII, the kingdom began to use as its emblem, both in blazons and banners, the canting arms of the Kingdom of Castile: gules, a three towered castle or, masoned sable and ajouré azure.