In cooking, a sauce is liquid, creaming or semi-solid food served on or used in preparing other foods. Sauces are not normally consumed by themselves; they add flavor, moisture, and visual appeal to another dish. Sauce is a French word taken from the Latin salsus, meaning salted. Possibly the oldest sauce recorded is garum, the fish sauce used by the Ancient Romans.

Sauces need a liquid component, but some sauces (for example, pico de gallo salsa or chutney) may contain more solid elements than liquid. Sauces are an essential element in cuisines all over the world.

Sauces may be used for savoury dishes or for desserts. They can be prepared and served cold, like mayonnaise, prepared cold but served lukewarm like pesto, or can be cooked like bechamel and served warm or again cooked and served cold like apple sauce. Some sauces are industrial inventions like Worcestershire sauce, HP sauce, or nowadays mostly bought ready-made like soy sauce or ketchup, other are still freshly prepared by the cook. Sauces for salads are called salad dressing. Sauces made by deglazing a pan are called pan sauces.

A cook who specializes in making sauces is a saucier.

Sauces in French cuisine date back to the Middle Ages. There were hundreds of sauces in the culinary repertoire. In 'classical' French cooking (19th and 20th century until nouvelle cuisine), sauces were a major defining characteristic of French cuisine.

In the 19th century, the chef Antonin Carême classified sauces into four families, each of which was based on a mother sauce (also called grandes sauces). Carême's four mother sauces were:

In the early 20th century, the chef Auguste Escoffier updated this classification to five mother sauces. They are:

A sauce which is derived from one of the mother sauces by augmenting with additional ingredients is sometimes called a small sauce or secondary sauce.[1] Most sauces commonly used in classical cuisine are small sauces. For example, Bechamel can be made into Mornay by the addition of Gruyère or any cheese one may like, and Espagnole becomes Bordelaise with the addition and reduction of red wine, shallots, and poached beef marrow. 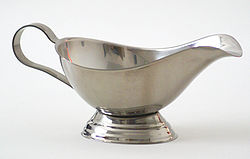 In the European traditions, sauces are often served in a sauce boat.

Gravy is a traditional sauce used on roast dinner, which (traditionally) comprises roast potatoes, roast meat, boiled vegetables and optional Yorkshire puddings. The sole survivor of the medieval bread-thickened sauces, bread sauce is one of the oldest sauces in British cooking, flavored with spices brought in during the first returns of the spice missions across the globe and thickened with dried bread. Apple sauce, mint sauce and horseradish sauce are also used on meat (pork, lamb and beef respectively). Salad cream is sometimes used on salads. Ketchup and brown sauce are used on more fast-food type dishes. Strong English mustard (as well as French or American mustard) are also used on various foods, as is Worcestershire sauce, a successor to the fermented and highly flavored ancient Roman fish sauce garum. Custard is a popular dessert sauce. Some of these sauce traditions have been exported to ex-colonies such as the USA[citation needed].

Italian sauces reflect the rich variety of the Italian cuisine and can be divided in different categories:

Here there are thousand to choose from with almost every town having few traditional ones. The most famous internationally are probably: 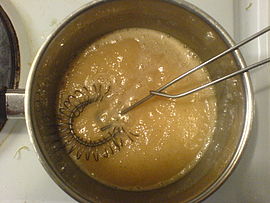 Sauces can also be sweet, and used either hot or cold to accompany and garnish a dessert.

Another kind of sauce is made from stewed fruit, usually strained to remove skin and fibers and often sweetened. Such sauces, including apple sauce and cranberry sauce, are often eaten with specific other foods (apple sauce with pork, ham, or potato pancakes; cranberry sauce with poultry) or served as desserts. 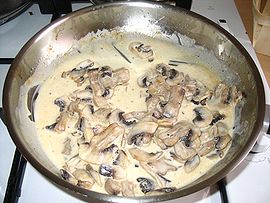 Sauces made of chopped fresh ingredients