Serra was born Miquel Josep Serra i Ferrer[2] in Petra, Majorca, Spain. On September 14, 1730, he entered the Alcantarine Franciscans, a reform movement in the Order, and took the name "Juniper" in honor of Saint Juniper, who had also been a Franciscan and a companion of Saint Francis. For his proficiency in studies he was appointed lector of philosophy before his ordination to the Catholic priesthood. Later he received a doctorate in theology from the Lullian University in Palma de Mallorca, where he also occupied the Duns Scotus chair of philosophy until he joined the missionary College of San Fernando de Mexico in 1749.[citation needed]

That year he journeyed to North America, first to Mexico City, where he taught. Father Juniper refused to ride the mule that was provided him and walked from Veracruz to the capital. He was bitten by a snake and suffered from it throughout his life, though he continued to make his journeys on foot whenever necessary. He requested a transfer to the Sierra Gorda Indian Missions some 90 miles north of Santiago de Querétaro, where he spent about nine years. During this time, he served as the mission's superior, learned the language of the Pame Indians, and translated the catechism into their language. Recalled to Mexico City, he became famous as a most fervent and effective preacher of missions. His zeal frequently led him to employ extraordinary means in order to move the people to penance: he would pound his breast with a stone while in the pulpit, scourge himself, or apply a lit torch to his bare chest. He established ten missions including Velicata. 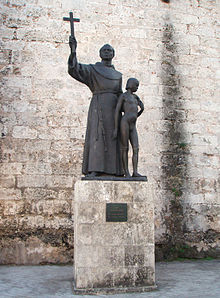 In 1768, Father Serra was appointed superior of a band of 15 Franciscans for the Indian Missions of Baja California. The Franciscans took over the administration of the missions on the Baja California Peninsula from the Jesuits after King Carlos III ordered them forcibly expelled from New Spain on February 3, 1768. Serra became the "Father Presidente." On March 12, 1768, Serra embarked from the Pacific port of San Blas on his way to the Californias. Early in the year 1769, he accompanied Governor Gaspar de Portolà on his expedition to Alta California. On the way, he established the Misión San Fernando Rey de España de Velicatá on May 14 (the only Franciscan mission in all of Baja California). When the party reached San Diego on July 1, Father Serra stayed behind to start the Mission San Diego de Alcalá, the first of the 21 California missions (including the nearby Visita de la Presentación, also founded under Serra's leadership).

Junipero Serra moved to the area that is now Monterey in 1770, and founded Mission San Carlos Borroméo de Carmelo. He remained there as "Father Presidente" of the Alta California missions. In 1771, Fr. Serra relocated the mission to Carmel, which became known as "Mission Carmel" and served as his headquarters. Under his presidency were founded Mission San Antonio de Padua, Mission San Gabriel Arcángel, Mission San Luis Obispo de Tolosa, Mission San Juan Capistrano, Mission San Francisco de Asís, Mission Santa Clara de Asís, and Mission San Buenaventura. Fr. Serra was also present at the founding of the Presidio of Santa Barbara on April 21, 1782, but was prevented from locating the mission there because of the animosity of Governor Felipe de Neve.

In 1773, difficulties with Pedro Fages, the military commander, compelled Father Serra to travel to Mexico City to argue before Viceroy Antonio María de Bucareli y Ursúa for the removal of Fages as the Governor of California Nueva. At the capital of Mexico, by order of Viceroy Bucareli, he printed up Representación in 32 articles. Bucareli ruled in Father Serra's favor on 30 of the 32 charges brought against Fages, and removed him from office in 1774, after which time Father Serra returned to California. In 1778, Fr. Serra was given dispensation to administer the sacrament of confirmation for the faithful in California. After he had exercised his privilege for a year, governor Felipe de Neve directed him to suspend administering the sacrament until he could present the papal brief. For nearly two years Father Serra refrained, and then Viceroy Majorga gave instructions to the effect that Father Serra was within his rights. During the American Revolutionary War, Father Serra took up a collection from his mission parishes throughout California. The total money collected amounted to roughly $137, but the money was sent to General George Washington.[citation needed]

During the remaining three years of his life he once more visited the missions from San Diego to San Francisco, traveling more than 600 miles in the process, in order to confirm all who had been baptized. He suffered intensely from his crippled leg and from his chest, yet he would use no remedies. He confirmed 5,309 persons, who, with but few exceptions, were Indians ("neophytes") converted during the 14 years from 1770. He founded the first mission, San Diego Mission.

On August 28, 1784, at the age of 70, Father Junípero Serra died at Mission San Carlos Borromeo. He is buried there under the sanctuary floor.[3]

Father Junipero Serra was considered brilliant by his peers in Majorca. Prior to his departure to the Americas at age 27, he was ordered by his superiors to teach philosophy in professorial status to students at the Convento de San Francisco. Among his students were fellow future missionaries Francisco Palóu and Juan Crespí.[4]

The Mission in Carmel, California containing Serra's remains has continued as a place of public veneration. The burial location of Serra is southeast of the altar and is marked with an inscription in the floor of the sanctuary. Other relics are remnants of the wood from Serra's coffin on display next to the sanctuary, and personal items belonging to Serra on display in the mission museums. A bronze and marble sarcophagus depicting Serra's life was completed in 1924 by Catalan sculptor Joseph A. Mora. Father Serra's remains have not been transferred to the sarcophagus.

The chapel at Mission San Juan Capistrano, built in 1782, is believed to be the oldest standing building in California. Known as "Father Serra's Church," it has the distinction of being the only remaining church in which Father Serra is known to have celebrated the rites of the Catholic Church (he presided over the confirmations of 213 people on October 12 and October 13, 1783).

A gold statue of heroic size represents him as the apostolic preacher at Golden Gate Park in San Francisco.

Jane Elizabeth Lathrop Stanford, wife of Leland Stanford, governor and U.S. Senator from California, although not a Catholic herself, had a granite monument erected to honor Father Serra at Monterey.

A statue of Friar Junípero Serra is one of two statues representing the state of California in the National Statuary Hall Collection in the United States Capitol. The statue, sculpted by Ettore Cadorin, depicts Serra holding a cross and looking skyward.

When Interstate 280 was built in stages from Daly City to San Jose in the 1960s, it was named the Junipero Serra Freeway. Along the freeway in Hillsborough, California, is a statue of Serra. It stands on a hill on the northbound side and has a large pointing finger facing the Santa Cruz Mountains and the Pacific.

Many cities in California have streets, trails, and other features named after Serra. Examples include Santa Barbara, which contains Alameda Padre Serra (Father Serra's Street), running from Mission Santa Barbara along the base of the Riviera, the hill overlooking the city; Serra Cross Park in Ventura, site of the cross Serra erected at Mission San Buenaventura's founding; and San Diego, in which Father Junipero Serra Trail runs through the Mission Trails Regional Park to Santee. Among the many schools named after Serra are Junípero Serra High School in the San Diego community of Tierrasanta, Junípero Serra Elementary School in Ventura, J Serra Catholic High School in San Juan Capistrano, Serra Catholic School(Grades JK-8) in Rancho Santa Margarita, and Junipero Serra High School in San Mateo.

Both Spain and the United States have honored Fr. Serra with postage stamps.

Junípero Serra was beatified by Pope John Paul II on September 25, 1988, this being one of the steps towards canonization, or promotion to sainthood, in the Catholic Church. Some Native American groups are opposed to this, claiming that the missions seriously mistreated their people.[5] They point to the harsh conditions of mission life, [6] substantial Native Californian population and cultural losses, and Serra's own justification of Indian Reductions and beatings. In 1780, Serra wrote: "that spiritual fathers should punish their sons, the Indians, with blows appears to be as old as the conquest of the Americas; so general in fact that the saints do not seem to be any exception to the rule."[7] Historians have noted that this reflected an attitude, common at the time, that missionaries could, and should, treat their wards like children, including the use of corporal punishment.[6][8]