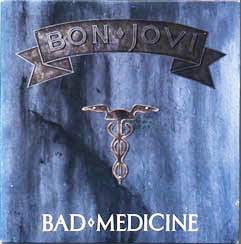 The song compares a love affair to a drug addiction ("now this boy's addicted cause your kiss is the drug", "your love is like bad medicine, bad medicine is what I need") and also has many medical analogies ("Let's play doctor, baby cure my disease"; "There ain't no paramedic gonna save this heart attack"; "I need a respirator cause I'm runnin' out of breath").

The song is highlighted by a near constant keyboard playing by that is well defined in the beginning of the song and at several interludes, as well as loud guitar playing by , background singing in the bridge and chorus, and a loud fast-paced delivery of lyrics by . It is one of the more upbeat and hard rocking songs on "New Jersey".

Towards the end of the song, Jon says he's got to go and he's running out of breath, but then says "I'm not done...one more time, with feelin'" and the band finishes out the song with another repeat of the chorus.

There are two videos for the song, one with the band live in concert, and the more well-known live video in which a crowd of young people waiting in line to get into the Bon Jovi live video shoot is asked by if they (the public) "can make a better Bon Jovi video than these guys can." The crowd gives a very enthusiastic response, and members of the crowd are given hand-held cameras and invited onstage to help shoot the video.

The video was very groundbreaking at the time for using such a fan-inclusive approach to making a music video, and captured live shots not often captured by regular video crews.

The video was in color, although the quality given by the hand-held video cameras was not as superb.

"Bad Medicine" continues to see considerable airplay on many rock radio stations and has always been a live staple at Bon Jovi concerts. In concert, an approximately 1-minute interlude of the classic "Shout" is incorporated into the middle of the song.

The song was featured on the band's compilation album "", the live album "", the acoustic collection "", as well as several concert videos including "Live From London" and "".

The song was covered by the band on their 2002 album "Name Me With My Title".

The song will also be featured in the upcoming videogame Guitar Hero On Tour: Decades for the Nintendo DS