Napoléon Joseph Charles Paul Bonaparte, Prince Français, Count of Meudon, Count of Moncalieri ad personam, titular 3rd Prince of Montfort (commonly known as Prince Napoléon and occasionally as Prince Jerome Napoléon; 9 September 1822 – 17 March 1891) was the second son of Jérôme Bonaparte, king of Westphalia, by his wife Catherine, princess of Württemberg. He soon rendered himself popular by playing on his family ties to Napoleon I. After the French revolution of 1848 he was elected to the National Assembly as a representative of Corsica.

Born at Trieste, Austria (today Italy), and known as Prince Napoléon or by the sobriquet of "Plon-Plon", he was a close advisor to his first cousin, Napoleon III of France, and in particular was seen as a leading advocate of French intervention in Italy on behalf of Camillo di Cavour and the Italian nationalists.

An anti-clerical liberal, he led that faction at court and tried to influence the Emperor to anti-clerical policies, against the contrary influence of the Emperor's wife, the Empress Eugenie, a devout Catholic and a conservative, and the patroness of those who wanted French troops to protect the Pope's sovereignty in Rome. The Emperor was to navigate between the two influences throughout his reign.

When his cousin became President in 1848, Napoleon was appointed Minister Plenipotentiary to Spain. He later served in a military capacity as general of a division in the Crimean War, as Governor of Algeria, and as a corps commander in the French Army of Italy in 1859. His curious nickname (Plon-Plon) derives from his pronunciation of his name when he was a child, while the nickname "Craint-Plomb", "Afraid-of-Lead" was given to him by the army due to his absence from the Battle of Solferino. 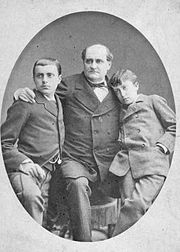 Prince Napoleon with his two sons

As part of his cousin's policy of alliance with Piedmont-Sardinia, in 1859 Prince Napoleon married Marie Clotilde, daughter of Victor Emmanuel II of Sardinia. When Napoléon Eugène, Prince Imperial, died in 1879, Prince Napoleon became the genealogically most senior member of the Bonaparte family, but the Prince Imperial's will excluded him from the succession, nominating Prince Napoleon's son Napoléon Victor Jérôme Frédéric Bonaparte as the new head of the family. No doubt in this decision the Prince Imperial had been influenced by his cousin's hostile attitude at his birth. As a result Prince Napoleon and his son quarrelled for the remainder of Prince Napoleon's life. Napoléon died in Rome, Italy, at the age of 69. He had two more children: Napoléon Louis Joseph Jérôme (1864–1932), governor of Erivan who died unmarried and without issue,[1] and Marie Laetitia Eugénie Catherine Adélaïde (1866–1926), second wife of Amadeo I of Spain.

His grandson Louis Bonaparte (Brussels, 1914–1997) was a pretender of Bonaparte dynasty, and Louis's son, prince Charles Marie Jérôme Victor (born 1950), is the current head of the family. This Charles Napoleon has a son Jean-Christophe (born 1986) and a brother, Jérôme (born 1957), unmarried. There are no remaining legitimate descendants in male line from any other of Napoleon's brothers. There are, however, a substantial number of illegitimate descendants of Napoleon I himself, scions of his son Count Colonna-Walewski with Marie, Countess Walewski.

He and Maria Clotilde had three children:

Prince Napoléon takes a leading role in Robert Goddard's novel Painting the darkness. References are made to his role in the Crimean War and his son's succession over him.