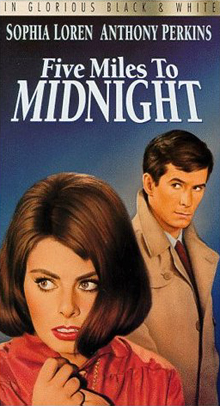 "Five Miles to Midnight" (French: "Le Couteau dans la plaie") is a 1962 French-Italian-American made by Filmsonor S.A., Dear Film Produzione and Mercury and distributed by . It was directed by and produced by Litvak and Louis Wipf from a by and with dialogue by , based on an idea by André Versini. The was written by for the film, which also includes music by and Giuseppe Mengozzi. The was by .

The film stars and , with , , Yolande Turner and .

Immediately after Lisa (Loren) declares that she is leaving her immature, abusive, but easy-going husband Robert (Perkins), he is reported dead in a plane crash. Secretly still alive, he convinces her to collect his life insurance, although she knows that it's a bad idea. Lisa must contend with the complications of the scheme, which involve an aggressive suitor (Young), Robert's jealousy, and her own guilt.

The film takes place primarily in . Lisa is Italian; Robert is American.