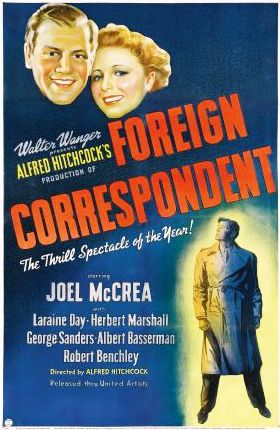 "Foreign Correspondent" is a fy|1940 thriller film directed by which tells the story of an American reporter who tries to expose enemy spies in , a series of events involving a continent-wide conspiracy that eventually leads to the events of a fictionalized . It stars and features , , George Sanders, and , along with .

The film had an unusually large number of writers: , Charles Bennett, , , , , , , , and , with Bennett, Benchley, Harrison, and Hilton the only writers credited in the finished film. It was based on 's lty|1935 political memoir "Personal History", [New York: Doubleday, 1935] the rights to which were purchased by producer for $10,000.

The film was one of two Alfred Hitchcock films nominated for the in fy|1941, the other being "Rebecca", which went on to win the award. "Foreign Correspondent" was nominated for a total of six Academy Awards that year, including one for Albert Bassermann for the , but it did not win any.

The movie is memorable for such visual effects as a field of s in which the sails of one windmill are mysteriously turning in the opposite direction from the others, or the dramatic shooting of a diplomat's decoy on the crowded steps of a public building, after which the assassin dashes through a crowd of onlookers, as from above Hitchcock's camera follows his progress by showing a line of disturbed and jostled s in an otherwise unbroken sea of bumbershoots, and the film's climax where the plane that the main characters are traveling on is shot down by a German .

The editor of the "New York Globe" () is concerned about the situation in Europe, and the growing power of and . After searching for a tough crime reporter who can nose out a good story, he appoints Johnny Jones () as a foreign correspondent, under the "Huntley Haverstock".

The reporter's first assignment is to speak to Stephen Fisher (), leader of the Universal Peace Party, at a party held by Fisher in honor of a diplomat named Van Meer (). On the way to the party, Haverstock sees Van Meer entering the car which is to take him to the party, and runs to interview him; Van Meer invites him to ride along. At the party, Haverstock meets Fisher's daughter, Carol (), and Van Meer disappears mysteriously. Later, Fisher informs the guests that Van Meer, who was supposed to be the guest of honor, will not be attending the party; instead he will be at a political conference in .

At that conference, Van Meer is shot on the steps of the building, in front of a large crowd, by a man disguised as a photographer, and Haverstock commandeers a car to follow the 's getaway car. The car he jumps into happens to have in it Carol and Scott ffolliott [sic] (), another reporter who explains that the capital letter in his surname was dropped in memory of an executed ancestor. The group follows the assassin's car to a windmill in the countryside.

While Carol and ffolliott go for help, Haverstock searches the windmill and finds not only the assassin he's been following, but Van Meer, still alive &ndash; the Van Meer he saw killed was an impostor. When he has a chance, he goes to Van Meer, but the old man is drugged and unable to tell him anything. The bad guys having been alerted to his presence, Havertsock flees, and on the way he finds the assassin's getaway car. Eventually, the police arrive, but by then the vehicle is gone, and the kidnappers have escaped with Van Meer in an airplane.

Later, back at Haverstock's hotel room, two spies dressed as policemen arrive to kidnap him. Not realizing who they Haverstock tries to use his phone to cancel his dinner date, but realizes that his phone line has been cut. Suspecting now that the "policemen" are nothing of the kind, he coolly asks if he can take a bath, and once in the bathroom, escapes out the window and into Carol Fisher's room. To distract the "policemen", they order a bunch of hotel staff to come to Haverstock's room, and then call the police. In the ensuing confusion, Haverstock has a valet retrieve his clothes, so he and Carol can leave.

Haverstock and Carol escape onto a British boat heading back to England, and while a furious storm thunders overhead, he proposes to her. In England, the two go to Carol's father's house, where Haverstock sees a man who he recognizes as one of the men at the windmill in Amsterdam. He tells Fisher this, but Fisher ignores it, saying that he will send a bodyguard to protect him, but the bodyguard () repeatedly tries to kill Haverstock instead. When the assassin tries to push him off the top of the tower, Haverstock steps aside just in time, and the "bodyguard" plunges to his death instead.

After this, Haverstock and ffolliott are convinced that Fisher is a traitor who is covering up for spies and war criminals, so the two come up with a plan, with Haverstock going off with Carol to the countryside, while ffolliott will pretend she has been kidnapped to force Fisher to divulge Van Meer's location. However, when Haverstock and Carol reach the inn, they have an argument about the arrangements, and Carol returns to London. Just as Fisher is about to fall for ffolliott's bluff and reveal the whereabouts of Van Meer, he hears Carol's car pull up in the drive, and writes that on the piece of paper he hands to ffollitt, instead of the location.

In the meantime, England and France have declared war on Germany. Then, while the group are on a "Clipper" plane to America, Fisher confesses his deeds to his daughter. Despite this, Carol blames Haverstock for not really loving her and only wanting to pursue her father. He protests that he was just doing his job as a reporter but Carol refuses to listen. Seconds later, the plane is shelled by a German , and crashes in the middle of the ocean. The plane sinks and many trapped passengers drown, but survivors escape onto the floating wing of the downed plane. Realizing that it cannot support everyone, including his daughter, Stephen Fisher commits suicide by allowing himself to drown. Jones and ffolliott attempt to rescue him, but they are unsuccessful and are forced to return to the floating wing. Shortly after, they are rescued by an American .

On board the ship, Haverstock phones his editor in New York under the pretense that he is calling a relative. The Captain explains to Haverstock and ffolliot they are not allowed to report to their newspapers, but Haverstock puts the phone down with the line still open, and tells his story loudly and in great detail to the Captain, so that it can be overheard in New York and taken down to be published. Carol proves the veracity of the story by identifying herself as Fisher's daughter, identifying Fisher as the traitor, and letting the world know the truth.

In the film's finale, Haverstock is making a radio broadcast over radio, with Carol by his side. When a German bombing raid begins, everyone else runs to the shelters, but Haverstock and Carol stand alone in the darkened broadcasting room, getting their message out to the world: :Carol: They're listening in America.

:Haverstock: Okay, we'll tell 'em then. I can't read the rest of the speech I had, 'cause the lights have gone out, so I'll just have to speak from the cuff. All that noise you hear isn't static - it's death, and its coming to London. Yes, they're coming here now. You can hear the bombs falling on the streets and on the homes. Don't tune me out now, hang on a while - this is a big story, and you're part of it, it's too late to do anything here now except to stand in the dark and let them come... as if the lights were all out everywhere, except in America. But keep those lights burning, cover them with steel, ring them with guns, build a canopy of battleships and bombing planes around them. Hello, America, hang on to your lights: they're the only lights left in the world!

Cast notes:
*Albert Basserman, who plays Van Meer, was German and couldn't speak English, so he had to learn all his lines phonetically. Likewise, one "Dutch" girl speaks Dutch phonetically, though not quite as convincingly.

Producer bought the rights to Vincent Sheean's memoir "Personal History" in 1934, but after several adaptations proved unsatisfactory, Wanger allowed the story to stray significantly from the book.

Working titles for the film, which began production on 18 March fy|1940 and initially finished on 5 June, were "Personal History" and "Imposter". [TCM [http://www.tcm.com/tcmdb/title.jsp?stid=75400&category=Overview Overview] ] Shooting took place at the Goldwyn Studios in West Hollywood, and on location around and Long Beach. [IMDB [http://www.imdb.com/title/tt0032484/locations Filming locations] ]

After the film wrapped, Hitchcock visited his native England, and returned on 3 July to report that it was expected there that the Germans would begin bombing London at any time. To accommodate this, was called in to write the epilogue of the film, the scene in the radio station. This was filmed on 5 July.

One of the sequences in the film that continues to have a strong impact on viewers is the mid-ocean crash of the "Clipper" airplane after it is shot down by a German U-Boat. In 1972, in an interview with , Hitchcock discussed some details of how the scene was created. Footage taken from a stunt plane diving over the ocean was rear projected on rice paper in front of the cockpit set, while behind the rice paper were two chutes connected to large water tanks. The chutes were aimed at the windshield of the cockpit, so that water would break through the rice paper at the right moment, simulating the crash of the plane into the ocean.

"Foreign Correspondent" opened on 16 August fy|1940 in the United States and on 11 October of that year in the U.K.

The film did well at the box office, and was generally praised by the critics &ndash; although some saw it as a glorified B-movie. It also attracted attention from at least one professional propagandist: Nazi Propaganda Minister called "Foreign Correspondent":

A masterpiece of propaganda, a first-class production which no doubt will make a certain impression upon the broad masses of the people in enemy countries.

The film has a 96% "fresh" rating on . [rotten-tomatoes|foreign_correspondent|Foreign Correspondent]

*Alfred Hitchcock cameo: When Haverstock (Joel McCrea) first spots Van Meer on the street in London, Hitchcock walks past reading a newspaper.
*There is an unmistakable image of Adolf Hitler in the windmill scene. Right after Jones (McCrea) rescues his coat from the grinding gears, and escapes out the window, he peers back in at the spies. In the right hand corner of the scene, there is a cartoon like image of Adolf Hitler formed by a wood beam and unidentified markings. Hitchcock's subtle, almost subliminal reminder of who the bad guys really represent.
* When McCrea flees his hotel room and touches the letter 'E' of the neon 'HOTEL' sign, he burns himself and the letters 'E' and 'L' die, appropriately leaving the word 'HOT' and leaving the hotel's name as 'HOT EUROPE', underscoring the film's theme of war in Europe.
* Hitchcock's eccentric marriage proposal to his wife Alma was written for this film, for when Haverstock proposes to Carol.