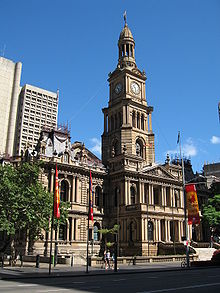 Offices of the City of Sydney council, a local government area within Sydney 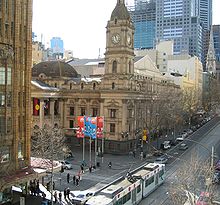 Offices of the Melbourne City Council in Melbourne

Local government in Australia is the third (and lowest) tier of government, administered by the states and territories which in turn are beneath the Commonwealth or federal tier. Unlike New Zealand, the US or the UK, there is only one level of local government in all states, with no distinction such as counties and cities. Today, most local governments have equivalent powers within a state, and styles such as "shire" or "city" refer to the nature of the settlements they are based around. There are currently about 700 local councils in Australia.[1]

The local governing body is generally referred to as a council (thus "Burwood Council" or "Casey City Council"), and the territories governed are collectively referred to as "local government areas"; however, terms such as "city" or "shire" also have a geographic interpretation.

Despite the single level of local government in Australia, there exist a number of (often quite extensive) areas with relatively low populations which are not a part of any local government area. Powers of local governments in these areas may be exercised by special purpose bodies established outside of the general legislation (as with Victoria's alpine resorts) or directly by state governments.

Local governments by type and state 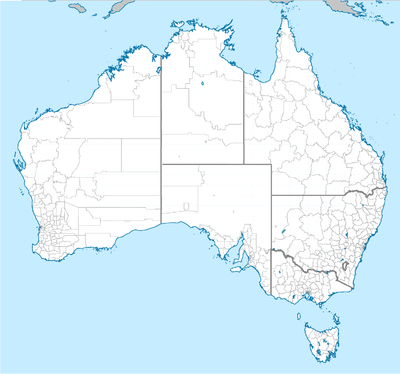 The first official Local Government in Australia was the Adelaide Corporation which was created by the province of South Australia in October 1840. The City of Melbourne followed in 1842.[2] All of these early forms failed; it was not until the 1860s and 1870s that the various colonies established widespread stable forms of local government, mainly for the purpose of raising money to build roads in rural and outer-urban regions. Significant reforms took place in the 1980s and 1990s in which state governments brought in notions of metrics and efficiency developed within the private sector to the local government arena; as a result, major amalgamation programmes in Victoria, South Australia and Tasmania took place, while minor regional initiatives were deployed in parts of Queensland and New South Wales. 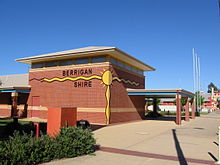 Although they are all essentially identical in function, Australian local governments have a variety of names. The term "local government area" is used to refer collectively to all local governments regardless of status, whilst the local governing body itself is generally known as a council. Today, the styles "borough", "city", "district", "municipality", "region", "shire", "town", "community government", "Aboriginal shire" and "Island" are used in addition to areas/councils without a specific style.

Sometimes words other than "City" or "Shire" will be used in the names of LGAs. The word "Municipality" occurs regularly: in New South Wales, it is typically used for older urban areas, but in rural Tasmania municipalities resemble standard shires, and the word is also used for several rural towns in South Australia. Some rural areas in South Australia are known as "District Councils", while larger rural towns and small metropolitan centres in Queensland and Western Australia simply use the term "Town". New South Wales and Queensland have introduced a new term, "Region", for LGAs formed by the amalgamation of smaller shires and rural cities. Historically, the word "Borough" was common for small towns and metropolitan areas in Victoria, but only the Borough of Queenscliffe remains. In New South Wales, where the Local Government Act in force does not require a designation, some local governments are legally known simply as "Councils", e.g. Port Macquarie-Hastings Council or Pittwater Council.

Almost all local councils have the same administrative functions and similar political structures, regardless of their naming, and retain a particular designation ("Shire", "Borough", "Town", "City") for historical reasons only. They will typically have an elected council and usually a mayor or shire president responsible for chairing meetings of the council. In some councils, the mayor is a directly elected figure, but in most cases the mayor is elected by their fellow councillors from among their own number. The powers of mayors vary as well. In some states such as Queensland, the mayors have broad executive functions, whereas in New South Wales mayors are essentially ceremonial figureheads who can only exercise power at the discretion of the council. 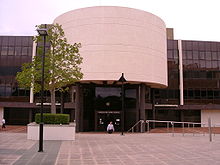 Offices of the Caboolture Shire Council in Caboolture, Queensland

All local governments are approximately equal in their theoretical powers, although LGAs that encompass large cities such as Brisbane and Gold Coast Cities command more resources due to their larger population base. Unlike local governments in many other countries, services such as police, fire protection and schools are provided by state or territory government rather than by local councils.

The councils' chief responsibilities are usually provision of community facilities such as libraries and parks, maintenance of local roads, town planning and development approvals, and local services such as waste disposal. These are financed by collection of local land taxes known as "rates," and grants from the state and Commonwealth governments. They are caricatured as being concerned only with the "three Rs": Rates, Roads and Rubbish. Their limited powers, small outlook and dependence on other bodies to continue operation means local government in Australia is often criticised as being petty, backward and even unnecessary.[citation needed]

Recent years have seen some State governments devolving additional powers onto LGAs. In Queensland LGAs have been granted the power to independently enact their own local legislation, in contrast to the previous system of by-laws. Councils also have organised their own representative structures such as Local Government Associations and Regional Organisations of Councils.