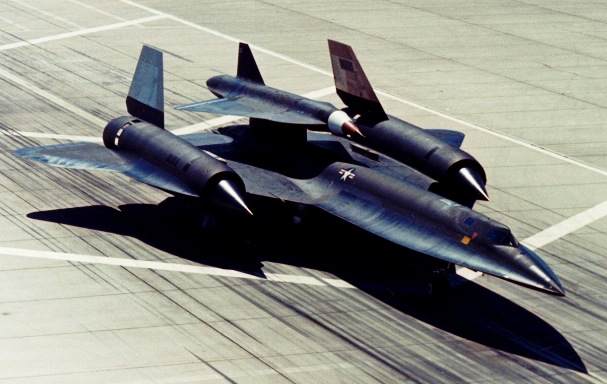 The D-21 was a Mach 3+ drone that began development in October 1962. Originally known by the Lockheed designation Q-12, it was intended to be launched off the back of the A-12 for extra-long or very dangerous missions. The A-12 variant developed to launch the D-21 drone was designated the M-21. The D-21 was designed to carry its single high-resolution photographic camera over a pre-programmed location, then drop the camera module into the ocean, where it could be retrieved.

In the early 1960s, Lockheed had developed the Mach-3 A-12 spyplane, which quickly evolved into the strategic reconnaissance aircraft. After the downing of ' U-2 in 1960, concepts for an A-12 drone were proposed. Kelly Johnson, in charge of Lockheed's secret Skunk Works that had built the A-12, thought the A-12 itself would be too big and complicated to make a useful drone, but felt that the design and technology could be used to build a smaller aircraft that could perform the same mission. The ideas congealed into a formal study for a high-speed, high-altitude drone in October 1962. The study was financed by a special fund. The Q-12 design was finalized in October 1963. Its double-delta wing was similar to the A-12's outer wing design. The Q-12 was to be air-launched from the back of an A-12, and used key technology from the A-12 project, including construction.

Kelly Johnson wanted to power the Q-12 with a engine built by for the BOMARC long-range . Marquardt's plant was close to Lockheed's, helping ensure security, and the two companies had already collaborated on several programs. Marquardt engineers indicated that the BOMARC ramjet could be used, though the engine, ultimately designated the RJ43-MA-11, needed some work, since it wasn't designed to burn for much longer than it took a BOMARC to hit a target a few hundred kilometers away. In contrast, the Q-12's engine was to operate for at least an hour and a half, much longer than any ramjet at that time. The engine also needed to be modified to burn the same fuel used by the mother plane.

A mockup of the Q-12 was ready by . Radar tests indicated that it had an extremely low . tests also indicated the design was on the right track. However, the was not enthusiastic about the Q-12, mostly because the agency was overextended at the time with U-2 missions, getting the A-12 up to speed, and covert operations in Southeast Asia. In contrast, the Air Force was interested in the Q-12 as both a reconnaissance platform and a cruise missile, and the CIA finally decided to work with the USAF to develop the new drone. Lockheed was awarded a contract in March 1963 for full-scale development of the Q-12.

The reconnaissance payload and guidance systems were carried in a "Q-bay" about 1.9 meters (six feet) long. These systems were built into a module that plugged neatly into the bay and was known as a "hatch". As per the original design concept, the hatch would be ejected at the end of the mission, and the aircraft would then blow itself up with a self-destruct charge. The hatch would be snagged out of the air by a Hercules, a technique that had been refined by the Air Force to recover film canisters from reconnaissance satellites.

In late 1963, the project was named Tagboard; the Q-12 was re-designated D-21 while the A-12 became M-21 (D- for "daughter" and M- for "mother"). Two production slots from the original 18 A-12 units were designated for the M-21, serial numbers 60-6940, and -6941. The M-21 was a two-seat version of the A-12, with a pylon on the fuselage centerline between the tailfins to carry the drone in a nose-up attitude. A periscope allowed the back-seater, or "Launch Control Operator (LCO)", to observe the D-21. Two M-21s were built, along with an initial batch of seven D-21s for test flights. The major initial problem was launch of the D-21 from the M-21 mother ship. There was an uncomfortably small clearance between the M-21's fins, and the potential for disaster during separation of the drone from the mother ship was obvious.

The M-21/D-21 combination began captive flight-testing on , continuing through 1965. covers that were in place over the intake and exhaust were removed after the first few tests, as it was unable to drop them at Mach 3 without damaging the M-21 and/or D-21. Increased drag caused by the removal was overcome by using the D-21's ramjet as a third engine, drawing fuel from the M-21's tanks until the drone was released.

The first launch of the D-21 from the back of the M-21 occurred successfully on , . The release was successful, though the drone hovered above the back of the M-21 for a few seconds, which seemed to one of the flight crew like "two hours". Kelly Johnson called it "the most dangerous maneuver we have ever been involved in, in any airplane I have ever worked on." The D-21 itself crashed after a flight of a few hundred kilometers. As a result, the CIA and the Air Force were still not very enthusiastic about the program. Kelly Johnson conferred with Air Force officials to see what he could do to tune the project more closely to the service's needs. Among other things, Johnson suggested launching the D-21 from a B-52 bomber and using a solid rocket booster to get the drone up to speed.

A second successful launch took place on , with the D-21 reaching its operational altitude of 90,000 feet (27,400 m) and speed of Mach 3.3, though it was lost due to a system failure after a flight of over 1,200 nmi (2,200 km). This was regarded as very satisfactory progress. The successful tests sharpened the interest of the program's government backers, and by the end of the month a contract for 15 more D-21s had been placed. A third successful flight took place on , with the D-21 flying through its complete mission, though the hatch wasn't released due to an electronics failure.

However, the fourth and final launch a month later on ended in disaster. The D-21 struck the M-21's tail immediately after separation, destroying both aircraft. The two crewmen ejected safely and landed at sea. The pilot, Bill Park, survived, but the LCO, Ray Torick, drowned when his pressure suit leaked. As a result, Kelly Johnson immediately ended launches from the M-21. However, he felt that the B-52 launch scheme was still practical, and the D-21 program remained alive and well.

The modified drone was designated D-21B (although there was no -21A version) and all D-21s on order in mid-1966 were completed as D-21Bs. Two B-52Hs were modified to carry two drones each and were given two large underwing pylons to carry the drones, replacing the smaller pylons used for the B-52's Hound Dog cruise missiles. Two independent LCO stations were added at the rear of the bomber's flight deck, along with command and telemetry systems; a stellar navigation system to ensure that the drones were launched from well-defined coordinates to reduce flight guidance error; and a temperature control system to keep the drones at a stable temperature before launch.The B-52Hs could communicate with the D-21Bs, which had improved remote control links that remained active up to 10 minutes into the mission.

The booster was a solid-fuel rocket with a length of 44 feet 4 inches (13.5 m) and a weight of 13,290 pounds (6.025 tonnes), making it longer and heavier than the drone itself. The booster had a single small tailfin on the bottom to ensure that it flew straight. The tailfin folded to ensure ground clearance. The booster had a burn time of about a minute and a half, and a thrust of 27,300 pounds (12,380 kilograms).

Initial testing began in September 1967 and went on until July 1969. The first attempted launch of a D-21B was on , but the drone accidentally fell off the B-52's pylon. Its booster fired but the D-21B went straight into the ground. Kelly Johnson called the incident "very embarrassing". Three more launches were performed from November 1967 through January 1968. None were completely successful, so Johnson ordered his team to conduct a thorough review before renewing launch attempts. The next launch was on , and was also a failure. The Lockheed engineers went back to the drawing board once more, and on they were rewarded with a completely successful flight. The D-21B flew a test mission at the specified altitude and course over its full range, and the hatch was recovered successfully, though it didn't have a camera payload.

The troubles were not over yet, however. The next two launches were failures, followed by another successful flight in December. A launch near Hawaii in February 1969 to simulate an actual operational flight was a failure as well, but the next two flights, in May and July, were both successes.

Four operational missions took place under the name "SENIOR BOWL", from , to , , all over the to spy on the nuclear test site. On the first mission, the Chinese never spotted the stealthy drone, but it disappeared and was not recovered. Once again, the Lockheed engineers went back to the drawing board. Another test flight was conducted on , and was successful. However, the second operational mission was not until . The D-21B made it all the way to Lop Nor and back to the recovery point, but though the hatch was dropped as planned, it did not deploy its parachute and was destroyed on impact.

The third operational flight, on , was even more frustrating. Once again, the D-21B traveled to Lop Nor and back, and properly discarded the hatch. The hatch deployed its parachute, but the midair recovery failed, and a destroyer that tried to retrieve the hatch from the sea ran it down. The hatch sank and was lost. The fourth, and last, flight of the D-21B was on . It was lost over China on the outbound leg, apparently having been shot down.

In July 1971, the D-21B program was cancelled, due to a combination of the poor level of success and the introduction of a new generation of photoreconnaissance , as well as President 's rapprochement with China.

When Ben Rich, Kelly Johnson's successor at the Skunk Works, visited Russia in the 1990s after the fall of the USSR, a contact gave him a package that contained parts of the D-21 that had disappeared on the first operational flight. It had crashed in Siberia. The Soviets had apparently been puzzled as to what it was, but it appears that they also obtained the wreckage of the D-21 lost on the fourth operational flight. The Tupolev design bureau reverse-engineered the wreck and came up with plans for a Soviet copy, named the "Voron (Raven)", but it was never built.

In the end, 38 D-21/D-21B drones were built with 21 expended. The other 17 were put in mothballs at the "boneyard" near and redesignated as GTD-21B. Since the base is open to the public, the exotic D-21s were eventually spotted and photographed, leading to speculation as to their nature, speculation that was inflamed by misinformation from the Air Force. For example, they were described as test machines used in development of the A-12 / SR-71.

The mothballed drones were passed off to , which took four. In the late 1990s, NASA considered using their D-21s to test a hybrid "rocket-based combined cycle (RBCC)" engine, which operates as a ramjet or rocket, depending on its flight regime. This idea was abandoned, with NASA preferring to use a derivative of the agency's X-43A hypersonic test vehicle for the experiments. Other D-21s have been released to museums for display.