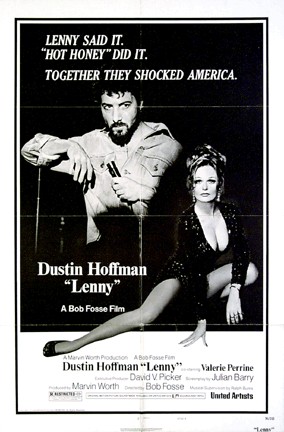 
"Lenny" is a 1974 film about the life of the comedian , starring . Directed by . The screenplay by is based on his play "Lenny".

The chronology hops, skips and jumps between Lenny Bruce in his prime and the burned-out, strung-out performer who, in the twilight of his life, used his nightclub act to pour out his personal frustrations to great, boring length. We watch as up-and-coming Bruce courts his "Shiksa goddess", a stripper named Honey. With family responsibilities, Lenny is encouraged to do a "safe" act, but he cannot do it. Constantly in trouble for flouting obscenity laws, Lenny develops a near-messianic complex which fuels both his comedy genius and his talent for self-destruction. Worn out by a lifetime of tilting at Establishment windmills, Lenny Bruce died in 1966.

*It was known that Hoffman would spend days listening and watching Bruce's routines and practice mimicking in front of a mirror to get the feel of the role.
*In his memoir "", said that he saw "Lenny" as the first date with his now ex-wife, Alison; he called this a good sign of things to come as he would later be compared to Bruce and recognize his influence. The film adaptation of "Private Parts" would feature similar interview transitions.