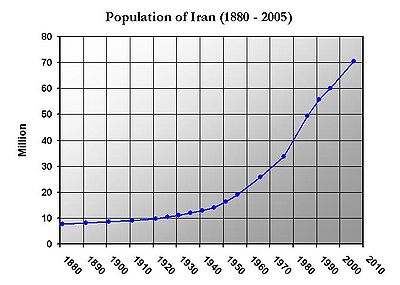 Changes in population of Iran

Iran's population increased dramatically during the later half of the 20th century, reaching about 75 million by 2011.[1] In recent years, however, Iran's birth rate has dropped significantly. Studies project that Iran's rate of population growth will continue to slow until it stabilizes above 100 million by 2050.[2][3] In 2008, the number of households stood at 15.3 million (4.8 person/household).[4] 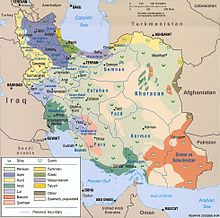 While nearly 100% of Iran's population is fluent in modern Persian, approximately 75-80% of Iran's peoples exclusively speak Iranian languages (the most common language known as Persian - or "Farsi" as it is known in the Persian language).[9] The major groups in this category include Persians, Kurds, Gilakis, Mazandaranis, Lurs, and Baluchis. Turkic speakers, such as the Azeri, Turkmen, and the Qashqai peoples, comprise a substantial minority. The remainder are primarily Semitics such as Arabs and Assyrians or other Indo-Europeans such as Armenians. There are also small communities of Brahui in southeastern Iran. The Georgian language is spoken only by those Iranian Georgians that live in Fereydan and Fereydunshahr. All other communities of Iranian Georgians in Iran have already lost their language.

CIA World Factbook, which is based on a pre-revolution (1979) statics gives us the following numbers: Persian, Luri, Gilaki and Mazandarani 66%, Azeri and other Turkic languages 18%, Kurdish 10%, Arabs 2%, Baloch 2%[10]

In addition to its international migration pattern, Iran also exhibits one of the steepest urban growth rates in the world according to the UN humanitarian information unit. According to 2005 population estimates, approximately 67 percent of Iran's population lives in urban areas, up from 27 percent in 1950.[13] The following is a list of the six most populous cities in the country. 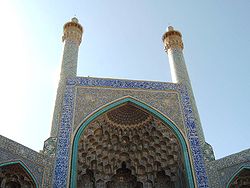 The entrance to Shah Mosque (aka Imam Mosque or Shah Jame' Mosque) in Isfahan. This mosque is a fantastic example of Persian architecture during the Safavid dynasty.

Most Iranians are Muslims; 90% belong to the Shi'a branch of Islam, the official state religion, and about 8% belong to the Sunni branch, which predominates in neighboring Muslim countries.[15] 2% Non-Muslim minorities include Zoroastrians, Jews, Bahá'ís, Mandeans, Christians and Yarsan. The Bahá'í Faith, Iran's largest religious minority with a population around 300 000, is not officially recognized, and has been persecuted during its existence in Iran. Since the 1979 revolution the persecution of Bahá'ís has increased with executions, the denial of civil rights and liberties, and the denial of access to higher education and employment.[16][17]

Non-Muslim minorities have been shrinking in the past few decades as they have been emigrating and leaving Iran.[citation needed] About 11,000 to 40,000 Jews remain in Iran today, still being the largest Jewish community in the Middle East outside Israel, but it stood at about 100,000 before the Islamic Revolution. Zoroastrian, and Christian communities are seeing similar contraction.[citation needed] Today, there are about 8,000 Assyrian Christians in Iran, who belong to the Chaldean Catholic Church.

Iranian women have played an important role throughout history. Scheherazade, though fictional, is an important figure of female wit and intelligence, while the beauty of Mumtaz Mahal inspired the building of the Taj Mahal itself.

Former Vice President Masoumeh Ebtekar, noted for her eloquence in dealing with western media, set a new standard for aspiring Iranian female politicians while serving under President Khatami. Outstanding Iranian female academics, such as Laleh Bakhtiar have forever left a mark in the fields they contribute to.

The term "Iranian citizens abroad" or "Iranian/Persian diaspora" refers to the Iranian people born in Iran and their children but living outside of Iran. Migrant Iranian workers abroad remitted less than two billion dollars home in 2006.[18]

As of 2010, there are about five million Iranians living abroad, mostly in the United States, Canada, Europe, Persian Gulf States, Turkey, Australia and the broader Middle East.[13][19][20] In particular, the Los Angeles area is estimated to be host to approximately 720,000 Iranians, earning the Westwood area of LA the nickname Tehrangeles.[21] Other metropolises that have large Iranian populations include Dubai with 300,000 Iranians, Vancouver, London, Toronto, San Francisco Bay Area, Washington D.C., Stockholm, Berlin, Hamburg and Frankfurt. Their combined net worth is estimated to be $1.3 trillion.[22]

Note that this differs from the other Iranian peoples living in other areas of Greater Iran, who are of related ethnolinguistical family, speaking languages belonging to the Iranian languages which is a branch of Indo-European languages.

The following demographic statistics are from the CIA World Factbook, unless otherwise indicated.[7]

Iran hosts one of the largest refugee population in the world, with more than one million refugees, mostly from Afghanistan (80%) and Iraq (10%). Since 2006, Iranian officials have been working with the UNHCR and Afghan officials for their repatriation.[23][24]

Between 1979 and 1997, UNHCR spent more than US$1 billion on Afghan refugees in Pakistan but only $150 million on those in Iran. In 1999, the Iranian government estimated the cost of maintaining its refugee population at US$10 million per day, compared with the US$18 million UNHCR allocated for all of its operations in Iran in 1999.[24]

It is estimated that some 200 million people around the world have Persian ancestry.[25]

The Parsis are the close-knit Zoroastrian community based primarily in India but also found in Pakistan. Parsis are descended from Persian Zoroastrians who emigrated to the Indian subcontinent over 1,000 years ago. Indian census data (2001) records 69,601 Parsis in India, with a concentration in and around the city of Mumbai (previously known as Bombay). There are approximately 8,000 Parsis elsewhere on the subcontinent, with an estimated 2,500 Parsis in the city of Karachi and approximately 50 Parsi families in Sri Lanka. The number of Parsis worldwide is estimated to be fewer than 100,000 (Eliade, 1991:254).

In Pakistan and India, the term "Irani" has come to denote Iranian Zoroastrians who have immigrated to Pakistan and India within the last two centuries, as opposed to most Parsis who arrived in India over 1000 years ago. Many of them immigrated during the Qajar era, when persecution of Iranian Zoroastrians was rampant. They are culturally and linguistically closer to the Zoroastrians of Iran. Unlike the Parsis, they speak a Dari dialect, the language spoken by the Iranian Zoroastrians in Yazd and Kerman. Their last names often resemble modern Iranian names, however Irani is a common surname among them. In India they are mostly located in modern-day Mumbai while in Pakistan they are mostly located in modern-day Karachi. In both Pakistan and India, they are famous for their restaurants and tea-houses. [2] Some, such as Ardeshir Irani, have also become very famous in cinema.

The "Ajam" are an ethnic community of Bahrain, of Iranian origin. They have traditionally been merchants living in specific quarters of Manama and Muharraq. The Iranians who adhere to both the Sunni or Shiite sect of Islam are Ajam, and they are different from the Huwala, who have Arab origins.

In addition to this, many names of ancient villages in Bahrain are of Persian origin. It is believed that these names were given during the Safavid rule of Bahrain (1501–1722). i.e. Karbabad, Salmabad, Karzakan, Duraz, Barbar, which indicates that the history of Ajams is much older.

Huwala are the descendants of Sunni Arabs, and the word is also mistakenly used to call Sunni Persians, who migrated from Iran to the Arabian peninsula. The Huwala are much different from the Sunni Persians who also have migrated from their original homeland "Iran" to Arabia, except that the two ethnicities share the same Islamic Sunni faith.

Y-Chromosome DNA Y-DNA represents the male lineage, The Iranian Y-chromosome pool may be summarized as follows where haplogroups R1, J2, G, I, and NOP* comprise generally more than 90% of the total chromosomes.[26]