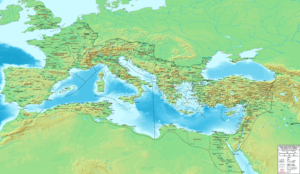 The provinces and dioceses of the Roman Empire after the death of Theodosius I in ca. 400AD 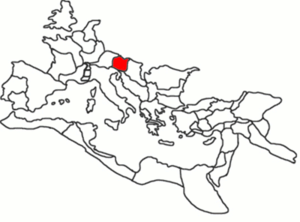 Noricum, in ancient geography, was a Celtic kingdom (perhaps better described as a federation of, by tradition, twelve tribes) stretching over the area of today's Austria and a part of Slovenia. It became a province of the Roman Empire. It was bounded on the north by the Danube, on the west by Raetia and Vindelicia, on the east and southeast by Pannonia, on the south by Region 10, Venetia et Histria.[1]

Noricum roughly corresponded to the greater part of modern Styria and Carinthia, Austria west of Vienna, Salzburg, a part of Bavaria, and a part of Slovenia. It may be thus seen as the beginning of Austrian history, and in 1919 there was the concrete idea aired by Heinrich Lammasch, who had been Imperial Austria's last prime minister, to give the young republic the name of "Norische Republik" or "Noric Republic",[2] because the ancient borders were similar to those of the new state which, at that time, did not wish to be considered the heir of the Habsburg monarchy but an independent, neutral and peaceful state.[3]

The original population appears to have consisted of Pannonians (a people kin to the Illyrians), who, after the great migration of the Gauls, became subordinate to various Celto-Ligurians tribes, chief amongst them being the Taurisci, who were probably identical with the Norici of Roman sources, so called after their capital Noreia, whose location is, as yet, unknown.

The country is mountainous and the soil relatively poor except in the southeastern parts, but it proved rich in iron and supplied material for the manufacturing of arms in Pannonia, Moesia and northern Italy. The famous Noric steel was largely used in the making of Roman weapons ("Noricus ensis," Horace, Odes, i. 16. o). Gold and salt were found in considerable quantities. From a statement of Polybius we learn that in his own time in consequence of the great output of gold from a mine in Noricum gold went down one-third in value.[4] The plant called saliunca (the wild or Celtic nard, a relative of the lavender) grew in abundance and was used as a perfume according to Pliny the Elder.[5]

The inhabitants were a warlike people, who paid more attention to cattle-breeding than to agriculture, although it is probable that when the area became a Roman province the Romans increased the fertility of the soil by draining the marshes and cutting down timber. Noric steel was famous for its quality and hardness.

When the Celts had superseded the Illyrians, Noricum was the southern outpost of the northern Celtic peoples and, during the later period of the Iron Age, the starting point of their attacks upon Italy. It is in Noricum that we first learn of almost all those Celtic invaders. Archaeological research, particularly in the cemeteries of Hallstatt, has shown that there was a vigorous civilization in the area centuries before recorded history, but the Hallstatt civilization was a cultural manifestation prior to the Celtic invasions and close to the earlier Illyrians. The Hallstatt graves contained weapons and ornaments from the Bronze age, through the period of transition, up to the "Hallstatt culture", i.e., the fully developed older period of the Iron age. William Ridgeway made a strong case for the theory that the cradle of the Homeric Achaeans was in Noricum and neighbouring areas.[6][7]

The Noric language, a supposedly continental Celtic language, is attested in only two fragmentary inscriptions, which do not provide enough information for any conclusions about the nature of the language.

Noricum was incorporated into the Roman Empire in 16 BC. For a long time the Noricans had enjoyed independence under princes of their own and carried on commerce with the Romans. In 48 BC they took the side of Julius Caesar in the civil war against Pompey. In 16 BC, having joined with the Pannonians in invading Histria, they were defeated by Publius Silius, proconsul of Illyricum. Thereafter, Noricum was called a province, although it was not organized as such and remained a kingdom with the title of regnum Noricum, yet under the control of an imperial procurator. Under the reign of Emperor Claudius (41–54) the Noricum Kingdom was ultimately incorporated into the Roman Empire apparently without offering resistance. It was not until the reign of Antoninus Pius that the Second Legion, Pia (later renamed Italica) was stationed in Noricum, and the commander of the legion became the governor of the province.

Under Diocletian (245–313), Noricum was divided into Noricum ripense ("Noricum along the river", the northern part southward from the Danube), and Noricum mediterraneum ("landlocked Noricum", the southern, more mountainous district). The dividing line ran along the central part of the eastern Alps. Each division was under a praeses, and both belonged to the diocese of Illyria in the Praetorian prefecture of Italy. It was in this time that a Christian serving as a military officer in the province suffered martyrdom for the sake of his faith, later canonised as Saint Florian.

The Roman colonies and chief towns were Virunum (near Maria Saal to the north of Klagenfurt), Teurnia (near Spittal an der Drau), Flavia Solva (near Leibnitz), Celeia (Celje) in today's Slovenia, Juvavum (Salzburg), Ovilava (Wels), Lauriacum (Lorch at the mouth of the Enns, the ancient Anisus).

Our knowledge of Roman Noricum has been decisively expanded by the work of Richard Knabl, an Austrian epigrapher of the 19th century.