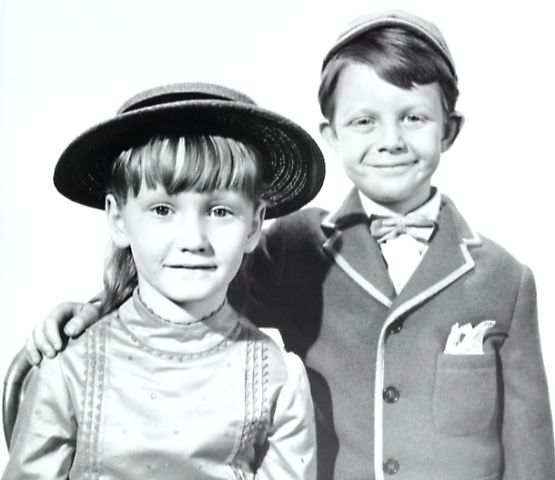 Karen Dotrice (born 9 November 1955) is a British actress known primarily for her role as Jane Banks in Walt Disney's feature film adaptation of the "" book series. Dotrice (pronEng|dəˈtriːs) was born in (one of the ) to two accomplished stage actors. Her career began on stage, expanded into film and television roles, and concluded with a short run as Desdemona in the 1981 pre-Broadway production of "". In 1984, Dotrice retired from show business to focus on motherhood; she has three children from two marriages. She was named a Disney Legend in 2004.

Born into a theatre family, Dotrice is the daughter of Roy and , two Shakespearean actors who met and married while performing in theatre productions in .

Dotrice was a toddler when her father joined the Shakespeare Memorial Theatre (later the ) in 1957. By age four, she was ready to perform, making her début in an RSC production of "The Caucasian Chalk Circle" by . There, a Disney scout saw Dotrice and brought her to Burbank, , , to meet .

At age eight, Dotrice was hired in 1964 to appear in "" as a girl whose relationship with her father is mended by the magical reappearance of her cat. While Dotrice was in California, her father stayed in England&mdash;where he was portraying ""&mdash;and Walt Disney personally took care of her family, often hosting them in his Palm Springs home. Dotrice took quickly to Disney as a father figure, calling him "Uncle Walt". She said the admiration was mutual: "I think he really liked English kids. He was tickled pink by the accent and the etiquette. And when I was being very English and polite, he would look proudly at this little charge who had such good manners."

Film historian said Dotrice "won over everyone" with her performance in "The Three Lives of Thomasina", and she was signed to play Jane Banks (along with "Thomasina" co-star as her brother, Michael) in "Mary Poppins". Disney's part-live-action, part- musical adaptation of the "Poppins" children's books by starred as a father and as a mother who are too busy to spend any time with their children. Instead, they hire a nanny () who takes Jane and Michael on magical adventures designed to teach them&mdash;and their parents&mdash;about the importance of family. "Poppins" was Disney's biggest commercial success at the time

Dotrice and Garber paired up again in "" (1967) as the grandchildren of a rich lumber mogul who stumble across a gnome forest and help keep the gnomes from dying off. Starring in a dual role, "The Gnome-Mobile" failed to perform on a par with "Poppins" at the box office,

After "The Gnome-Mobile", "the kids" no longer kept in contact with each other. In an interview for the 40th Anniversary Edition DVD release of "Mary Poppins", Dotrice recalled how she learned of Garber's death (in 1977): "I remember his mum, Margot, calling ... to let us know that Matthew had died. That was&mdash; so unexpected. ... I wished I had picked up the phone over the years, I wished I had treated him more like a brother; but he's indelibly printed in all of our minds, he's eternal ... an amazing little soul."

Dotrice later appeared as Alex Mackenzie in "The Thirty-Nine Steps" (1978) with and . The third film based on the novel, this was her only feature film as an adult. According to "All Movie Guide", Dotrice played "an imperiled heroine [who] was an invention of the Hitchcock version; the Buchan story is essentially 'boys only'."

Dotrice appeared as Desirée Clary in the "Napoleon and Love". The nine-hour, dramatised account of the many loves of starred and .

In 1975, she played housemaid Lily Hawkins in six episodes of "" during its fifth and final season. The series&mdash;a narrative of the upper-class Bellamy family and their servants in the early twentieth century&mdash;was one of the most popular programmes produced by for . It also proved popular when shown in the United States on "", and was "beloved throughout much of the world."

Dotrice took on the role of Maria Beadnell in the miniseries "Dickens of London" (1976), starring her father as . In 1977, she appeared with in "Joseph Andrews", a German telefilm based on the novel.

In 1978, Dotrice made her final screen appearance, playing Jenny in the BBC2 Play of the Week, "She Fell Among Thieves". Starring and , "Thieves" made its U.S. début on 5 February 1980&mdash;the first film screened as part of the PBS "" series.

In 1981, Dotrice took the role of Desdemona in the Warner Theatre production of "" opposite and . Reviewers were less than kind; calling her "the only serious let-down" in the cast, David Richards of "" wrote, "Dotrice is not Desdemona. She is a Desdemona doll, reciting her lines in a thin, reedy voice and moving through the tragedy with a rare somnolence." took the role in the 1982 Broadway production and received similar reviews.

Dotrice virtually disappeared from public life following her retirement. She was married to English actor from 1986 to 1992; they have a son, Garrick. In 1994, Dotrice married then- executive Edwin "Ned" Nalle and later gave birth to two children, Isabella and Griffin.

She provided spoken-word adaptations of Disney's "The Little Mermaid", "Beauty and the Beast" and "Pocahontas"; in 2001, she lent her voice to a sing-along release of "Mary Poppins" and was interviewed for the ABC television special, "Walt: The Man Behind the Myth"; she was, however, done with acting. "I'll never go back," she told "" magazine in 1995, "because you don't have to put on any make-up."

Dotrice was coaxed back into the spotlight twice in 2004: She was named a Disney Legend at a ceremony in Burbank (at which Matthew Garber was honoured posthumously),