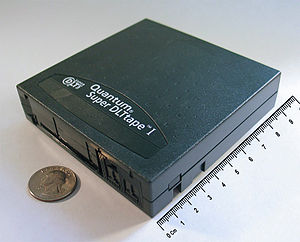 A Super DLT I tape cartridge

Digital Linear Tape (DLT) (previously called CompacTape) is a magnetic tape data storage technology developed by Digital Equipment Corporation (DEC) from 1984 onwards. In 1994 the technology was purchased by Quantum Corporation, who currently manufactures drives and licenses the technology and trademark. A variant with higher capacity is called Super DLT (SDLT). The lower cost "value line" was initially manufactured by Benchmark Storage Innovations under license from Quantum. Quantum acquired Benchmark in 2002.

DEC launched the TK50 tape drive for the MicroVAX II and PDP-11 minicomputers in 1984. This used 22-track CompacTape I cartridges, storing 94 MB per cartridge. The TK50 was superseded in 1987 by the TK70 drive and the 48-track CompacTape II cartridge, capable of storing 294 MB. In 1989, the CompacTape III (later DLTtape III) format was introduced, increasing the number of tracks to 128 and capacity to 2.6 GB. Later drives improved the data density of the DLTtape III cartridge into the early 1990s, up to 10 GB. The DLTtape IV cartridge was introduced by Quantum in 1994, with increased tape length and data density, initially offering 20 GB per tape. Super DLTtape, originally capable of up to 110 GB, was launched in 2001.

DLT uses linear serpentine recording with multiple tracks on half-inch (12.7 mm) wide tape. The cartridges contain a single reel and the tape is pulled out of the cartridge by means of a leader tape attached to the takeup reel inside the drive. The drive leader tape is buckled to the cartridge leader during the load process. Tape speed and tension are controlled electronically via the reel motors; there is no capstan. The tape is guided by 4 to 6 rollers that touch only the back side of the tape. Tape material is metal particle tape (MP/AMP.)

SDLT adds an optical servo system that reads servo patterns on the back of the tape, in order to keep the data tracks on the front of the tape correctly aligned with the read/write heads. This is important for newer tape media, which have very thin, dense data tracks; 256, 384 and 768 data tracks on a 1⁄2-inch-wide (13 mm) tape are now common.

DLT7000 and 8000 tilt the head forward and backward to reduce crosstalk between adjacent tracks through azimuth; this is called Symmetric Phase Recording.

All (S)DLT drives support hardware data compression. The often-used compression factor of 2:1 is optimistic and generally only achievable for text data; a more realistic factor across a file system is 1.3:1 to 1.5:1. Note that drive compression applied to pre-compressed data can actually make the written data larger than having compression turned off in the tape drive.

Media are guaranteed for 30 years of data retention under specified environmental conditions; however, they are easily damaged by mishandling (dropping or improper packaging during shipment.)

Current manufacturers of cartridges for the DLT/SDLT market are Fujifilm, Hitachi/Maxell and Imation. VStape is made by Sony. All other companies/brands (even Quantum) are contractors and/or resellers of these companies.

In February 2007, Quantum stopped developing the next generations of DLT drives (S5 and V5) after insufficient market acceptance of the S4 and V4 drives, shifting its drive strategy to LTO.

Tapes written in value series drives can typically be read (and often written to) in higher end drives of a similar vintage. The drive's technical specifications should contain interoperability options.