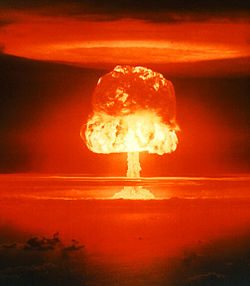 World War III (WWIII or Third World War) denotes a successor to World War II (1939–1945) that would be on a global scale, with common speculation that it would be likely nuclear and devastating in nature.

In the wake of World War I, World War II, the commencement of the Cold War and the development, testing and use of nuclear weapons, there was early widespread speculation as to the next global war. This war was anticipated and planned for by military and civil authorities, and explored in fiction in many countries. Concepts ranged from limited use of atomic weapons, to destruction of the planet.

Some such as Norman Podhoretz in his World War IV: The Long Struggle Against Islamofascism and historians have suggested that the Cold War can be identified as World War III because it was fought, although by proxy, on a global scale, with the main combatants, the United States and later NATO, and the Soviet Union and Warsaw Pact countries providing political, military and economic support while not engaging in direct combat. Eliot Cohen, the director of strategic studies at the Paul H. Nitze School of Advanced International Studies at Johns Hopkins University, declared in the Wall Street Journal, a little more than a month after the attacks on the twin towers and the Pentagon, that the struggle against terrorism was more than a law-enforcement operation, and would require military conflict beyond the invasion of Afghanistan. Cohen, like Marenches, considered World War III to be history. "A less palatable but more accurate name is World War IV," he wrote. "The Cold War was World War III, which reminds us that not all global conflicts entail the movement of multi-million-man armies, or conventional front lines on a map." [1] In a 2006 interview, US President George W. Bush labeled the ongoing War on Terror as "World War III" also.[2]

On the July 10 edition of Fox News' The Big Story, host John Gibson interviewed Michael Ledeen, resident scholar at the American Enterprise Institute (AEI), and said "some are calling the global war on terror something else, something more like World War III." But Ledeen responded that "it's more like World War IV because there was a Cold War, which was certainly a world war." Ledeen added that "probably the start of it [World War IV] was the Iranian revolution of 1979." Similarly, on the May 24 edition of CNBC's Kudlow and Company, host Lawrence Kudlow, discussing a book by former deputy Under-secretary of Defense Jed Babbin, said "World War IV is the terror war, and war with China would be World War V."[3]

Before the end of the Second World War, British Prime Minister Winston Churchill was concerned that given the enormous size of Soviet forces deployed in Europe at the end of the war, and the perception that the Soviet leader Joseph Stalin was unreliable, there existed a Soviet threat to Western Europe. In April-May 1945, British Armed Forces developed the Operation Unthinkable, the Third World War plan; its primary goal was "to impose upon Russia the will of the United States and the British Empire."[4] The plan was rejected by the British Chiefs of Staff Committee as militarily unfeasible.

With the development of the arms race, before the collapse of the Soviet Union and end of the Cold War, an apocalyptic war between the United States and the Soviet Union was considered possible. The Cuban Missile Crisis in 1962 is generally thought to be the historical point at which the risk of World War III was closest. The Doomsday Clock, which has served as a symbol of historic World War III close calls since the Truman Doctrine went into effect in 1947, has also indicated historic World War III close calls. Other potential triggers have included the following:

Difficulty in determining a "World War"

The English term "World War" has only seen widespread use during one conflict — World War I. A German biologist and philosopher Ernst Haeckel wrote this shortly after the start of the war:

This is the first known instance of the term First World War, which previously had been dated to 1931 for the earliest usage. The term was used again near the end of the war. English journalist Charles A. Repington (1858–1925) wrote:

This ignored such examples as the Seven Years' War although this was also a war fought by a collection of coalition over the whole world.

It may take years before another major conflict could be arguably recognized as a World War III. It should also be noted that serious wars before and after the first two world wars, even those closely associated with them, are not now treated as part of the larger conflict. These include the Balkan Wars from 1912 to 1913 and the Polish-Soviet War from 1919 to 1921, the Japanese invasion of Manchuria and later China and the Spanish Civil War. Therefore, the specific event where a future World War III begins may only be determined retrospectively.

World War III is also a common theme in popular culture. Who might start World War III and how it might start are perennial topics of discussion in press. A vast apocalyptic and post-apocalyptic science fiction literature exists describing the postulated execution and aftermath of World War III, several notable movies have been made based on World War III, and it is the topic of various comics, video games, songs, magazines, radio programs, newspapers and billboards.