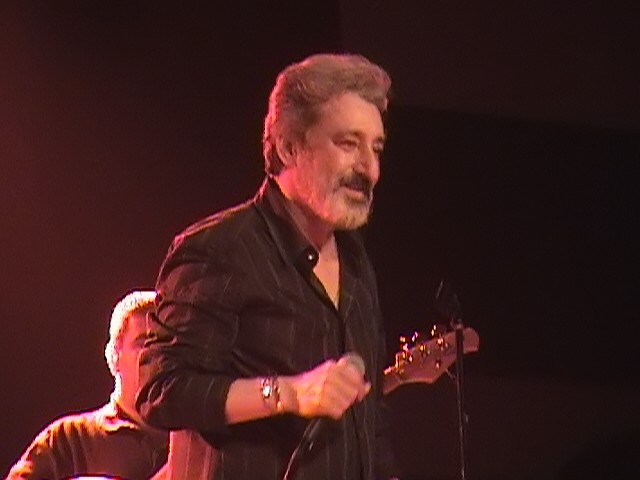 Ebrahim Hamedi (born June 19, 1949) better known by the name Ebi is a famous Iranian singer. Being one of the most popular and enduring singers of , he's usually noted for his unique voice and is considered by many to be the best Iranian Pop singer. Having started his career over 30 years ago, he is a well established star with fans all over the world. His voice, and his choice of songs has won him awards all around the world, such as "Master of Voice" in 1993 with the song "Persian Gulf" in Australia.

Ebi was born in , . He was the oldest child of his family and has four sisters and one brother. He started his career as a young teenager with a band called the "Sun Boys." Together they made many public appearances with relative success. After a few years he started his solo career with a song called "Attash" for a movie with the same title. He started his own style and from the beginning he showed that he is a talented singer and a star the newly developed Iranian Pop music can depend on. His third song, "Shab" (Night) is the song Ebi himself agrees made him a star. The song's lyrics were written by Ardalan Sarfaraz, one of the Iran's most famous songwriters. The song was first heard by people on 's show, Mikhake Noghreyi. The popularity of Fereydon Farokhzad's show immediately made Ebi very popular for the Iranian people. Ebi was further trained and nurtured by Ms. Mary Yeghyazarian who at the time (mid '70s) was in charge of new talent discovery and development at the Ministry of Art & Culture. Soon he became one of Mary's favorite students because of his talent and coachability.

As he became more famous, he met Shahram and Shahbal Shabpareh. The brothers were pioneers in Persian pop music. Ebi and a few members (Guitar player Amir and Keyboardist Jamhoor Esfahani, father of harpsichordist ) from the previous group, Sun Boys joined the Black Cats who were already performing in Kochini club. Kochini club was one of the most famous night clubs in Tehran before 1979. Although the group's success was great, Ebi left the group to start his solo career again.

After leaving Black Cats, Ebi released four albums. "Tapesh", "Nazi Naz Kon",Atal matal (with ), "Shab Zade" and "Gole Yakh" became number one hits and made him a real "superstar". His songs became soundtracks of many movies. Ebi won many prizes in singing competitions around the world.

After the Islamic Revolution

Ebi left Iran in 1977 (two years before the Iranian Islamic Revolution which took place in 1979), for a series of concerts in USA. Due to the revolution he made his stay in the States, permanent. He continued his career in Los Angeles with nearly no support but still managed to release many successful albums. Ebi sang many songs related to Iran, many of them with political messages. One of these songs was the famous controversial song, "Khalije Fars" (Persian Gulf) and Beshkan (literally meaning break this was possibly a message towards the revolution). During a concert in Dubai he once refused to sing the popular 'Persian Gulf', despite requests from his audience. Ebi was being sensitive to his Arab hosts and did not want to jeopardize his contract with them. Since then, many Iranians boycotted his concerts and he lost popularity amongst some Iranians for a short period of time. In an attempt to water down the accusations mounted against him, Ebi sings "Persian Gulf" in nearly all of his concerts to show his support for Iran and the Iranians. He occasionlly Sings Beshkan at select concerts only. Ebi's success in the past has sold out international arenas such as: , , Greek Theatre, , , ...

Ebi continues to release successful albums. His latest Album, Hasrateh Parvaz, was another success on his career report card. He has performed at his sold-out concerts for over than three decades. Apparently Ebi has begun his retirement focusing on his family life with a few occasions where he performs around the world. At these performances recently, he is collaborating with new Persian artists as a means for their introduction into the Persian community. Arash as well as are examples of artists Ebi has already introduced.

Ebi was a resident of Los Angeles for many years and continues to spend time there due to his career. However, due to personal preference, he now resides in Spain with his wife and travels throughout various other European countries. He has three daughters, Khatoon, Saye and Asal from his first marriage. They are 30, 28 and 26 years old respectively. He married two times and his second wife name is Mahshid. He also has one son, Farshid.