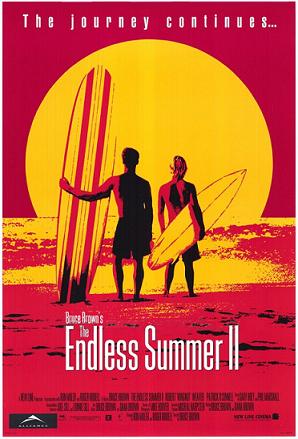 "The Endless Summer II" is a 1994 film directed by and is a sequel to his 1966 film "". In "The Endless Summer II", surfers and retrace the steps of and . It shows the growth and evolution of the surfing scene since the first film, which presented only classic longboard surfing. O'Connell rides a shortboard, which was developed in the time between the two movies, and there are scenes of windsurfing and . The film illustrates how far surfing had spread, with footage of surf sessions in , , , , Java, and even .

In , , Bruce's son, made what is seen as the "third movie", "". It follows the evolution of surfing over the last 10-15 years from shortboarding to .