Clavering is a village and also a parish in north-west Essex in England. The name 'Clavering' means 'place where clover grows'.[1] 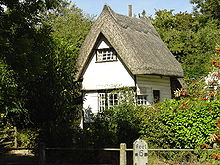 Clavering is situated 20 miles (32 km) south of Cambridge on the River Stort, close to the border with Hertfordshire. It is one of over 100 villages in the district of Uttlesford. Local towns are Saffron Walden, which is just over six miles north-east of the village, and Bishop's Stortford, eight miles to the south. The closest railway stations are Newport (Essex) railway station and Audley End railway station. Clavering is located 10 miles from London Stansted Airport.

The village has a large playing field, called Jubilee Field, with bowls and tennis facilities and children's play area. Adjoining Simon's Wood provides access to many countryside walks. The area has several accessible fishing lakes, which attract keen anglers. These include Clavering Lakes - a series of five purpose-built lakes created in 1991.[3] Clavering has a primary school and large village shop with post office on Stortford Road, and there is a long-established garden centre/nursery on Hill Green called FW Whyman.

Village clubs and societies include Clavering Players, an amateur drama company that began life in 1945 as Cheerio's Concert Party.[4] Clavering Cricket Club plays on Hill Green and has done so since the turn of the 20th century. The pavilion was built in 1950 and features seating from Lord's, the home of English cricket.

Chef and TV presenter Jamie Oliver comes from and lives in Clavering. His father Trevor runs one of the two village pubs, The Cricketers.[5] The Fox and Hounds[6] is located at the other end of the village opposite the River Stort. Both the Fox and The Cricketers attract people from nearby villages such as Arkesden, Wicken Bonhunt and Langley Upper Green as well as Clavering residents.

Notable sites in Clavering include Clavering Castle and the former Clavering guildhall - now known as The Bury. The remains of the castle are now just ringworks and earthworks. The castle is believed to date from pre-Norman times. The former guildhall is a medieval Grade II* listed building.[7] The building, which was constructed in the early 14th century, was restored following a fire in December 1991.

The parish church of St Mary & St Clement is largely 15th century, but contains some features from a pre-medieval church that stood on the site. Notable objects include the carved Elizabethan pulpit and beautiful stained glass.[8] There is a memorial in the church to Mary Wales, whose brother Charles Green and husband William Wales sailed on Captain James Cook's first and second voyages.[9]

Two other church buildings stand in Clavering. There is a brick built Primitive Methodist chapel (now a private home), dating from 1877-8 on Hill Green.[10] Clavering Christian Centre, now (an ecumenical church/community centre, is on Stortford Road in a building that originally housed a Congregational church.[11]

Two notorious murder cases are part of the village's history. The Moat Farm Murder in 1903[12] attracted scores of sightseers after the body of Camille Holland was dug up in the grounds of Moat Farm. Some 50 years earlier Sarah Chesham (known locally as 'Sally Arsenic')[13] was hanged for the murder of her husband. Previously she had been tried and acquitted for the murder of her two sons. This case influenced a change in the law on selling arsenic - requiring vendors to make a note of the purchaser's name, address and reason for needing poison.