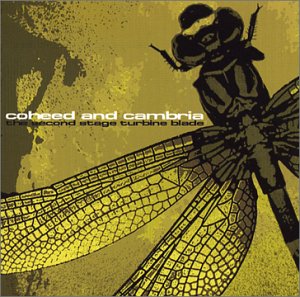 
"The Second Stage Turbine Blade" is the first studio album released by band . It was originally released on , through . It is the "second" part of a projected four-part tetralogy, telling the story of . It was re-released on (also through ) with three previously unreleased bonus tracks.

The album introduces us to Coheed and his wife Cambria. Coheed is infected with a serum that will grant him the power to destroy the universe if activated.

Sanchez's website, www.evilinkcomics.net, sums up the story of this part:

Man and wife Coheed and Cambria are used as the centerpiece to enable Supreme Tri-Mage Wilhelm Ryan's attempt at destroying his archrival Mage, Mariah Antillarea. Due to a memory swiping years ago, the couple are led to believe that their former lives have now come back to haunt them. They’re told by General Mayo Deftinwolf (Ryan's Right hand) that they were long ago implanted with a great threat to Heaven’s Fence, The Monstar Virus. A virus with the ability to turn its host (Coheed) into a being powerful enough to drain the Keywork's energy sources to spark Armageddon, while their dear old counterpart, Inferno was given the only means to unlock it. Through more lies, they are led to believe their children have genetically acquired a mutated form of the virus, the Sinstar. This new strain only requires its host to mature to a certain age, and has no antidote unlike the Monstar. Their children cannot be saved and time will not side with them. Coheed and Cambria are faced with an unimaginable dilemma: to murder their own children or face Armageddon.

"The Second Stage Turbine Blade" was re-released by on th, 2005, with three bonus tracks.

*The brief sound clip at the beginning of Junesong Provision (Acoustic Demo) (re-release only) is a famous line from cult classic film "", in which refers to his shotgun as his "boomstick."
*The short piano interlude at the end of the tracks "Everything Evil" and "God Send Conspirator" is later used in "The Ring in Return" and "The Light & The Glass" from the album , and "Keeping the Blade" on . The interlude is regarded by fans to indicate a passing of time in the story of the Amory Wars.
*The hidden track "IRO-Bot" is placed at the end of the demo version of "Everything Evil" on the 2005 re-release, instead of the end of "God Send Conspirator". The end of "21:13" found on "In Keeping Secrets of Silent Earth: 3" is a of this song. "21:13" also reprises the opening riff of "Time Consumer".