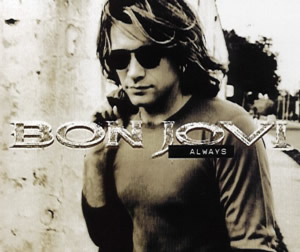 "Always" is a by New Jersey band . It was released as a single off their 1994 album, , and went on to become their biggest selling single, with 1.5 million copies sold in the US and more than 4 million copies sold worldwide. The song reached #4 in the US charts and was also an international hit (#2 in the UK, #4 in Germany, #1 in Switzerland).

The song was originally written for the soundtrack to the film "", but after seeing (and disliking) the movie, the band decided not to lend the song to the producers. Jon left the track on his shelf and forgot about it, until a friend found the track and convinced him to release it on the band's "Cross Road" album. The music video featured aspiring actress , and actor along with and .

"Always" is a love ballad about a man who is deeply in love with a woman who left him. Speaking about the song in concert in 2004, said, "So many people have taken this song and really felt like 'awww it's so romantic, it's so wonderful', but truthfully, this guy's practically a stalker, he's a sick human being.... so I'm glad that you guys see the glass as half full". [ This Left Feels Right DVD, 2003] Listen|filename=Bon Jovi- Always.ogg|title=Always|description=30 second sample of Always by Bon Jovi|format=

The song's powerful lyrics and power ballad-sound made "Always" an instant hit at live concerts, but the high demand on 's vocals have seen it rarely performed in concert following the band's 1995/1996 These Days tour. During the 2005/2006 it was occasionally performed in the acoustic style heard on the band's 2003 album. The song is featured on the band's Live From London Video/DVD. Recently the band has performed the original version on their , particuarly in the UK leg.