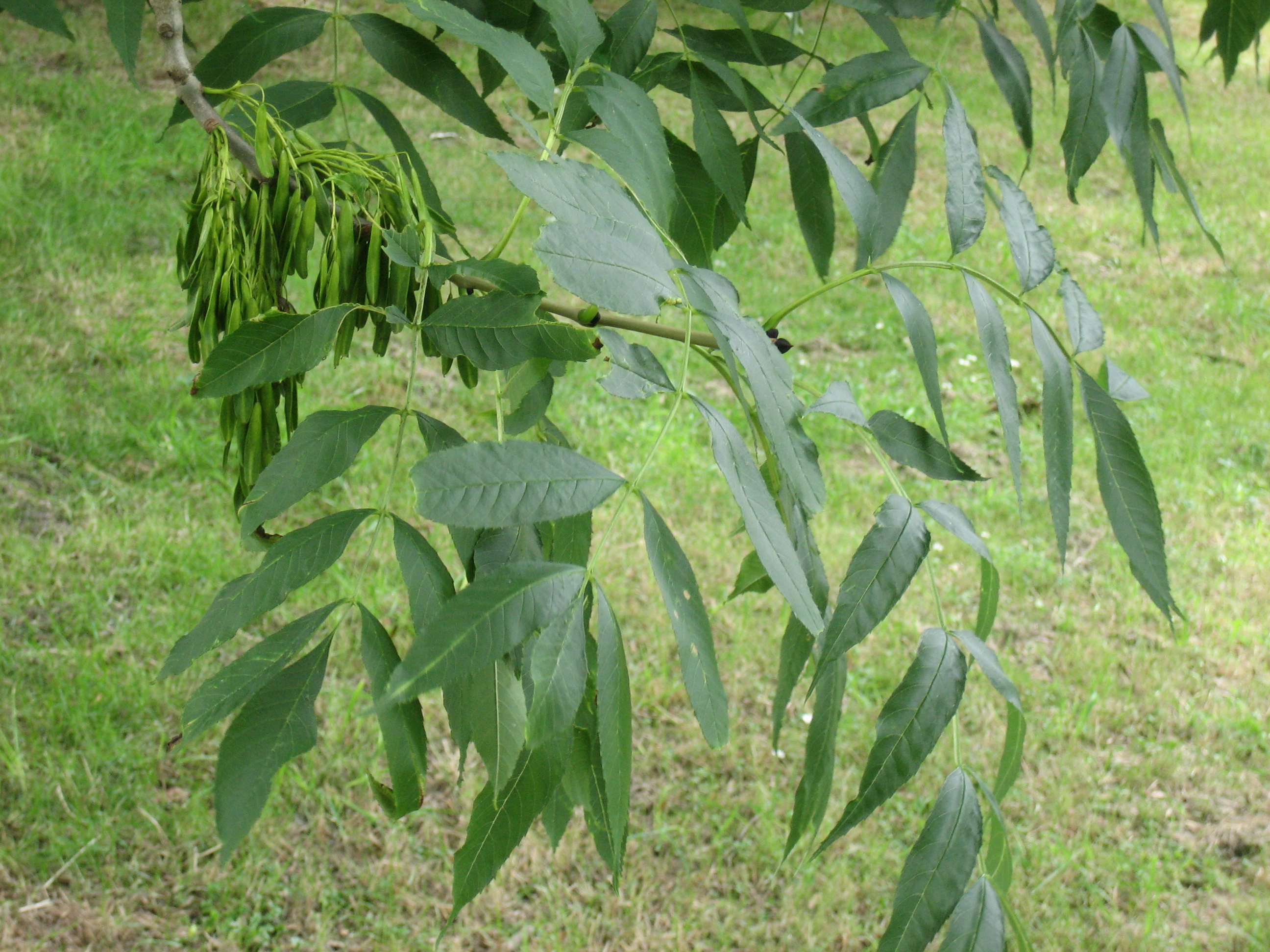 An ash can be any of four different tree genera from four very distinct families; most commonly in a combined form (e.g., "mountain ash"; see end of page for disambiguation), but originally and most commonly refers to trees of the genus "Fraxinus" (from "ash tree") in the family . The ashes are usually medium to large s, mostly though a few subtropical species are . The leaves are opposite (rarely in whorls of three), and mostly pinnately-compound, simple in a few . The s, popularly known as "keys" or "helicopter seeds", are a type of known as a samara. The genus "Fraxinus" contains 45-65 species. The tree's common English name goes back to the Old English "æsc", a word also routinely used in Old English documents to refer to spears made of ash wood.

The "Agrilus planipennis", a wood-boring accidentally introduced to North America from eastern Asia with ash wood products circa , has killed millions of trees in the Midwestern US and adjacent , and some isolated smaller areas on eastern North America. It threatens some 7 billion ash trees in North America. The public is being cautioned not to transport unfinished wood products, such as firewood, to slow the spread of this insect pest.

The is hard (a ), tough and very strong but elastic, extensively used for making bows, handles, quality wooden s, hurleys and other uses demanding high strength and resilience.

It is also often used as material for electric guitar bodies and, less commonly, for acoustic guitar bodies, known for its bright, cutting tone and sustaining quality. They are also used for making drums shells.

Ash veneers are extensively used in office furniture. It also makes excellent firewood. The two most economically important species for wood production are White Ash in eastern North America, and European Ash in Europe. The Green Ash is widely planted as a street tree in the United States. The inner bark of the Blue Ash has been used as a source for a blue .The cortex (bark) of "Fraxinus rhynchophylla" HANCE (zh-stp|s=苦枥白蜡树|t=苦櫪白蠟樹|p=kǔlì báilàshù), "Fraxinus chinensis" ROXB. (zh-stp|s=白蜡树|t=白蠟樹|p=Báilàshù), "Fraxinus szaboana" English (zh-stp|s=尖叶白蜡树|t=尖葉白蠟樹|p=jiānyè báilàshù) and "Fraxinus stylosa" English (zh-stp|s=宿柱白蜡树|t=宿柱白蠟樹|p=sùzhù báilàshù) are used in (TCM) for , dysenteric disorder, and vaginal discharge. It is also good for the eyes where there is symptoms of redness, swelling, and pain. The dosage is 6-12 grams.

In , the World Tree is commonly held to be an ash tree, and the first man, Ask, was formed from an ash tree. Elsewhere in Europe, s were said to be repelled by ash leaves or a circle drawn by an ash branch. Irish folklore claims that shadows from an ash tree would damage crops. In , it is said that ash could be used to cure warts or rickets. See also the letter ash.

The ash exudes a sugary substance that, it has been suggested, was fermented to create the Norse "Mead of Inspiration." [http://www.musaios.com/ash.htm]

In , the name "Mountain ash" is applied to species the genus "", more commonly known in the UK as s and s, and the name "" is applied to " americanum" and other Zanthoxylums, all in the family , the rue and citrus family. In , many common species are called "ash" because they too produce hard, fine-grained timber. The best known of these is the Mountain Ash, the tallest broadleaf tree in the world.