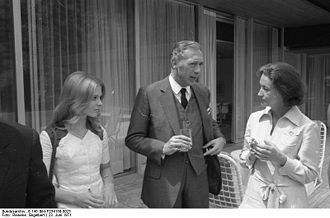 Horst Tappert at a reception of the Chancellor in 1971, with colleague Heidi Hansen (left) and minister Katharina Focke

All 281 60-minute episodes were written by veteran screenwriter Herbert Reinecker and produced by Helmut Ringelmann.[1] As a rule, new Derrick episodes were broadcast on Friday night at 20:15. The series received enormous popularity and was aired in more than 100 countries worldwide. In fact, there have only been a few areas around the world where Derrick has not penetrated, and the two protagonists long ago established for themselves a place in television history.

The huge numbers of fans all round the world who pay homage to the Derrick phenomenon include both young and old. Even before its last episode was shown on 16 October 1998 it had acquired cult status.

The fact that the series was discontinued in October 1998 had nothing to do with waning audience ratings. Rather, Horst Tappert, who played the main role for almost 25 years, had reached the age limit he had set himself.

Thanks to Derrick, Horst Tappert is the only German actor who has ever had fan clubs abroad including the Netherlands and France. Derrick was even broadcast in South Africa — dubbed in Afrikaans — throughout the Apartheid era.

Still, even though no new episodes are being produced, several countries are still broadcasting re-runs. Horst Tappert untiringly continues to investigate criminal cases in France, where he is known as Inspecteur Derrick; in Italy, he is called L’ispettore Derrick while the Chinese know him as Dé li kè.

The series took a noticeable turn towards psychological drama as time progressed and Derrick approached retirement age. Acting on a hunch, Derrick would ignore a number of possible suspects right from the start and, instead of doing the legwork often shown in police movies, would follow the main suspect to his or her favourite haunts and involve them in lengthy conversations, claiming that he had to get to know them better. Towards the end of the show the murderer, now revolted by what they had done, would then be prepared to confess to his or her crime without Derrick having to produce any further piece of evidence. Generally, there is little violence and bloodshed and no shoot-out at the end.

This philosophy also held true to the last episode, Das Abschiedsgeschenk ("The Farewell Gift"). Originally, Derrick was supposed to die by the hands of one of the criminals he had incarcerated just as he is about to take a new job as the chief of Europol. But the violent end was eventually scrapped; while there is a shoot-out, no one is killed, and Derrick goes on into the dark city and towards a new life.

With Derrick eliciting enthusiasm in some and sending shivers down the spine of others, there are very diverse explanations as to why people of such diverse cultural and linguistic backgrounds love the Munich Chief Inspector. The series' producer, Helmut Ringelmann, believes that Derrick’s success is because it ‘appeals to the basic emotions that govern human relationships — love, hate, fear — across all borders'.

Derrick and Klein do not seem to have any private lives — at least they are not shown and they in no way interfere with their work, which they frequently pursue in the evening. In that respect and also in the way he goes about a case, Derrick resembles Lt. Columbo. However, as Eco has pointed out, Columbo is the obedient, seemingly helpless servant of a community of rich and powerful Californians while Derrick, elegantly dressed and impeccably behaved, always appears in control and superior even to the wealthy people he is tracking down.

The series was surprisingly popular in China. Reportedly it was also actually used to teach police officers and inspectors in proper procedure of tracing and solving criminal cases.

The famous phrase "Harry, hol schon mal den Wagen" ("Harry, bring the car 'round"; implying "we're done here") was attributed to Derrick and became part of popular culture in at least two countries (Germany and China) and became catch phrases in at least those two countries' languages. Actually, this phrase was never spoken in any of the 281 episodes. It was used by Erik Ode in the earlier TV Series "Der Kommissar", where Fritz Wepper already played the character named Harry Klein, by then the assistant to a different police inspector (played by Ode). It is unknown how this phrase became attributed to Derrick, but one theory is that since "Der Kommissar" and "Derrick" were both created and written by screenwriter Herbert Reinecker, a TV Critic attributed this phrase to the wrong one of Reinecker's series, after which it entered popular culture as a catch phrase for Derrick. The only occasion where Horst Tappert ever spoke this phrase in character as Stephan Derrick was as voice actor of his animated self in the 2004 animated feature film "Derrick — die Pflicht ruft" ("Derrick -- Duty calls"). (See "Beam me up, Scotty" for a catch phrase with a similar background.) This animated film shed some satirical light on the ever-serious and sombre world of the original series, making fun of numerous clichés attributed to the series, including Harry's rumoured envy for Derrick always standing in the spotlight, while he, assistant for 25 years always had to stand back behind his boss

It was briefly referenced in Marjane Satrapi's Persepolis.

Derrick was also used as the protagonist for a series of books published in Germany and Italy: