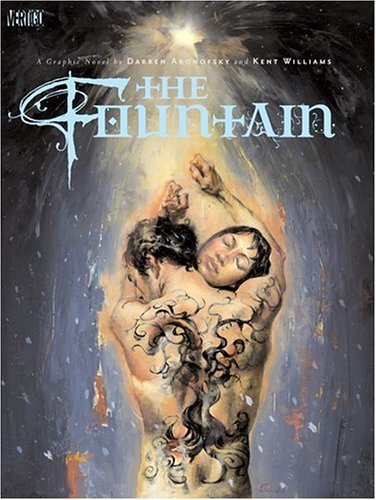 The Fountain is a illustrated by published in 2005 by , based on the original script of 's film "The Fountain".

The graphic novel was a way to salvage something from the film project, whose first production was cancelled. As Aronofsky said, "I knew it was a hard film to make and I said at least if Hollywood fucks me over at least I'll make a comic book out of it."

In the winter of , an army of Spanish soldiers is searching for the . Father Avila feels that their long journey is about to serve its purpose when he notices that a on a blade he is carrying matches a symbol drawn in the sky, as well as on the ground. He presumes this must be the location of the temple that houses the Tree of Life. The soldiers accompanying him are reluctant and feel that his theories will only add to the loss of soldiers they have had.

Captain Tomas Verde is seen holding a gold ring. He kisses the ring and says to "prepare the men."

The soldiers begin their assault on the temple only to be met by the Mayan warriors who are protecting the temple. Father Avila advances up the temple and is met by a Mayan priest who slowly emerges from the temple. He grabs Avila's throat, takes his knife and cuts out his heart and bites it. Captain Tomas progresses up the temple stairs to meet the Mayan Priest. He tells the soldiers that all they must do is drink from the tree and no one can harm them. Tomas and the Mayan priest stand ready to fight, when the priest takes his knife and stabs Tomas deep in the shoulder. Tomas is about to die.

In the winter of , a man is meditating on a tree. He and the tree are in a sphere on the edge of a that is surrounding a dying star. The nebula is named . The man is young "except for his wound." He grabs sap from the tree to spread across the wound. It never heals. A woman appears to the man, a woman that "never leaves" but is also never there. The woman tells him the tree is dying and if he continues to use it, they will die together. The man says he will not use the tree anymore. He says that once they reach the nebula, the energy will make the tree bloom again and they will both live. He hungers for the tree's sap and indulges himself. He begins meditating. He explains the tattoos on his arms. One ring for every year alive, just like the rings of the tree. He says he has tried to seed the tree to no avail. He goes to drink from the tree and discovers it has died. He screams in frustration before noticing particles from the nebula's edge. He thinks he is close enough to the nebula to save the tree. He uses a knife to exit the sphere. The woman tries to stop him and tells him the tree is already dead and that he cannot save it. Tom falls off the bubble and drifts away from the tree as the woman tells him to "remember your promise."

In the winter of , Thomas Creo meets a woman named Izzi and they share an intimate night under the stars. During sex, Izzi says that she wants to be with him, "together, forever."

The story cuts to the year . Dr. Thomas Creo is fatigued, sitting at a computer. He is about to perform surgery on a monkey that has a tumor. His colleagues tell him the surgery is canceled and they are going to euthanize the animal. Thomas brings up an ethnobotanical compound from that he insists be injected into the animal. He opens his text and points to a tree. Against his colleagues' objections, the monkey is injected with the sap.

Lilly, a fellow doctor, enters asking how Izzi is. Izzi, Thomas' wife, has cancer. Lilly tells Thomas he should be spending time with Izzi instead of working. Lilly scolds Thomas for for injecting the compound into the monkey.

Thomas goes home to find Izzi outside looking at the sky. She tells Thomas she is looking at a Nebula called Xibalba. She explains that it is where the Mayans believed dead souls go to be reborn. Thomas asks how she knows this and she says it's part of her book. He gives Izzi a bath and notices she can't feel temperature changes. He worries and puts her to bed. She stays up to write more of her book when Thomas' office calls asking him to come in.

In the office, he learns the tumor is the same but the monkey neural activity has increased. He goes back home to find Izzi asleep and lies down next to her. He awakes abruptly and screams for her. He feels his shoulder as if he is in pain. He finds a note that says Izzi has gone to the museum.

Thomas meets her in the museum. She tells him about the tree of life. She explains how the first Mayan created the tree by sacrificing himself. The tree burst from his stomach, his head became Xibalba and the roots became Earth. Izzi collapses in the museum and is brought to the hospital.

Thomas leaves Izzi to work on the monkey whose condition has improved despite the tumor still being present. Lilly sees him in the lab and yells at him for not being with Izzi. He returns to her and she hands him the book. The title is "The Fountain" and she asks him to finish it.

Thomas picks up the book and begins to read it. The first page of the book tells the same story as the story arc.

In the winter of , a friar is being tortured by the . The inquisitor wants to know what was found in Chetumal. The friar says he only answers to the queen before passing out.The queen enters, clutching a gold ring around her neck. The inquisitor flees the room and slips on a puddle of . He looks up and sees the body of a Dominican friar and notices the knife. The knife with the symbol that leads to the Tree of Immortality. Captain Creo enters and captures the inquisitor whose name is Silecio. She asks what the church wants and Silecio responds that they want the land that acquired recently, Chetumal. She says the only thing there is jungles and savages, but she plans to protect all God's creatures, even the savages of Chetumal.

The queen excuses herself and summons Captain Creo to her bedroom. They share an intimate moment. The queen tells Creo that she gave the church the land of Chetumal and brings in Father Avila to ask him what the church wanted there. He takes the Mayan knife out of his cloak and explains that the knife was taken from a Mayan Priest. The words on the knife describe a Mayan City, that houses the birthplace of life. Silecio says that the tree is life and life belongs to God and therefore he is the owner of the tree, not Spain. Creo charges at the Dominican friars until Silecio grabs the queen and places the knife to her neck. He says that Creo and his army must join the church in order to spare the queen's life. He refuses and Silecio calls for the executioner to chop off the queen's head.

The executioner enters and just when he is about to strike the queen, he reveals himself as Ariel. The queen then grabs the blade from Silecio and murders him. She tells Creo that they won today's battle but the Dominican church will be back again. She says the only way out of this is in Chetumal. The queen gives Creo the golden ring and tells him to return and release Spain from bondage. He takes the ring and says he will return with love eternal.

In 1997, Thomas realizes Izzi has died. He becomes enraged and is restrained by other doctors. He runs out to the hall screaming that he has a new enemy: death. Lilly asks Tom if he heard the good news. She explains that the monkey's tumor is gone. He becomes enraged again and runs to Izzi's bedside. Lilly screams at him and tells him it's over, Izzi is gone. He weeps and cries "It's not too late."

In , Tom is falling into oblivion screaming "Izzi." He remembers the Mayan Priest about to take his life after stabbing him deep in the shoulder.

In 1997, Thomas is reading Izzi's story "The Fountain." It ends, "A dream unfinished." He weeps. He takes Izzi's fountain pen and gives himself a tattoo of a ring around his finger.

He sees Lilly who tries to comfort him, telling him that Izzi was not afraid of death. He begins screaming. Death is only a disease to him, a disease that can be cured and pledges to never give up.

The story returns to 2463, Tom runs and hugs the woman and screams, "Izzi." He is alone, the woman disappears. He says it's all right. He understands that all life ends. He meditates and remembers his encounter with the Mayan warrior.

He coughs and flowers emerge from his mouth. He falls to the ground in pain. The gold ring falls from his hands. He lies on the ground and his stomach is spread wide open, flowers begin to spill from his intestines. He becomes the tree.

In 2463, Tom places the ring over the tattoo that he first gave himself. He hears the woman's voice again, "Are you afraid?" He responds, "A little, but it's all right." He then jumps from the sphere and into the depths of space. Xibalba explodes and the tree blooms again.

The woman is standing next to the lush flowering tree. She takes a seed from it. The story cuts to 1997 and we see Thomas enter his bedroom and lay next to Izzi. She asks if he will stay and he responds "Yes, forever."

The story cuts to the woman from the tree and the seed she carries. She walks in the snow to the grave of "Izzi Creo." She buries the seed in the snow next to her grave. We see Xibalba explode.