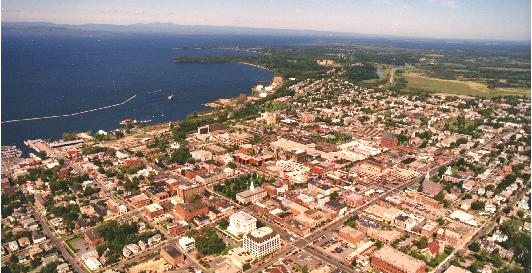 Burlington is the largest city in the of and is the shire town ()GR|6 of Chittenden County. [ [http://www.leg.state.vt.us/statutes/fullsection.cfm?Title=24&Chapter=001&Section=00005 Title 24, Part I, Chapter 1, §5] , Vermont Statutes. Accessed .] With a population of 38,889 at the 2000 census, the city is the core of one of the nation's smaller metropolitan areas, and is also the smallest U.S. city that is the largest city in its state. The urbanized area consists of the cities of Burlington, South Burlington, and Winooski; the towns of Colchester, Essex, and Williston; and the village of Essex Junction. As of 2000, the metropolitan area contained the three northwestern Vermont counties of Chittenden, Franklin, and Grand Isle, with an estimated 2006 population of 206,007, approximately one third of Vermont's total population. [ [http://www.census.gov/population/www/estimates/CBSA-est2006-annual.html US Government Census] ] [ [http://www.census.gov/popest/states/NST-ann-est.html Annual Population Estimates 2000 to 2007 ] ]

Burlington has a city council-mayor form of government. [ [http://www.ci.burlington.vt.us/ Burlington City Council] ] Democrats and the Progressive Party share seats. , the current mayor, is a Progressive who was elected in 2006. The City Council has 14 seats, which are currently occupied by 5 Democrats, 4 Progressives, 3 Republicans, and 2 Independents. , Burlington's longest serving mayor, held that office from 1989 to 1993, and again from 1995 to 2006.

The city maintains three parks on Lake Champlain. One is free, the other two have parking fees.

The average family size is 2.2 people. 12.59% of the people are married with children. 8.16% have children and are not married.

The city is situated on the eastern shore of , north of Shelburne Bay. It was built on a strip of land extending about 6 mi south from the mouth of the along the lake shore and rises from the water's edge to a height of 300 ft. [ [http://maps.maptech.com Maptech MapServer II ] ]

Lake Champlain as a body of water is often responsible for localized s, producing up to 13 inches in 12 hours on rare occasions. [http://apollo.lsc.vsc.edu/ams/AMS%20VP/Storm%20Conference/NESC%20Presentations/32ndNESC_Presentation/Abstracts/Payer.pdf]

The city is home to the corporate headquarters of , a chain of bakeries, , and . Downtown on Church Street is the Burlington Town Center mall with over 75 specialty shops and 15 national retailers such as , , , , and .

The G.S. Blodgett Company, one of the oldest and largest commercial oven companies in the country, manufactures restaurant equipment. Its history dates back to the mid 1800s.

, now a division of , develops software for the hospital industry and is headquartered in South Burlington. whose founder started on a cart on a Burlington street, is now a publicly traded company that ships custom teddy bears worldwide.

Burlington is home to ' central offices.

The Church Street Marketplace, a four block pedestrian mall in the heart of the city, is the site of festivals throughout the year. Events such as the and public galleries such as and , provide a forum for the visual arts. The named the Marketplace one of America's "Great Public Spaces" for 2008. [cite book | author = Briggs, John |title = Marketplace: 'Great Public Space' | publisher = Burlington Free Press | date = October 9, 2008]

The was not popular in Vermont. Along with the rest of New England, Vermont did not provide militia units or financial support. This was a serious blow to the cause. Vermont voted Federalist which opposed the war.

In a skirmish on August 2, 1813, the British shelled Burlington. This has either been cited as a bold stroke by the British with an ineffectual response from the Americans or a weak sally by the British properly ignored by the Americans, depending on who related the story. The cannonade lasted for about ten minutes and did not affect the outcome of the war. The American side was commanded by Naval Lieutenant , later the hero of the Battle of Lake Champlain.

Current U.S. Senator was the Socialist mayor of Burlington from 1981 to 1989.

In 2007, the city was named one of the top four "places to watch" in the United States. [http://www.rismedia.com/wp/2007-07-23/aarp-the-magazine-announces-top-five-places-to-live-and-retire retrieved on July 24, 2007] The ratings were based on what was perceived as ideal for older residents. Criteria included what makes a community livable: new urbanism, smart growth, mixed-use development, and easy-living standards

Burlington is the home of , a for Vermont and northern New York State, Level I Trauma Center, and teaching hospital.

Burlington is a , home to (UVM), , and to , as well as a campus. is located in nearby Colchester.

The for the is in Burlington. There are also Jewish synagogues (Orthodox- Chabad House, Conservative- Ohavi Zedek Synagogue).

Burlington has the largest public library in Vermont. In 2002, it had a budget of over $1 million, circulated more books, had more visitors, and had more computers, than any other library. [cite book | author = |title = Libraries on the rise | publisher = Burlington Free Press | date = July 25, 2008] Unlike most libraries in Vermont, it is publicly owned. The building was originally endowed by Andrew Carnegie. It is on the National Register of Historic Places.

The Burlington Waterfront on the shore of has bench swings, shoreline, and walking and bike paths. It provides a place to view the Adirondacks. , [ECHO=Ecology, Culture, History and Opportunity] housed in Vermont's first Certified Green Building, is located at the waterfront and harbors over 70 species of fish, amphibians, invertebrates, and reptiles.

The city has, over the years, supported a number of local bands as various "scenes" waxed and waned, and has even launched a handful of national acts. The most famous of these was , which originated at circa 1983.

Newspapers and other publications

The Burlington area is served by 4 network television stations. They include WFFF channel 44 (Fox), The CW network, on WFFF's digital subchannel 44-2, channel 22 (ABC), channel 5 (), and WCAX channel 3 (). WCAX, WFFF, and WPTZ operate news departments. WCAX is the only Burlington based news channel, while WPTZ is based in Plattsburgh, New York with a bureau in nearby Colchester.

Burlington is home to the , a Class A minor league baseball team. Formerly the Vermont Expos baseball club of the , it plays on the campus of UVM at Centennial Field.

Burlington is also home to a professional basketball franchise, the , for half of their season. The team, which is part of the American Basketball Association (ABA), splits their inaugural 2005-2006 season home games between Burlington and Barre. The Frost Heaves, owned by "" writer , play their Burlington games at the Memorial Auditorium, on South Union Street, at the corner of Main.

There is also a team in Burlington, the Burlington RFC.

Daniel W. Fish, a former member of the Air Force's Wings of Blue, was the first person to obtain a permit and skydive in the city of Burlington.

Burlington is the central focus of the , providing bus service to and from the surrounding communities (and the shopping districts of South Burlington and Williston). Burlington is also the headquarters of the with seasonal service provided between Burlington's King Street ferry terminal and Port Kent, New York.

Vermont Transit provides intercity bus service from a depot south of downtown, while rail service stops in the nearby village of Essex Junction.

Burlington is served by one major Interstate highway (along with its spur route into the southern part of the city), and is at the junction of two U.S. highways. Several Vermont state highways also provide routes into and through the Burlington area.