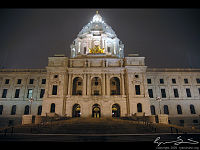 The building is set in a landscaped campus. Various monuments are to its sides and front. Behind, a bridge spans University Avenue, and in front others were later added over the sunken roadway of Interstate 94, thus preserving the sight lines. Set near the crest of a hill, from the Capitol steps a panoramic view of downtown St. Paul is presented.

The building was designed by Cass Gilbert and modeled after Saint Peter's Basilica in Rome - the unsupported marble dome is the second largest in the world, after Saint Peter's. However, like all capitols with domes in the US it is also inspired by the idea of domed capitols originating with the United States Capitol dome. Work began on the capitol in 1896, and construction was completed in 1905. It is the third building to serve this purpose: the first capitol was destroyed by fire in 1881, and the second was completed in 1883, but was considered to be too small almost immediately.

Above the southern entrance to the building is a gilded quadriga called The Progress of the State which was sculpted by Daniel Chester French and Edward Clark Potter. It was completed and raised to the roof of the capitol in 1906. The four horses represent the power of nature: earth, wind, fire and water. The women riding in the back of the chariot symbolize civilization while the man standing at the front of the chariot represents prosperity.[2] In 1994 and 1995, the statues underwent a restoration procedure which included replacing the gold leaf on the figures. A sphere perched above the capitol dome also has similar treatment. 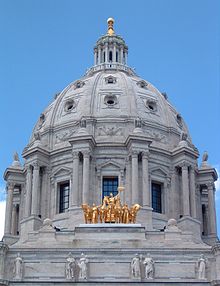 A mural depicting the North Star. Below the star are the French words "L'Étoile du nord", which translates as "The Star of the North", which is also the state motto. 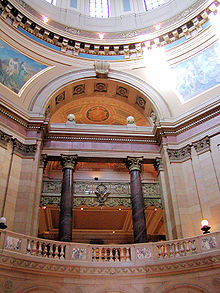 Any classical dome built since Michelangelo's must expect to be compared to it, and Gilbert's dome is a frank homage, with interesting differences. His drawings show that he originally planned a wider drum and, correspondingly, a more massive dome. The smaller dome as built could be criticized by some as too small. It is smaller than St. Peter's and has a simplified design: single columns round the upper lantern instead of double ones, for instance. The ribs on the capitol dome are less pronounced than those on St. Peter's, but they are still visually apparent. Gilbert knew that St. Peter's dome was on the edge of being unstable: it had cracked and had to be reinforced. His engineer for this project, Gunvald Aus, bound the brick dome in reinforcing steel bands, and Gilbert crowned the paired columns round the drum (which act as buttresses to counter the dome's weight) with additional stone. Other than St. Peter's, additional buildings with marble domes include the Taj Mahal in India, and the Rhode Island State House in the city of Providence. 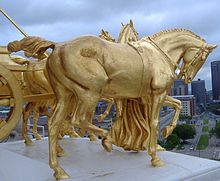 A close up of the quadriga. 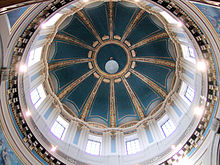 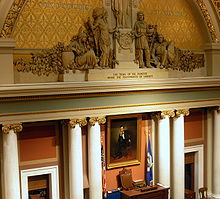 Above the House of Representatives Chamber is Lady Minnesota with two pioneers to her left. To her right are a Native American chief and Sacagawea (better seen in above picture) in honor of the people who lived in Minnesota before the pioneers. On the book that she holds in her left hand are both the dates of Minnesota's founding as a territory and state.

The central block under the dome needed three entrances, and Gilbert avoided creating visual references to a triumphal arch, which would have been inappropriate in its position. Equally, he managed to avoid any reference to a palace block that would have been offensive to Minnesotans. However, Gilbert drew ire for choosing stone from Georgia rather than native Minnesota stone. A compromise was eventually made where the base of the building and interior spaces used varieties of native stone, including Kasota stone, and the rare Pipestone used by Native Americans for their peace pipes. Upon completion, the exterior and interior of the building drew praise, leading to requests for Gilbert to design capitol buildings for other states such as West Virginia and Arkansas and other notable structures.

The capitol cost US$4.5 million at the beginning of the 20th century. It opened its doors to the public for the first time on January 2, 1905. A hundred years later, the building's estimated value was $400 million.

Most days of the week the building is open for individual visits, and organized tours are frequently given, including a stair climb onto the roof below the quadriga. Upon entering the building by the south door, one is below the central dome. A large star, symbolizing Minnesota's motto, "The Star of the North", is directly beneath the apex. Various portraits of state governors, and flags captured by Minnesota's regiments during the American Civil War, are on display. Paintings showing some of the related battles can be seen in the governor's outer office. Much of the building is open to the public, although one interesting sight is only rarely accessible. This is the cloak room behind the House of Representatives chamber. The walls are painted to simulate a north woods forest, but in one corner is a tiny four leaf clover. This was added by an Irish artist to remember his home island.

The structure was added to the National Register of Historic Places in 1972.

Memorials in the rotunda

Monuments on the grounds