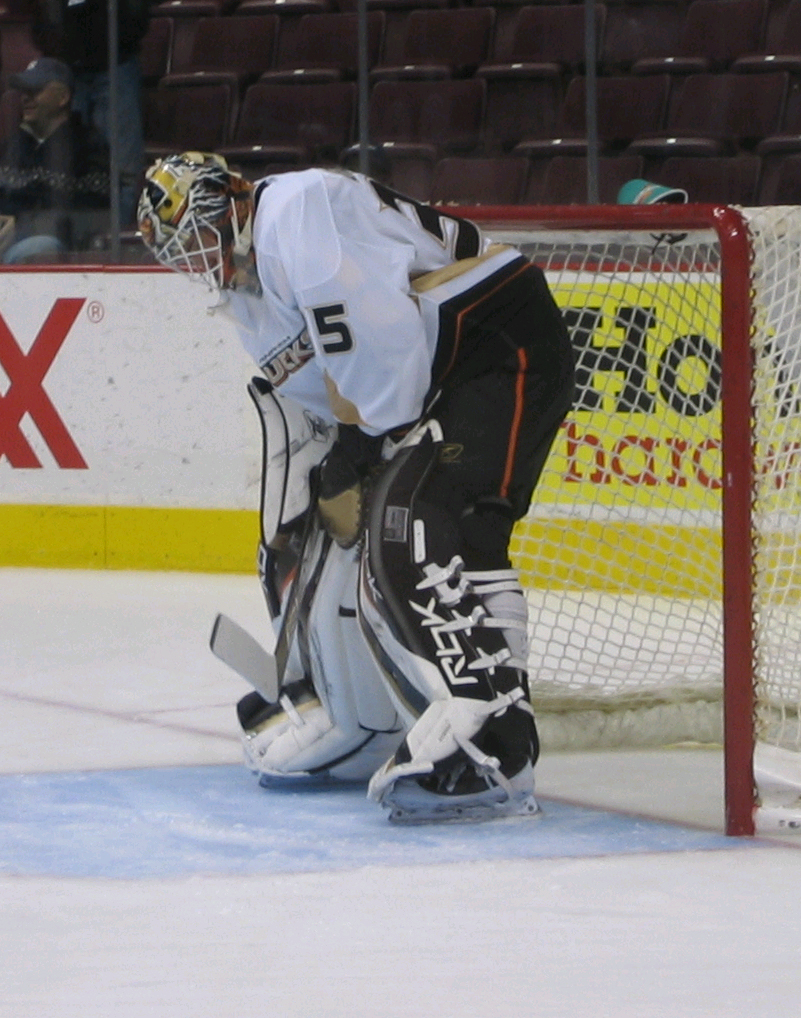 After brief and overall-mediocre stints in the Hartford and Calgary organizations, Giguère was traded by the Flames to the Mighty Ducks of Anaheim for a 2nd round selection in the . He began the 2000-01 season with the Ducks' farm team in Cincinnati, until he was recalled to their parent club for 34 games. After working with famous goalie coach , Giguère regained the confidence he showed in juniors and quickly became Anaheim's newest starter. In the 2002-03 season, "Jiggy" enjoyed the best season of his NHL career-to-date, with 34 wins, a .920 save percentage and an impressive 8 shutouts. Jiggy lead the Ducks to their first Stanley Cup in team history in 2007 with strong performance in the playoffs by going 13-4 with GAA of 1.97 and SV% of 0.922.

During the , Giguère led the Mighty Ducks to the , where they lost in seven games to the . He won the as most valuable player of the playoffs for his efforts in series wins against the , and and pushing the Finals to the seven game limit. He was a perfect 7-0 in overtime, setting a record for longest amount of playoff overtime played without allowing a goal at 168 minutes, 27 seconds, including multiple overtime victories in Game 1 of each of the first three series. He also held the Wild to an all-time best-of-7 series low of one goal in the entire Western Conference Finals, posting a shutout streak of 217 minutes, 54 seconds during that series. He finished with a 15-6 record, a 1.62 Goals Against Average and .945 Save Percentage (the best of all playoff goaltenders that year), and fewer losses than his Finals counterpart . He was the fifth player to receive the Conn Smythe Trophy playing for the losing team, the first since Philadelphia's in 1987.

After being rewarded with a large contract in the off-season, Giguère was inconsistent throughout much of the 2003-04 season as the Ducks missed the playoffs. Some hockey pundits speculated that he may have been rattled by coming so close to winning the the previous season, yet ultimately failing.

After the lockout canceled the 2004-05 season, Giguère returned for the '05-'06 season and appeared to have regained a level of play approaching his 2003 glory. In April 2006, he and the Ducks again entered the Stanley Cup Playoffs, but were eliminated in the Western Finals by the . Giguère appeared in just 4 games before being replaced in net by Russian rookie . With the first round series on the line, management seemed to have lost faith in Jiggy. In fact, Giguère's club record of consecutive playoff shutout minutes was broken by his backup's surprising string of three consecutive shutouts. His overtime playoff shutout record however was extended to 8-0 but was ended on April 27, 2007, in the second overtime against the Canucks.

Facing the prospect of being an unrestricted free agent at the end of the 2006-2007 season, Giguère started out hot and won his starting role back. In the first month of the season, October 2006, he did not lose a single game in regulation. He proceeded to put up the best numbers of his career, finishing with a record of 36-10-7.

Before winning the in 2007, Giguère had a son named Maxime. Due to this, he was unable to play in the first three games of the . In game four was pulled and it was Giguère's turn to shine.

On June 21, 2007, the club announced that the team had agreed to a multi-year contract with Giguère, keeping their Cup-winning starting goalie. Giguère posted a 35-17-6 record with a 2.12 in the 2007-2008 season. Despite his numbers, the defending champion Ducks were defeated in the first round of the 2008 playoffs by the Dallas Stars in six games.

*Giguère suffers from a rare gastric condition that causes his body to take in too much air when he drinks fluids. As a result, his body has difficulty absorbing water, with all the sweating he does during a game, thus leading to severe dehydration.