Australia's population has grown from an estimated population of about 350,000 at the time of British settlement in 1788 due to numerous waves of immigration during the period since. Also due to immigration, the European component of the population is declining as a percentage, as it is in many other Western countries.

Australia has scarcely more than two persons per square kilometre of total land area. With 89% of its population living in urban areas, Australia is one of the world's most urbanised countries.[2] The life expectancy of Australia in 1999–2001 was 79.7 years, among the highest in the world.

The earliest accepted timeline for the first arrivals of indigenous Australians to the continent of Australia places this human migration to at least 40,000 years ago most probably from the islands of Indonesia and Papua New Guinea.[3]

These first inhabitants of Australia were originally hunter-gatherer peoples, who over the course of many succeeding generations diversified widely throughout the continent and its nearby islands. Although their technical culture remained static—depending on wood, bone, and stone tools and weapons—their spiritual and social life was highly complex. Most spoke several languages, and confederacies sometimes linked widely scattered tribal groups. Aboriginal population density ranged from one person per square mile along the coasts to one person per 35 square miles (91 km2) in the arid interior. Food procurement was usually a matter for the nuclear family, requiring an estimated 3 days of work per week. There was little large game, and outside of some communities in the more fertile south-east, they had no agriculture.

Australia may have been sighted by Portuguese sailors in 1701, and Dutch navigators landed on the forbidding coast of modern Western Australia several times during the 17th century. Captain James Cook claimed the east coast for Great Britain in 1770, the west coast was later settled by Britain also. At that time, the indigenous population was estimated to have been between 315,000 and 750,000,[4] divided into as many as 500 tribes[citation needed] speaking many different languages. In the 2006 Census, 407,700 respondents declared they were Aboriginal, 29,512 declared they were Torres Strait Islander, and a further 17,811 declared they were both Aboriginal and Torres Strait Islanders.[5] After adjustments for undercount, the indigenous population as of end June 2006 was estimated to be 517,200, representing about 2.5% of the population.[4]

Since the end of World War II, efforts have been made both by the government and by the public to be more responsive to Aboriginal rights and needs. Today, many tribal Aborigines lead a settled traditional life in remote areas of northern, central, and western Australia. In the south, where most Aborigines are of mixed descent, most live in the cities. 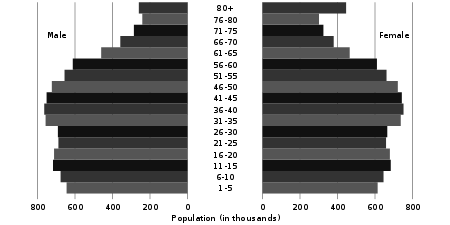 Australia's age and gender structure in 2005, illustrated in a population pyramid.[6]

Much of the data that follows has been derived from the CIA World Factbook and the Australian Bureau of Statistics, through censuses.

The following figures are ABS estimates for the resident population of Australia, based on the 2001 and 2006 Censuses and other data. 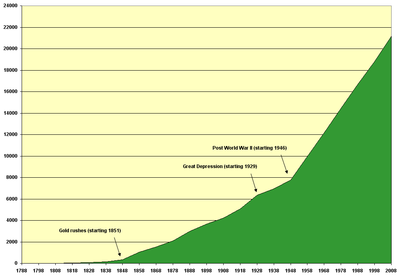 At the time of Australian Federation in 1901, the rate of natural increase was 14.9 persons per 1,000 population. The rate increased to a peak of 17.4 per thousand population in the years 1912, 1913 and 1914. During the Great Depression, the rate declined to a low of 7.1 per thousand population in 1934 and 1935. Immediately after World War II the rate increased sharply as a result of the beginning of the post–World War II baby boom and the immigration of many young people who then had children in Australia, with a plateau of rates of over 13.0 persons per 1,000 population for every year from 1946 to 1962.

country comparison to the world: 159

According to the Australian Bureau of Statistics, in mid-2006 there were 4,956,863 residents who were born outside Australia, representing 24% of the total population.[14] The Australian-resident population comprises people born in these countries:

For more information about immigration see Immigration to Australia.

For generations, the vast majority of both colonial-era settlers and post-Federation immigrants came from the United Kingdom and Ireland, although the gold rushes also drew migrants from other countries. Since the end of World War II, Australia's population more than doubled, spurred by large-scale European immigration during the immediate post-war decades. At this time, the White Australia Policy discouraged non-European immigration.

Abolition of the White Australia Policy in the mid-1970s led to a significant increase in non-European immigration, mostly from Asia and the Middle East. About 90% of Australia's population is of European descent. Over 8% of the population is of Asian descent (predominantly Chinese, Vietnamese, Filipino and Indian).[15] The total indigenous population is estimated to be about 520,000 individuals, including people of mixed descent.[4] The population of Queensland also includes descendants of South Sea Islanders brought over for indentured servitude in the 19th century.

In the 2006 Australian Census residents were asked to describe their ancestry, in which up to two could be nominated. Proportionate to the Australian resident population, the most commonly nominated ancestries were:[15]

At the 2006 Census 455,026 people (or 2.3% of the total Australian population) reported they were of Aboriginal and/or Torres Strait Islander origin.[5]

Australia is a religiously diverse country and has no official religion.

Christianity is the predominant faith of Australia. According to the 2006 census, the largest religious denomination is Roman Catholicism, of which 25.8% of the population claimed affiliation. The next largest is the Anglican faith, at 18.7%. Members of other Christian denominations accounted for 19.4% of the population.

Minority religions practiced in Australia include Buddhism (2.1% of the population), Islam (1.7%), Hinduism (0.7%) and Judaism (0.4%). Two percent of the population stated a different religion, which includes Sikhism and Indigenous beliefs, and 18.7% claimed no religion, while 11.2% did not respond.[16]

The Australian Bureau of Statistics 2001 Census Dictionary statement on religious affiliation states the purpose for gathering such information:

Data on religious affiliation are used for such purposes as planning educational facilities, aged persons' care and other social services provided by religion-based organisations; the location of church buildings; the assigning of chaplains to hospitals, prisons, armed services and universities; the allocation of time on public radio and other media; and sociological research.

As in many Western countries, the level of active participation in church worship is lower than would be indicated by the proportion of the population identifying themselves as Christian; weekly attendance at church services is about 1.5 million, or about 7.5% of the population.[17] Christian charitable organisations, hospitals and schools play a prominent role in welfare and education services. The Catholic education system is the second biggest sector after government schools, with more than 650 000 students (and around 21 per cent of all secondary school enrolments). The Anglican Church educates around 105,000 students and the Uniting Church has around 48 schools.[18]

English is the de facto national language of Australia and is spoken by the vast majority of the population.