Northfields is a London Underground station in Northfields, west London. The station is on the Heathrow branch of the Piccadilly Line, between Boston Manor and South Ealing stations. It is located on Northfield Avenue (B452) near Lammas Park, and in Travelcard Zone 3. 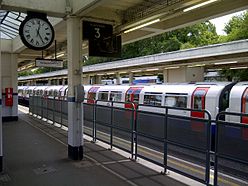 Interior of the Northfields Tube Station

The station was rebuilt twice. As a Halt, the 1908 station was quite basic and provided only rudimentary shelters for passengers. The first rebuilding took place in the 1910s (possibly in conjunction with the 1911 renaming) and the station was given a proper booking hall on the bridge over the tracks and better platform canopies.

In the early 1930s a new Northfields station was built in conjunction with the preparations for the introduction of Piccadilly Line services on the Hounslow branch and the new Northfields depot that would house its trains. Located on the east side of Northfields Avenue, the new station was designed by Charles Holden in a modern European style using brick, reinforced concrete and glass. Like the stations at Sudbury Town, Sudbury Hill, Acton Town and Oakwood that Holden also designed, Northfields station features a tall block-like ticket hall rising above a low horizontal structure that contains station offices and shops. The brick walls of the ticket hall are punctuated with panels of clerestory windows and the structure is capped with a flat concrete slab roof.