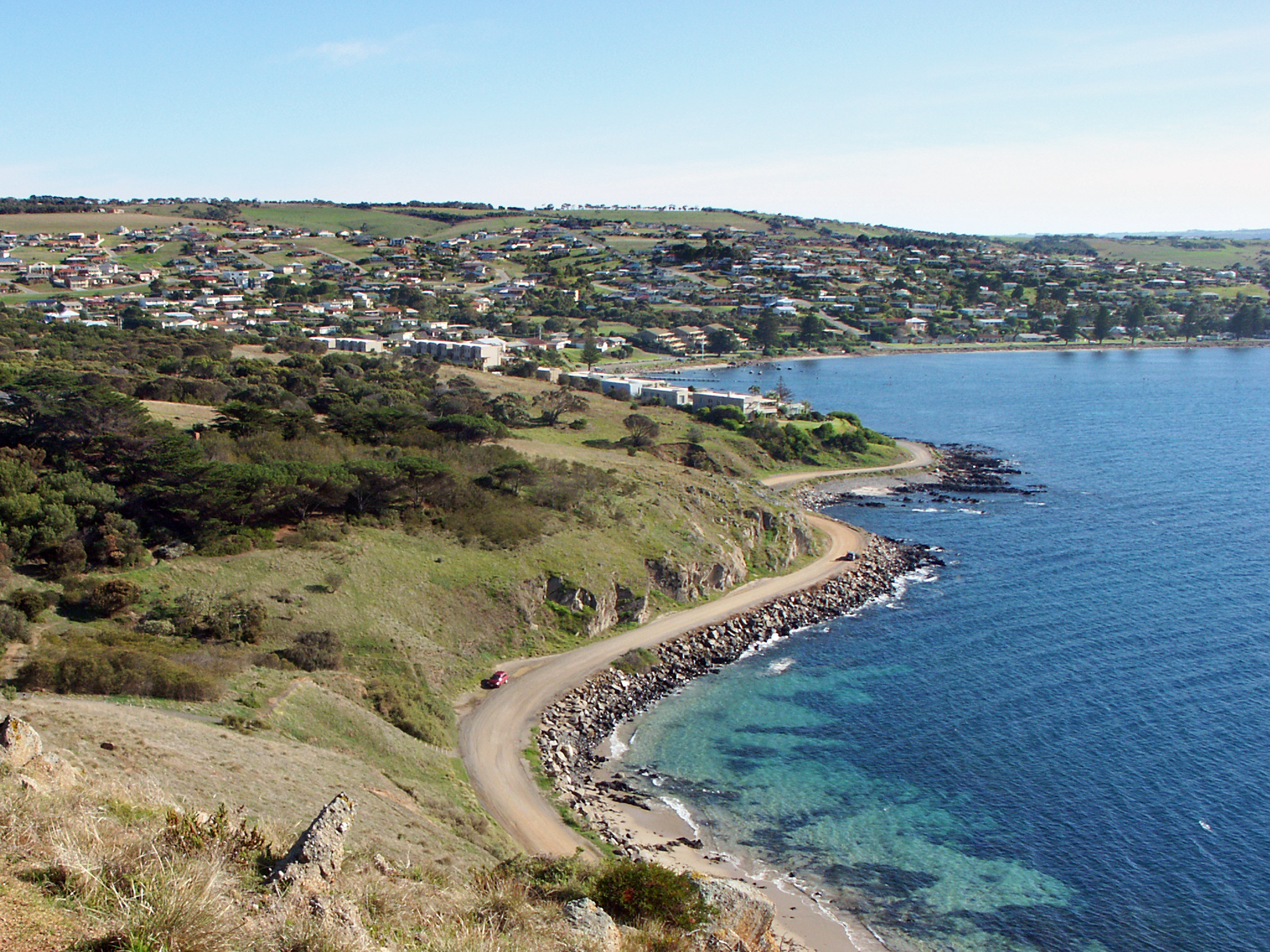 Victor Harbor is a city located on the coast of the , located 80km south of , . The city is the largest population centre on the peninsula, with an based upon , and various industries. It is also a highly popular destination, with the city's population greatly expanded during the summer holidays.

Explorer on his ship the Investigator, discovered and named Encounter Bay after his encounter near the Murray Mouth with French explorer Nicholas Baudin on the ship “Le Geographic”.

In 1837 two whaling stations were established, one at the Bluff (Rosetta Head) and the other near the point opposite Granite Island and whale oil became South Australia’s first export.

In his ship, “HMS Victor”, Captain Crozier anchored just off Granite Island and named the adjacent mainland Victor Harbor after his ship. The town of Victor Harbor itself did not exist until 1863, when stone buildings first appeared.

The last whale was caught off Victor in 1872.

Victor Harbor was originally called Port Victor, but its name was changed in 1921, as a result, it is said, of a near shipwreck blamed on confusion with Port Victoria in the . Despite the fact that "harbour" is normally spelt with a "u" in , the name of the city is spelt "Victor Harbor". This spelling, found in several geographical names in South Australia, including Adelaide Outer Harbor, is the result of spelling errors made by an early Surveyor General of South Australia.

The area has a population of around 13,000, but can swell to close to 50,000 in summer time, and was declared a city in . As a Local Government Area, the City of Victor Harbor includes the surrounding rural area and the contiguous township of Encounter Bay as well as the town of Victor Harbor itself; its total area is 34,463 . It shares boundaries with the District Councils of Yankalilla and Alexandrina Councils. The city is in the state and the federal .

A popular site for visitors is Granite Island, which is connected to the mainland by a short / . The tram service is provided by the , one of the very few horse-drawn tram routes remaining in public transit service. Another popular attraction is the "Cockle Train" historic railway operated by to .

During the months of June to September Southern Right whales can be sighted throughout the waters of Victor Harbor’s Encounter Bay. The South Australian Whale Centre located at Victor Harbor provides hands on interactive activities and presentations as well as information on whale watching tips, which has become one of the regions most popular tourist activities.

Another popular tourist attraction at Victor Harbor is the penguins at nearby Granite Island. Colonies of penguins inhabit the island and each evening come ashore, returning to their burrows. Daily penguin walks are held at dusk.

Victor Harbor is the centre of the surf zone known as the "South Coast" to and local surfers. Popular surf beaches in the area include Parsons, Waitpinga, Middleton and . The Granite Island breakwater ensures that the surf in the centre of Victor Harbor itself is fairly calm, although when the swell is really big there is a break known as the "Dump" that breaks right in town.

Victor Harbor also offers numerous fishing opportunities varying from offshore reefs for larger boat based anglers to excellent surf fishing on the beaches closer to the .

This town hosts a three day schoolies festival in late November mainly for South Australian school leavers. Victor Harbor hosts the second largest Schoolies Week Festival after the Gold Coast. The centre of the town is a dry zone and hosts various live music and other events for participants.