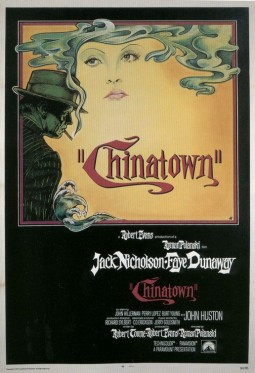 "Chinatown" is a fy|1974 American film, directed by . The film features many elements of the genre, particularly a multi-layered story that is part mystery and part psychological . It stars , , and . Also appearing in the film are , , , , , , , and .

The film was nominated for eleven , winning in the category of for . In 1991, "Chinatown" was selected for preservation in the United States by the as being "culturally, historically, or aesthetically significant".

A sequel, called "", was released in fy|1990, starring Jack Nicholson (who also directed it), with a screenplay written by .

A Los Angeles named Jake "J.J." Gittes (Nicholson) is hired to spy on Hollis Mulwray, the chief engineer for the city's water department. The woman hiring Gittes claims to be Evelyn Mulwray, Hollis' wife. Mulwray spends most of his time investigating dry riverbeds and drainage outlets. Mr. Mulwray also has a heated argument in public with an elderly man. Gittes finally catches Mulwray during an outing with a young blonde and photographs the pair, which becomes a scandal in the press. After the story is published, Gittes learns that the woman who hired him was not the real Evelyn Mulwray.

Clues suggest a scandal in the city government: Despite a serious drought and an expensive proposal to build a new dam (a plan Mulwray vehemently opposes), the Water and Power department is dumping fresh water into the ocean at night.

On a tip, Gittes seeks out Mulwray at a reservoir but finds the police there instead, investigating Hollis Mulwray's death from drowning. When the police speak to Mrs. Mulwray about the death, they assume she hired Gittes, which Gittes corroborates. She thanks him and hires him to investigate what happened to her husband.

Later that night, while breaking into the reservoir's secured area, Gittes is confronted by water department security, Claude Mulvihill and a short thug (a cameo by Polanski), who slashes Jake's nose for being a "very nosy fella." Gittes receives a call from Ida Sessions, the woman who was hired to pretend to be Mrs. Mulwray, who suggests that Gittes look at that day's column. At the water department, Gittes notices photographs of the elderly man Mulwray quarreled with, Noah Cross (Huston), a few days before his death. Cross, who is Evelyn Mulwray's father, used to own the water department as Mulwray's business partner. Cross ended his association with the department when the partners sold it to the city.

Cross hires Gittes to find the blonde girl Hollis had been seeing, saying that she might know what happened to him. Acting on a hint from Sessions, Gittes begins to unravel an intricate water scandal. Cross and his partners have been forcing farmers out of their land so they can buy it cheap, after which a newly-built (and controversial) and water system would start redirecting much of L.A.'s water supply to that land, dramatically increasing its value. Since Cross wants no record of such transactions, he has partnered with a retirement home community in such a way that many of the eldest residents within (one of whom is mentioned in the obituary column) would legally, but unknowingly, own the land.

Back at Evelyn's house, Gittes and Evelyn share a romantic interlude. As they lie in bed afterward, the phone rings. Evelyn has a cryptic conversation with someone, then informs Jake that she has to leave for a little while. She gravely asks him to trust her. Gittes follows Evelyn to a middle-class house and sees Mulwray's girlfriend crying. Evelyn claims this is her sister, who was crying because she had just learned about Hollis' death. Later that night, Sessions is murdered. Police Lt. Escobar points out that the 's report proves that salt water was found in Mulwray's lungs even though the body was found in a freshwater .

Gittes returns to Evelyn's mansion, where he discovers a pair of eyeglasses in a garden saltwater pond. Gittes confronts Evelyn, who reveals that the blonde girl, Katherine, is both her sister "and" her daughter; Gittes asks Evelyn if her father d her and she shakes her head no. It remains unclear whether the act was consensual or not; Evelyn's father later hints that it was indeed a consensual incestuous relationship by saying: "Most people never have to face the fact that, at the right time and the right place, they're capable of anything". It is apparent also that Evelyn resents her father for taking advantage of her in a relationship considered unnatural. Gittes then chooses to help Evelyn escape. Evelyn remembers that the eyeglasses could not have been her husband's because they are . Gittes arranges for the two women to flee to and instructs Evelyn to meet him at her butler's address in Chinatown.

Evelyn leaves, and Lt. Escobar arrives, who drives Jake to his friend Curly's house, under the pretext that Evelyn is hiding at the maid's house. Jake gives the police the slip and asks Curly to drive the women to Mexico.

Gittes confronts Cross with the accusation of murder and the glasses. Mulvihill takes away the eyeglasses that are the only physical evidence. Cross forces Gittes to take him to the girl. When Gittes arrives at Evelyn's hiding place in Chinatown, the police are already there and arrest Gittes.

When Cross approaches Katherine, demanding custody of her, Evelyn pushes him back, shoots him in the arm and starts her car. As Evelyn is driving away, the police open fire and Evelyn is shot and killed. Cross clutches Katherine, taking her out of the car, as a devastated Gittes is comforted by his associates, who urge him to walk away: "Forget it, Jake. It's Chinatown."

The plot is based in part on real events that formed the , in which acted on behalf of interests to secure water rights in the .

"Chinatown" was set in the 1930s and portrays water department corruption. It was the first part of a planned written by about the character J.J. Gittes and Los Angeles government. The second part, "", was about the department in Los Angeles in the 1940s. It was directed by Jack Nicholson and released in 1990, however, the second film's commercial and critical failure scuttled plans to make "Cloverleaf", a film about the development of the Los Angeles system in the late 1940s.

The characters Hollis Mulwray and Noah Cross are both references to the chief engineer for the Los Angeles Department of Water and Power, (1855-1935) &mdash; the name Hollis Mulwray is partially an anagram for Mulholland. The name Noah is a reference to a flood &mdash; to suggest the conflict between good and evil in Mulholland. Mulholland was the designer and engineer for the , which brought water from the Owens Valley to Los Angeles. The dam Cross and the city want to build is opposed by Mulwray for reasons of engineering and safety. Mulwray says he will not make the same mistake as when he built a previous dam, which broke resulting in the deaths of hundreds. This is a direct reference to the disaster. The dam was personally inspected by Mulholland himself before it catastrophically failed the next morning on March 12, 1928. More than 450 people, many of them school children died that day and the town of Santa Paula was buried

Robert Towne says he took the title, and the famous exchange, "What did you do in Chinatown?" / "As little as possible", from a Hungarian who had worked in Chinatown. The cop explained to Towne that due to the complicated array of dialects and gangs in Los Angeles's Chinatown, it was impossible for police to know whether they were helping victims or being used by criminals while intervening in Chinatown affairs, so police decided the best course of action was to do as little as possible.

Polanski found out about the script through Nicholson, with whom he had been planning to make a film once they found the right story. Producer Robert Evans wanted Polanski to direct as well, because he desired a European vision of America. Polanski, just a few years removed from the murder of his wife in Los Angeles, was initially reluctant to return to America to film in that particular city, but was persuaded to accept the project based on the strength of the script.

Towne wrote the screenplay with Nicholson in mind. He intended the screenplay to have a happy ending with Cross dying and Evelyn Mulwray surviving. Towne and Polanski argued over it, with Polanski insisting on a tragic end. The two parted ways due to the dispute and Polanski wrote the final scene just a few days before it was shot.

The original script was over 180 pages. Roman Polanski eliminated Gittes' voiceover narration, which was written in the script, and filmed the movie so the audience discovered the clues at the same time Gittes did.

Polanski originally offered the cinematographer position to , Paramount agreed and Fraker accepted. Paramount had previously hired Fraker to shoot for Polanksi on "Rosemary's Baby". When Robert Evans became aware of the hire he insisted the offer be rescinded. Evans, who had also produced "Rosemary's Baby," felt pairing Polanski and Fraker yielded a team with too much power on one side, and would thus complicate the production.

Polanski appears in a cameo as the gangster who cuts Gittes' nose. The effect was accomplished with a special knife, which could have actually cut Nicholson's nose if Polanski had not held it correctly. In keeping with the tradition Polanski credits to , all of the events of the film are seen subjectively through Gittes' eyes, for example, when Gittes is knocked unconscious, the film fades to black and then fades back in when he awakens. Gittes appears in every scene of the film.

Polanski was outraged when producer Robert Evans ordered the film lab to give "Chinatown" a reddish look.Fact|date=April 2008 Polanski demanded that the film be corrected.

Phillip Lambro was originally hired to write the film's music score, but it was rejected at the last minute by producer Robert Evans, leaving only 10 days to write and record a new one. Parts of the original Lambro score can be heared in the original trailer for the movie. The haunting trumpet solos are by the Hollywood studio musician Uan Rasey. Goldsmith received an Academy Award nomination for his efforts.

Evans says that the film cemented Nicholson, then a rising star, as one of Hollywood's top leading men.

This was the last movie Roman Polanski filmed in the U.S., after he was arrested and convicted of statutory rape.

Because "Chinatown" was planned as the first film in a trilogy, Nicholson turned down all detective roles he was offered so that the only detective he played would be Jake Gittes.Fact|date=February 2007.

Evelyn Mulwray is, according to the screenwriter Towne, intended to initially seem to be the classic "black widow" character typical of lead female characters in film noir, yet is eventually revealed to be the only selfless character in the film. was strongly considered for the role, but Polanski pushed for Dunaway.

Noah Cross. Towne says that Huston was, after Nicholson, the second best cast actor in the film, and that he made the Cross character evil through his charming and courtly performance.