RAF Manston was an RAF station in the north-east of Kent, at grid reference TR334663 on the Isle of Thanet from 1916 until 1996. The site is now split between a commercial airport Kent International Airport (KIA) and a continuing military use by the Defence Fire Training and Development Centre (DFTDC), following on from a long standing training facility for RAF firefighters at the Manston base.

At the outset of the Great War, the Isle of Thanet was equipped with a small and precarious landing strip for aircraft at St Mildreds Bay, Westgate, on top of the chalk cliffs, at the foot of which was a promenade which had been used for seaplane operations.

The landing grounds atop the cliff soon became the scene of several accidents, with at least one plane seen to fail to stop before the end of the cliffs and tumble into the sea, which for the fortunate pilot had been on its inward tide.

In the winter of 1915-1916 these early aircraft first began to use the open farmlands at Manston as a site for emergency landings. Thus was soon established the Admiralty Aerodrome at Manston. It was not long after this that the training school, set up originally to instruct pilots in the use of the new Handley Page bombers, was established, and so by the close of 1916 there were already two distinct units stationed at Manston, the Operational War Flight Command and the Handley Page Training School.

Its location near the Kent coast gave Manston some advantages over the other previously established aerodromes and regular additions in men and machinery were soon made, particularly, in these early days, from Detling. By 1917 the Royal Flying Corps was well established and taking an active part in the defence of England.

At a time when Zeppelin raids were bringing the war directly to English civilians, daylight bombing raids by German 'Gotha' Bombers, a twin engined biplane, would have been considerably more effective were it not for the RFC's presence at Manston.

The German air raids had lasted for thirteen weeks, the last being on 22 August 1917. On this occasion, of the 15 bombers that set out for England five did not reach the Kent coast, and the 'spirited' intervention from Manston based fighters prevented those remaining from flying further west, three being destroyed outright and the remaining seven returning to Germany with dead and wounded on board.

Shortly after such formation raids and in consequence the Cabinet recommended the creation of a separate Air Ministry. The RAF was officially formed on 1 April 1918. 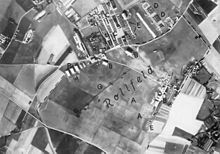 In World War II, during an eventful Battle of Britain, Manston was heavily bombed and airfield buildings destroyed. This caused dispersal of many of the staff to surrounding housing. For example, WAAFs (members of the Women's Auxiliary Air Force) stationed at Manston were billeted at the nearby Ursuline Convent in Westgate on Sea. Barnes Wallis used the base to test his bouncing bomb on the coast at nearby Reculver prior to the Dambusters raid. [1] A prototype is on public display at the Spitfire & Hurricane Museum. Hawker Typhoon attack aircraft were based there later in the war, and also the first Meteor jet squadron of the RAF. It was used as a departure point for airborne forces in Operation Market Garden. It was one of the few airfields installed with the Fog Investigation Dispersal Organisation (FIDO) system designed to remove fog from airfields by burning it off with petrol. Along with Carnaby and Woodbridge, Manston was developed as an east coast emergency landing ground for bomber crews. Each of these airfields had a runway 9000 feet long by 750 feet wide intended for use by returning bombers suffering from suspected damage to their pneumatic (wheel brake) systems. Being close to the front-line, the airfield became something of a magnet for badly damaged aeroplanes that had suffered from ground fire, collisions, or air attack but retained a degree of airworthiness. The airfield became something of a "graveyard" for heavy bombers and no doubt the less-damaged portions of aircraft landing or otherwise arriving here sometimes provided spare parts for other allied aircraft in need of repair. The museums on site display some startling aerial views dating from this era and the post-war years. After World War 2, the runway was reconfigured, becoming 200 feet wide with a full-length parallel taxiway, both within the original paved width. 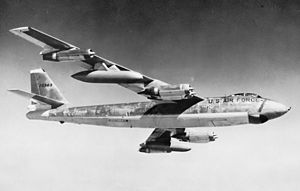 During the Cold War of the 1950s the United States Air Force used Manston as a Strategic Air Command base for its fighter and fighter-bomber units.

In the early 1950s, SAC's backbone bombers were the Convair B-36 and Boeing B-47 Stratojet. To support this strategy, the SAC 7th Air Division was established in May 1951. At the time, Manston had only partially recovered from the ravages of World War II. There were still makeshift bomb shelters, i.e. trenches with tin roofs, and many large circles of lush green grass where Luftwaffe bombs had cratered the runway. The RAF control tower overlooked a bizarre hilltop runway, which was an extraordinary 750 feet wide and 9000 feet long. The 7th AD expanded Manston by building concrete bunkers suitable for nuclear weapons and upgrading the support facilities for long-term use.

By the summer of 1953, the 7th AD began a series of temporary deployments of B-47 and B-36 wings from the United States to the United Kingdom. These deployments generally involved about 45 aircraft, together with about 20 KC-97 Stratotankers which were maintained at the English bases for 90 days. At the end of the Temporary Duty (TDY), they were relieved by another SAC wing that was generally stationed at a different airfield. These deployments continued until 1955 when SAC shifted its rotational deployments to RAF Fairford and Manston was turned over to the United States Air Forces in Europe.

In July 1951 SAC deployed the 12th Fighter-Escort Wing to Manston to provide fighter escort for its rotational bombardment wings. The 12th, however, only remained at Manston until 30 November when it was replaced by the 123d Fighter-Bomber Wing, with the 12th being transferred to Japan for combat duty during the Korean War.

The 123d was an umbrella wing that was formed from several Air National Guard squadrons activated for Federal service during the Korean War. This wing was activated at Manston with three ANG fighter squadrons:

The 123d utilized the F-84E "Thunderjets" left behind by the 12th FEW and continued the same mission of fighter escort of SAC's bombers.

In July 1952 the Air National Guard squadrons were returned to State control, and USAFE assumed the fighter escort role. In its place, the 406th Fighter-Bomber Wing was activated in place at Manston with the following squadrons assigned:

A change of mission for the 406th in April 1954 from fighter-bomber to fighter-interceptor came with a change of equipment. The F-86D Sabre interceptor began to arrive and the F-86F's were transferred to other USAFE squadrons and NATO countries. In addition, the 512th FBS was transferred to Soesterberg Air Base, Netherlands with their F-86Fs.

In June F-86D's arrived from CONUS to equip the 87th Fighter-Interceptor Squadron which was transferred to the 406th from the 81st FBW assigned to RAF Shepherds Grove. The 87th FIS, however, physically remained at Shepherds Grove, but was under the organisational command of the 406th at Manston. In September 1955, the 87th was redesignated the 512th FIS.

On 15 May 1958 the 406th was deactivated in place, with its three air defence squadrons being assigned to continental Europe under the 86th Air Division (Defense) at Ramstein Air Base West Germany. The squadrons were transferred to the following bases:

After the transfer of the USAFE interceptors at Manston the base was returned to the RAF control.

Return to RAF use

With the USAF's withdrawal from Manston, the airfield became a joint civilian and RAF airport from 1960 and was thence employed for occasional package tour and cargo flights, alongside its continuing role as an RAF base. The Air Cadets used the northern side of the airfield as a gliding site, and 1 Air Experience Flight flying De Havilland Chipmunks was also based there. Thanks to its long runway, (built during World War II, along with Woodbridge's, to allow returning damaged bombers a longer than usual runway to land on) Manston was designated as one of the UK's MEDAs (Master Emergency Diversion Airfield) for emergency military and civilian landings. Others included Greenham Common, Aldergrove and Macrihanish

For a number of years,[when?] the base operated as a Master Diversion Airfield, open 24 hrs every day. Manston, uniquely in the UK, also had a 'foam carpet' crash landing system, where two tractors would pull tankers laying a metre thick layer of foam over a strip of runway, for aircraft with landing gear problems.[1]

From 1989 Manston became styled as Kent International Airport, and a new terminal was officially opened that year by the Duchess of York. 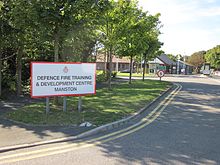 The DFTDC is still an active military base.

In 1996, Manston's satellite station RAF Ash, was closed, and in 1999, it was decided to close the RAF Manston base. The 'airside' portion of the base was signed over to the commercial operator of Kent International Airport.

The MOD decided to keep the central fire training school (CTE) facility open, and almost the entirety of the 'domestic' side of the base became FSCTE Manston (Fire Service Central Training Establishment). In 2007 the Army took over responsibility for firefighting across the armed services (except the Royal Navy whose Aircraft Handling Branch are the Fire Fighters at Naval Air Stations and are trained it RNAS Culdrose at the School of Flight Deck Operations)and the school became the Defence Fire Training and Development Centre (DFTDC).

There are currently three museums on the former RAF Manston site, in a cluster on the north side :