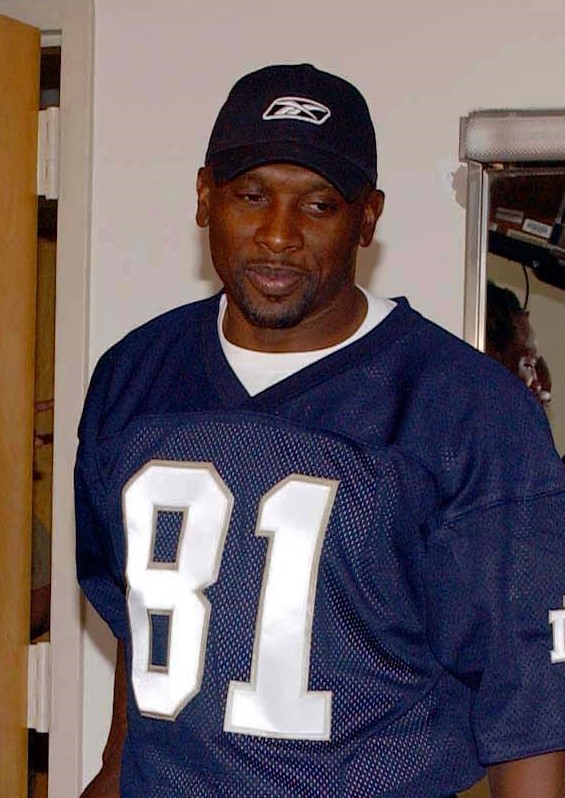 Timothy Donell Brown (born , ) is a retired , who played college football for Notre Dame, where he won the Heisman Trophy, and in the . He spent sixteen years with the , during which he established himself as one of the League's most prolific wide receivers. His fame and success with the Raider's organization earned him the title, "Mr. Raider".

Before his college career, Brown played for Woodrow Wilson High School in , the same school as 1938 winner . Despite his contributions, the team fared poorly, with a 4-25-1 record over his three years as a starter. Nevertheless, Brown was heavily recruited by major colleges. His five official visits were to Notre Dame, Nebraska, Oklahoma, nearby SMU and Iowa [ [http://www.blueandgold.com/content/?aid=1533&pageID=1 BlueandGold.com // No. 4: Tim Brown ] ] .

Brown chose Notre Dame and played there from 1984-1987, earning the nickname "Touchdown Timmy." In his first year, he set a freshman record with 28 receptions. As a junior, he set a record with 1,937 . He made the twice and won the Heisman Trophy in 1987, becoming the first wide receiver ever to win the award. His alma mater, Woodrow Wilson High School, became the first high school in history to produce more than one Heisman winner; as of 2007, Woodrow is still the only with two winners, though Mater Dei has matched the record. During that year, he caught 34 passes for 846 yards, returned 34 punts for 401 yards, rushed for 144 yards, and gained 456 yards on 23 s. He also scored eight touchdowns. Brown finished his career at Notre Dame with 137 receptions, a school record 5,024 all-purpose yards, and 22 touchdowns.

However, just as in high school, Brown's team achieved limited success, with a 25-21 record over his four seasons, and an 0-2 record in bowl games. Ironically, in the year after Brown graduated (1988), Notre Dame won the national title.

Brown was selected by the with the 6th pick of the . In his first NFL season, he led the league in kickoff returns, return yards, and yards per return average. He also led the NFL in s in 1994, and receptions in 1997. He was voted to the nine times, in 1988 and 1991 as a kick returner, and in 1993-97, 1999 and 2001 as a receiver. In 2001, Brown would later play alongside another well-known wide receiver, . In 2002 he passed to become the Raiders' all-time leader in games played with 224. He also set Raiders franchise records for receptions, receiving yards, and punt return yards.

Brown was released by the Raiders before the 2004 season, as he did not want to accept a smaller role in the offense. He was signed shortly thereafter by the Buccaneers (coached by former Raider head coach ). The move was mildly controversial. Brown had always been a fan favorite in the Oakland area and was much admired by many current and former Raiders players and staff over the 15 years he spent with the Raider organization. However, Brown's declining performance in recent years may have contributed to the decision to release him. He was the last of the to remain with Oakland.

In 2005, Brown signed a one-day contract with the Raiders to retire with the team he had played 16 seasons for. The news conference was attended by two Raiders' officials, and only one active Raider, wide receiver Jerry Porter. Brown retired with 14,934 receiving yards, the second-highest total in NFL history, 1,094 receptions (3rd), and 100 touchdown catches (3rd-Tied). Brown also gained 190 rushing yards, 3,320 punt-return yards, 3 fumble-return yards, and 1,235 yards returning kickoffs. This gave him a total of 19,682 combined net yards, ranking him #5 among the NFL's all-time leaders in that category at the time of his retirement. He also scored 105 total touchdowns (100 receiving, 1 rushing, 3 punt returns, 1 kickoff return).

Brown is currently starting a racing team as part of their program. He is recruiting sponsors to fund the venture, and has worked out a technical alliance with , who will provide support to the upstart team. Brown hopes to eventually find a black, Hispanic, or woman driver to be the star of his team in order to bring an element of diversity to what is a white-dominated sport. He now lives in .

* Caught his 1,000th reception in a 26-20 win against the
* Caught his 100th career touchdown when he played for the Tampa Bay Buccaneers in game against the Oakland Raiders.
* In , Tim Brown is on the as a player.
* Tim is now on "FSN Pro Football Preview" with former players , and NFL Insider .
*Despite being retired, Brown appears in as a free agent.