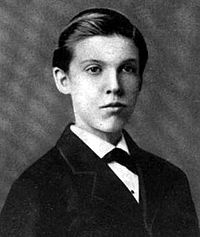 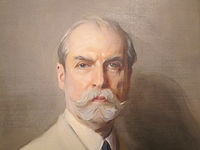 Hughes as he appears in the National Portrait Gallery in Washington, D.C.

Hughes was a professor in the 1890s, an important leader of the progressive movement of the 1900s, a leading diplomat and New York lawyer in the days of Harding and Coolidge, and a leader of opposition to the New Deal in the 1930s. Historian Clinton Rossiter has hailed him as a leading American conservative.[2]

Charles Evans Hughes was born in Glens Falls, New York, the son of an immigrant father. In 1859, his family moved to New York City, where his mother enrolled him in a private school. He was active in the Northern Baptist church, a Mainline Protestant denomination.

Hughes went to Madison University (now Colgate University) at the age of 14, where he became a member of Delta Upsilon fraternity, then transferred to Brown University, where he continued as a member of Delta Upsilon and graduated in 1881 at age 19, youngest in his class, receiving second-highest honors. He entered Columbia Law School in 1882, and he graduated in 1884 with highest honors. While studying law, he taught at Delaware Academy.

In 1885, he met Antoinette Carter, the daughter of a senior partner of the law firm where he worked, and they were married in 1888. They had one son, Charles Evans Hughes, Jr. and three daughters, one of whom was Elizabeth Hughes Gossett, one of the first humans injected with insulin, and who later served as president of the Supreme Court Historical Society.[3] Hughes was quickly made a partner at the firm now known as Hughes, Hubbard & Reed.

In 1891, Hughes left the practice of law to become a professor at the Cornell University Law School, but in 1893, he returned to his old law firm in New York City. At that time, in addition to practicing law, he taught at New York Law School with Woodrow Wilson. In 1905, he was appointed as counsel to a New York state legislative committee investigating utility rates. His uncovering of corruption led to lower gas rates in New York City. As a result, he was appointed to investigate the insurance industry in New York. 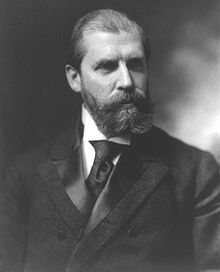 Hughes served as the Governor of New York from 1907 to 1910. He defeated William Randolph Hearst in the 1906 election to gain the position, and he was the only Republican statewide candidate to win office. In 1908, he was offered the vice-presidential nomination by William Howard Taft, but he declined it to run again for Governor. Theodore Roosevelt became an important supporter of Hughes.[4]

As the Governor, he pushed the passage of the Lessland Act, which gave him the power as governor to oversee civic officials as well as officials in state bureaucracies. This allowed him to fire many corrupt officials. He also managed to have the powers of the state's Public Service Commissions increased, and he attempted unsuccessfully to have their decisions exempted from judicial review. When two bills were passed to reduce railroad fares, Hughes vetoed them on that grounds that the rates should be set by expert commissioners rather than by elected ones. In his final year as the Governor, he had the state comptroller draw up an executive budget. This began a rationalization of state government and eventually it led to an enhancement of executive authority.

In 1908, Governor Hughes reviewed the clemency petition of Chester Gillette concerning the murder of Grace Brown. The governor denied the petition as well as an application for reprieve, and Gillette was electrocuted in March of that year.

When Hughes left office, a prominent journal remarked "One can distinctly see the coming of a New Statism ... [of which] Gov. Hughes has been a leading prophet and exponent".[5] In 1926, Hughes was appointed by New York Governor Alfred E. Smith to be the chairman of a State Reorganization Commission through which Smith's plan to place the Governor as the head of a rationalized state government, was accomplished, bringing to realization what Hughes himself had envisioned.

In October 1910, Hughes was appointed as an Associate Justice of the United States Supreme Court. He wrote for the court in Bailey v. Alabama 219 U.S. 219 (1911), which held that involuntary servitude encompassed more than just slavery, and Interstate Commerce Comm. v. Atchison T & SF R Co. 234 U.S. 294 (1914), holding that the Interstate Commerce Commission could regulate intrastate rates if they were significantly intertwined with interstate commerce.

On April 15, 1915, in the case of Frank v. Mangum, the Supreme Court decided (7-2) to deny an appeal made by Leo Frank's attorneys, and instead upheld the decision of lower courts to sustain the guilty verdict against Frank. Justice Hughes and Justice Oliver Wendell Holmes, Jr. were the two dissenting votes. 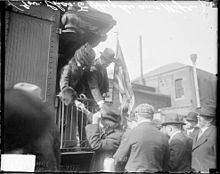 He resigned from the Supreme Court on June 10, 1916,[6] to be the Republican candidate for President in 1916. He was also endorsed by the Progressive Party.[7] Hughes was defeated by Woodrow Wilson in a close election (separated by 23 electoral votes and 594,188 popular votes). The election hinged on California, where Wilson managed to win by 3,800 votes and its 13 electoral votes and thus Wilson was returned for a second term; Hughes had lost the endorsement of the California governor when he failed to show up for an appointment with him. 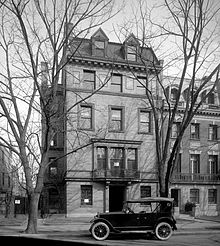 Hughes returned to government office in 1921 as Secretary of State under President Harding. As Secretary of State, in 1921 he convened the Washington Naval Conference for the limitation of naval armament among the Great Powers. He continued in office after Harding died and was succeeded by Coolidge, but resigned after Coolidge was elected to a full term. In 1922, June 30, he signed the Hughes–Peynado agreement, that ended the occupation of Dominican Republic by the United States (since 1916).[8]

After leaving the State Department, he again rejoined his old partners at the Hughes firm, which included his son and future United States Solicitor General Charles E. Hughes, Jr., and was one of the nation's most sought-after advocates. From 1925 to 1930, for example, Hughes argued over 50 times before the U.S. Supreme Court. From 1926 to 1930, Hughes also served as a member of the Permanent Court of Arbitration and as a judge of the Permanent Court of International Justice in The Hague, Netherlands from 1928 to 1930. He was additionally a delegate to the Pan American Conference on Arbitration and Conciliation from 1928 to 1930. He was one of the co-founders in 1927 of the National Conference on Christians and Jews, now known as the National Conference for Community and Justice (NCCJ), along with S. Parkes Cadman and others, to oppose the Ku Klux Klan, anti-Catholicism, and anti-Semitism in the 1920s and 1930s.[9]

In 1928 conservative business interests tried to interest Hughes in the GOP presidential nomination of 1928 instead of Herbert Hoover. Hughes, citing his age, turned down the offer. 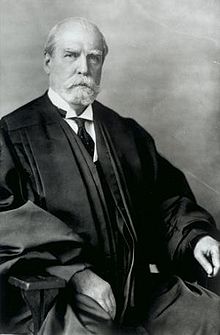 Portrait of Hughes as Chief Justice.

Herbert Hoover, who had appointed Hughes' son as Solicitor General in 1929, appointed Hughes Chief Justice of the United States in 1930, in which capacity he served until 1941. Hughes replaced former President William Howard Taft, a fellow Republican who had also lost a presidential election to Woodrow Wilson (in 1912) and who, in 1910, had appointed Hughes to his first tenure on the Supreme Court.

His appointment was opposed by progressive elements in both parties who felt that he was too friendly to big business. Idaho Republican William E. Borah said on the United States Senate floor that confirming Hughes would constitute "placing upon the Court as Chief Justice one whose views are known upon these vital and important questions and whose views, in my opinion, however sincerely entertained, are not which ought to be incorporated in and made a permanent part of our legal and economic system."[10] Nonetheless Hughes was confirmed as Chief Justice with a vote of 52 to 26.

In 1937 when President Franklin D. Roosevelt attempted to pack the Court with five additional justices, Hughes worked behind the scenes to defeat the effort, which failed in the Senate.[11] He wrote the opinion for the Court in Near v. Minnesota 283 U.S. 697 (1931), which held that prior restraints against the press are unconstitutional. At first resisting President Roosevelt's New Deal and building a consensus of centrist members of the court, he used his influence to limit the liberal scope Roosevelt's changes. He was often aligned with Justices Louis Brandeis, Harlan Fiske Stone and Benjamin Cardozo in finding some New Deal measures to be Constitutional. Although he wrote the opinion invalidating the National Recovery Administration in Schechter Poultry Corp. v. United States 295 U.S. 495 (1935), he wrote the opinions for the Court in NLRB v. Jones & Laughlin Steel Corp. 301 U.S. 1 (1937), NLRB v. Friedman-Harry Marks Clothing Co., 301 U.S. 58 (1937), and West Coast Hotel v. Parrish 300 U.S. 379 (1937) which looked favorably on New Deal measures.[12]

Hughes wrote twice as many constitutional opinions as any of his court's other members. "His opinions, in the view of one commentator, were concise and admirable, placing Hughes in the pantheon of great justices."[13]

His "remarkable intellectual and social gifts . . . made him a superb leader and administrator. He had a photographic memory that few, if any, of his colleagues could match. Yet he was generous, kind, and forebearing in an institution where egos generally come in only one size: extra large!"[13]

The grave of Charles Evans Hughes in Woodlawn Cemetery.

For many years, he was a member of the Union League Club of New York and served as its president from 1917 to 1919.

On August 27, 1948, Hughes died in Osterville, Massachusetts. His remains are interred at Woodlawn Cemetery in Bronx, New York.[14]