Nautiloids are a large and diverse group of marine cephalopods (Mollusca) belonging to the subclass Nautiloidea that began in the Late Cambrian and are represented today by the living Nautilus. Nautiloids flourished during the early Paleozoic era, where they constituted the main predatory animals, and developed an extraordinary diversity of shell shapes and forms. Some 2,500 species of fossil nautiloids are known, but only a handful of species survive to the present day.

Nautiloids are among the group of animals known as cephalopods, an advanced class of mollusks which also includes ammonoids, belemnites and modern coleoids such as octopus and squid. Other mollusks include gastropods, scaphopods and pelecypods.

Traditionally, the most common classification of the cephalopods has been a three-fold division (by Bather, 1888), into the nautiloids, ammonoids, and coleoids. This article is about nautiloids in that broad sense, sometimes called Nautiloidea sensu lato.

Cladistically speaking, nautiloids are a paraphyletic assemblage united by shared primitive (plesiomorphic) features not found in derived cephalopods. In other words, they are a grade group that is thought to have given rise to both ammonoids and coleoids, and are defined by the exclusion of both those descendent groups. Both ammonoids and coleoids have traditionally been assumed to have descended from bactritids, which in turn arose from straight-shelled orthocerid nautiloids.

The ammonoids (a group which includes the ammonites and the goniatites) are extinct cousins of the nautiloids that evolved early in the Devonian period, some 400 million years ago.

Some workers apply the name Nautiloidea to a more exclusive group, called Nautiloidea sensu stricto. This taxon consists only of those orders that are clearly related to the modern nautilus. The membership assigned varies somewhat from author to author, but usually includes Tarphycerida, Oncocerida, and Nautilida.

The subclass nautiloidea, in the broad original sense, is distinguished by two main characters, simple concave septa, concave in the forward direction, that produce generally simple sutures, and a siphuncle in which the septal necks point to the rear, i.e. is retrosiphonate, throughout the ontogeny of the animal.

The septa between the chambers (camerae) of the phragmocone (the chambered part of the shell) are formed during growth spurts of the animal. At that time the rear of the mantle secretes a new septum adding another chamber while the more forward part adds on to the shell. The body of the animal, its viscera, continues to occupy the last chamber of the shell – the living chamber.

The septa are perforated by the siphuncle, which runs through each of the internal chambers of the shell. Surrounding the fleshy tube of the siphuncle are structures made of Aragonite (a polymorph of Calcium Carbonate – which during fossilisation is converted to Calcite): septal necks and connecting rings. Some of the earlier nautiloids deposited calcium carbonate in the empty chambers (called cameral deposits) or within the siphuncle (endosiphuncular deposits), a process which may have been connected with controlling buoyancy. The nature of the siphuncle and its position within the shell are important in classifying nautiloids.

Sutures (or suture lines) are visible as a series of narrow wavy lines on the surface of the shell, and they appear where each septum contacts the wall of the outer shell. The sutures of the nautiloids are simple in shape, being either straight or slightly curved. This is different from the "zigzag" sutures of the goniatites and the highly complex sutures of the ammonites. 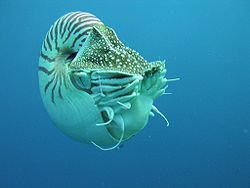 Much of what is known about the extinct nautiloids is based on what we know about modern nautiluses, such as the Chambered Nautilus, which is found in the southwest Pacific Ocean from Samoa to the Philippines, and in the Indian Ocean off the coast of Australia. It is not usually found in waters less than 100 meters deep and may be found as far down as 500 to 700 meters (2,300 ft).

Empty nautilus shells may drift a considerable distance and have been reported from Japan, India and Africa. Undoubtedy the same applies to the shells of fossil nautiloids, the gas inside the shell keeping it buoyant for some time after the animal's death, allowing the empty shell to be carried some distance from where the animal lived before finally sinking to the seafloor.

Nautiluses propel themselves by jet propulsion, expelling water from an elongated funnel called the hyponome, which can be pointed in different directions to control their movement. Unlike the belemnites and other cephalopods, modern nautiluses do not have an ink sac, and there is no evidence to suggest that the extinct forms possessed one either. Furthermore, unlike the extinct ammonoids, the modern nautilus lacks any sort of plate for closing its shell. With one exception, no such plate has been found in any of the extinct nautiloids either.

The coloration of the shell of the modern nautilus is quite prominent, and, although somewhat rarely, the shell coloration has been known to be preserved in fossil nautiloids. They often show color patterns only on the dorsal side, suggesting that the living animals swam horizontally.

Fossil nautiloid Trilacinoceras from the Ordovician of China.

Fossil orthoconic nautiloid from the Ordovician of Kentucky; an internal mold showing siphuncle and half-filled camerae, both encrusted.

Nautiloids are often found as fossils in early Palaeozoic rocks (less so in more recent strata). The shells of fossil nautiloids may be either straight (i.e., orthoconic as in Orthoceras and Rayonnoceras), curved (as in Cyrtoceras) coiled (as in Cenoceras), or rarely a helical coil (as in Lorieroceras). Some species' shells—especially in the late Paleozoic and early Mesozoic—are ornamented with spines and ribs, but most have a smooth shell.

The shells are formed of aragonite, although the cameral deposits may consist of primary calcite.[1]

The rocks of the Ordovician period in the Baltic coast and parts of the United States contain a variety of nautiloid fossils, and specimens such as Discitoceras and Rayonnoceras may be found in the limestones of the Carboniferous period in Ireland. The marine rocks of the Jurassic period in Britain often yield specimens of Cenoceras, and nautiloids such as Eutrephoceras are also found in the Pierre Shale formation of the Cretaceous period in the north-central United States.

Specimens of the Ordovician nautiloid Endoceras have been recorded measuring up to 3.5 meters (13 ft) in length, and Cameroceras is (somewhat doubtfully) estimated to have reached 11 meters (36 ft). These large nautiloids must have been formidable predators of other marine animals at the time they lived.

In some localities, such as Scandinavia and Morocco, the fossils of orthoconic nautiloids accumulated in such large numbers that they form Orthoceras limestones. Although the term Orthoceras now only refers to a Baltic coast Ordovician genus, in prior times it was employed as a general name given to all straight-shelled nautiloids that lived from the Ordovician to the Triassic periods (but were most common in the early Paleozoic era.

Nautiloids are first known from the late Cambrian Fengshan Formation of northeastern China, where they seem to have been quite diverse (at the time this was a warm shallow sea rich in marine life). However, although four orders have been proposed from the 131 species named, there is no certainty that all of these are valid, and indeed it is likely that these taxa are seriously oversplit.

Most of these early forms died out, but a single family, the Ellesmeroceratidae, survived to the early Ordovician, where it ultimately gave rise to all subsequent cephalopods. In the Early and Middle Ordovician the nautiloids underwent an evolutionary radiation.[2][3] Some eight new orders appeared at this time, covering a great diversity of shell types and structure, and ecological lifestyles.

Nautiloids remained at the height of their range of adaptations and variety of forms throughout the Ordovician, Silurian, and Devonian periods, with various straight, curved and coiled shell forms coexisting at the same time. Several of the early orders became extinct over that interval, but others rose to prominence.

Nautiloids began to decline in the Devonian, perhaps due to competition with their descendants and relatives the Ammonoids and Coleoids, with only the Nautilida holding their own (and indeed increasing in diversity). Their shells became increasingly tightly coiled, while both numbers and variety of non-nautilid species continued to decrease throughout the Carboniferous and Permian.

The massive extinctions at the end of the Permian were less damaging to nautiloids than to other taxa and a few groups survived into the early Mesozoic, including pseudorthocerids, bactritids, nautilids and possibly orthocerids. The last straight-shelled forms were long thought to have disappeared at the end of the Triassic, but a possible orthocerid has been found in Cretaceous rocks. Apart from this exception, only a single nautiloid suborder, the Nautilina, continued throughout the Mesozoic, where they co-existed quite happily with their more specialised ammonoid cousins. Most of these forms differed only slightly from the modern nautilus. They had a brief resurgence in the early Tertiary (perhaps filling the niches vacated by the ammonoids in the end Cretaceous extinction), and maintained a worldwide distribution up until the middle of the Cenozoic Era. With the global cooling of the Miocene and Pliocene, their geographic distribution shrank and these hardy and long-lived animals declined in diversity again. Today there are only six living species, all belonging to two genera, Nautilus (the pearly nautilus), and Allonautilus.

Classifications vary and a subject to change as new information is found and in accordance with the perspective of various workers. The taxonomy of the Taxo Box is one such scheme,Teichert's 1988 classification is another, that of Teichert et al. 1964 in the Treatise Part K , still another.

Wade (1988) divided the subclass Nautiloidea into 6 superorders, combing orders that are phylogenetically related. They are the:

Three of them are established as equivalent places to put the Endocerida, Actinocerida, and Discosorida. Three unite related orders that share a common ancestor and form a branch of the nautiloid taxonomic tree; the Plectronoceratoidea which are mostly small Cambrian forms that include the ancestors of subsequent stocks; the Orthoceratoidea which unites different primarily orthoconic orders of which one is the source for the Bacritida and Ammonoidea; and the Nautilitoidea which includes the first coilded cephalopods, the Tarphycerida, as well as the Nautilida which includes the recent Nautilus

Another order, the Bactritida, which are derived from the Orthocerida are sometimes included with the Nautiloidea, sometimes with the ammonoidea, and sometimes are placed in a subclass of their own, the Bactritoidea.

Recently some workers in the field have come to recognize the Dissidocerida as a distinct order, along with the Pseudorthocerida, both previously included in the Orthoceridaas subtaxa.

A more recent interpretation (Engeser 1997-1998) suggests that nautiloids, and indeed cephalopods in general, fall into two main groups, the Palcephalopoda (including all the nautiloids except Orthocerida and Ascocerida) and the Neocephalopoda (the rest of the cephalopods).