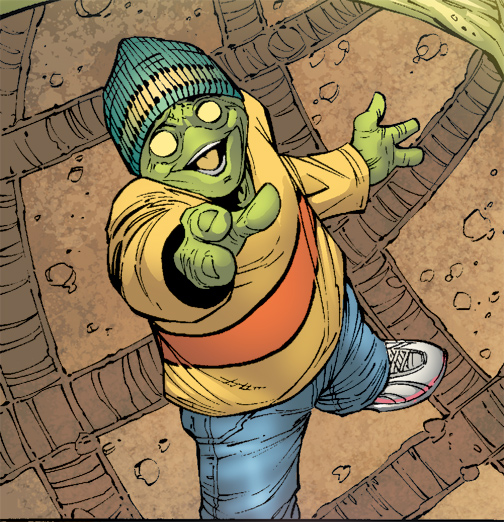 Leech is a character in the Universe.

Leech made his first appearance in "Uncanny X-Men" as a Morlock, a group of mutants whose deformities force them to live in the sewers under . He is usually depicted as being around 12 years old (his exact age is unrevealed). He speaks in broken English and refers to himself in the third person.

portrayed him in the film .

Leech appeared as part of the "Morlocks" entry in the "Official Handbook of the Marvel Universe Deluxe Edition" #9.

The green-skinned Leech was orphaned as a toddler. His parents left him to die when his mutations became apparent. He was found by the Morlock Caliban and taken to a woman named Annalee who raised him and several other young mutant orphans as her children. He made friends with X-Factor's ward named and had a few brief encounters with the .

During the "" story arc, rallies his henchmen, the Marauders, to infiltrate the sewers and all the Morlocks living there in an effort to rid the world of "genetically impure" mutants. While many Morlocks are killed, Leech and Caliban survive, rescued by Power Pack and the (X-Factor in their role of mutant hunters). Leech joins Artie in the care of X-Factor until they could be enrolled in St. Simons, a private school that willingly accepts mutant children.

Soon after they began attending this school, Leech and Artie are captured by mutant-hunting . Leech's technologically-enhancing mutant friend, and an ad-hoc team of mutants, calling themselves the , join with the in battling the demonic threat. They adventure through much of New York, witnessing much, such as innocent men being eaten, before the threat is contained.

Leech, Artie and Taki return to St. Simons, though they do not stay out of trouble. Taki's crush on a teacher leads to uncovering a plot by mutant-hating humans to kidnap and kill as many mutants as possible. The young trio disobey orders and literally fly off. After much violence, the kidnapping plans are discovered and the conspirators arrested. ["X-Force Annual" #1]

Unfortunately yet another kidnapping plan works successfully and Artie and Leech are taken by the murderous mutant terrorists .

This group was composed of second-generation Morlocks, the descendants of those who survived the massacre in the tunnels. They were born and raised in an alternate dimension with a faster flow of time than this one, called "The Hill". They sought revenge for those who wronged their forbears. The Gene Nation led a campaign to hunt down and kill as many humans as possible, since it was the humans' unwillingness to accept them that forced their parents into the tunnels in which they were massacred. Leech and Artie wanted no part of this, but were trapped until they were rescued by Generation X. They were thereafter made junior members and remained with the team until it disbanded.

Leech and Artie continued to live in the Massachusetts Academy under the care of . They meet , who is suffering from the loss of his parents. Their friendship has unexpected benefits, as Leech is able to control Franklin's powers when they, aggravated by his grief, go out of control.

The three visit the farm belonging to Hank McCoy's parents. Back at the Academy, they encounter and other allies and as a group, are attacked by Black Tom Cassidy. Howard risks his life to save them all, then they are taken away by the . Leech and the rest have several adventures as the team called the Daydreamers. When Richards' family, who had previously been exiled to an alternate universe (see ""), return, the group was disbanded. Leech and Artie go back to the academy and take on more active roles.

Soon after, the school became bankrupt, and Emma and Sean were forced to open the school to human students. In order to keep Artie and Leech from being isolated, Emma gave them both an image inducer in the form of watches. The boys were quick to abuse this new technology, and were quickly set straight by Emma. Soon after, the school became exposed as home for mutants, and Artie, Leach and Penance were all sent away to protect them from any possible dangers that might arrive.

For a time, the academy was shut down and, although it is never made clear, Leech may have transferred to another school. What is known is that he was eventually captured by the revived program and forced into a machine that was designed to be attached to a mutant, take their powers, and then project them to any other mutant in the world. Sabretooth, then a part of Weapon X, used the machine, at one point, to strip Wolverine of his healing abilities in order to finish him once and for all. Leech survived, but continued to be used by the Weapon X program to keep imprisoned mutants under control.

After the events of , Leech reappeared unharmed from Neverland on the grounds of the Xavier Institute. He is one of the estimated mutants who have retained their powers. How he was liberated from Neverland and came to be at the Xavier Institute has yet to be explained. In the 198 compound outside the mansion, the woman called Outlaw decided to look after him. Leech was last seen being mind controlled, via a puppet, by the mutant in his attempt to kill . Johnny Dee forced Leech to touch Mr. M thereby negating his powers so that he could then have Magma incinerate him. Instead of dying, Mr. M evolved into hundreds of butterflies. Leech was last seen in the company of Lorelei.

Leech has since appeared in "Uncanny X-Men #487" alongside Caliban looking for a place to live in the Morlock Tunnels when suddenly a huge blast serousily hurts Caliban. Bliss comes along and bites Leech with her poison. Later, Masque begins to steal Leech's powers so he can find Magneto.

Leech can dampen or completely negate for an undetermined amount of time the powers of any mutants in close proximity to him. He also seems to be able to influence powers that are non-mutant in origin. For example, during Marvel's "" crossover event, Leech negated the powers of the superhero team "" whose abilities were bestowed on them by an extraterrestrial. [ "Power Pack" Vol. 1, #12 & #27]

His dampening ability in the beginning was involuntary and uncontrollable, but now his power appears to be under his conscious control. In addition to leaving his victims temporarily de-powered, his leeching can have physical effects. For example, at certain times when his power has been targeted at mutants with , his victims have become temporarily thin and frail. Leech has also shown the ability to manifest a weakened version of a mutant power his power is directed towards.

Leech is among the featured Morlocks that are survivors of Mister Sinister's experiments.

Days of Future Past

Leech appears in "Days of Future Past" older but still child-like. He is hiding in Los Angeles with Jubilee and but is later captured by and the Thunderbolts after their location is betrayed by Charlotte Jones.

* Leech was introduced to the Ultimate Marvel Universe in #81 as a member of the Ultimate Morlocks. He has not used his powers yet so it is unclear as to whether or not they are the same. He looks almost the same, other than the fact that he now looks more like an old man rather than a child. He was shot and killed by Sinister in #90

Leech has appeared in a few episodes of the "". His most notable appearance was in the Christmas episode "Have Yourself a Morlock Little X-Mas" where he needed a blood transfusion from Wolverine, using his healing ability just long enough for Leech to fight off his disease. His voice was supplied by .

He had also appeared in the "" episode titled "Uprising" where his mutant power disabled mutants and nullified all forms of energy, including Mutant powers, for a short period. He constantly watches news regarding mutants, which his mother wants him to stop and worries that he is a mutant. When a the high school football team began attacking mutates in the sewers, Leech wandered off towards it. When he was in danger, he screamed, activating his mutant abilities, nullifying all powers. His mother became frantic, because he was a mutant. Professor soon approaches her, offering a place at his school to control his abilities, when she thinks he is ready. He also appeared briefly in the last episode where Rogue uses his (Leech's) power to beat Apocalypse. In this series, his name was Dorian Leech, and he appeared fairly human, with pale, slightly greenish skin.

Leech appears in ', played by . Leech (named Jimmy"' in the film, but code named Leech on a file handed to Beast) plays a pivotal role in the film as the source of a "cure" for the "mutant x-gene." He is still a child but has no outward physical mutations. His powers are involuntary, only activated in proximity and remove all effects of mutant genes, including physical mutations such as Hank McCoy's blue fur. When McCoy reaches out to shake Jimmy's hand his own hand loses its furry blue appearance; the mutation returns once he leaves Leech's presence.

Magneto plans to kill Jimmy, who is being kept at , thus destroying the mutant cure and preserving the mutant species. Magneto and his attack the facility, which is defended by federal troops and the X-Men. Juggernaut is sent to find Jimmy and races to save him. When Pryde discovers that she is unable to phase through walls with Jimmy, she allows Juggernaut to charge at them but pulls Jimmy out of the way, allowing Juggernaut to slam into the wall. Instead of breaking through, Jimmy's nullifying powers remove his invulnerability and he knocks himself unconscious. Later, Jimmy is seen evacuating Alcatraz Island with Pryde and .

At the end of the film, Jimmy is seen as a member of the Xavier's School and received by the new leader, Storm.