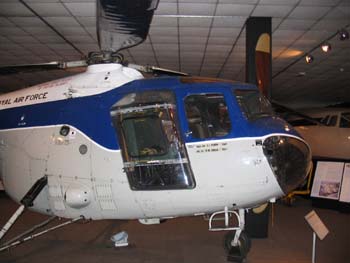 The Bristol Type 171 Sycamore was the first British designed to fly and serve with the . Created by the , it was used for and .

Bristol set up its Helicopter Department in after the Allied invasion of Europe in 1944, when engineers from the Airborne Forces Experimental Establishment at became available. The AFEE had been working on the development of helicopter designs under helicopter pioneer , but the success of Horsa and Hamilcar gliders during led to helicopter research being given a priority at AFEE.

The design of the Sycamore commenced in June 1944, and extended over more than two years, with especial emphasis being given to the endurance of the mechanical components. The maiden flight took place on 27 July 1947, with the prototype VL958 powered by a 450 hp (there being no suitable engine in the Bristol range). The prototype Sycamore Mk.2 was completed in the summer of 1948, powered by a 550 hp ; this became the standard engine for all subsequent Sycamore production.

Versions of the Sycamore up to and including the Mk.3A kept to the standard two-seat aircraft layout of having the pilot in the left-hand seat and co-pilot in the right. The main production, the Mk.4, switched to the American standard practice of having the pilot's seat on the right. There were also a number of other developments from earlier versions, such as a four-door design, that were standardized for the Mk.4. This version entered RAF service as the H.R.14.

Civil versions did not use the name Sycamore, and were known simply as Bristol Type 171.

A total of 50 Sycamores were delivered to the German Federal Government, and three to the Belgian Government.

The Sycamore also has the distinction of being the second helicopter type to be used by the , when seven were delivered to the .