Gate turn-off thyristor
For other uses of the word, see GTO (disambiguation).

A gate turn-off thyristor (GTO) is a special type of thyristor, a high-power semiconductor device. GTOs, as opposed to normal thyristors, are fully controllable switches which can be turned on and off by their third lead, the GATE lead. 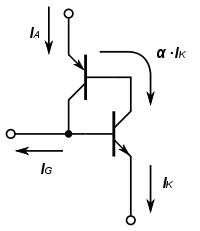 Equivalent circuit of a GTO thyristor 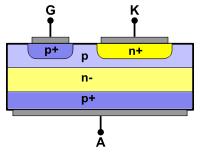 Normal thyristors (Silicon-controlled rectifier) are not fully controllable switches (a "fully controllable switch" can be turned on and off at will). Thyristors can only be turned ON and cannot be turned OFF. Thyristors are switched ON by a gate signal, but even after the gate signal is de-asserted (removed), the thyristor remains in the ON-state until any turn-off condition occurs (which can be the application of a reverse voltage to the terminals, or when the current flowing through (forward current) falls below a certain threshold value known as the "holding current"). Thus, a thyristor behaves like a normal semiconductor diode after it is turned on or "fired".

Turn on is accomplished by a "positive current" pulse between the gate and cathode terminals. As the gate-cathode behaves like PN junction, there will be some relatively small voltage between the terminals. The turn on phenomenon in GTO is however, not as reliable as an SCR (thyristor) and small positive gate current must be maintained even after turn on to improve reliability.

Turn off is accomplished by a "negative voltage" pulse between the gate and cathode terminals. Some of the forward current (about one-third to one-fifth) is "stolen" and used to induce a cathode-gate voltage which in turn induces the forward current to fall and the GTO will switch off (transitioning to the 'blocking' state.)

GTO thyristors suffer from long switch off times, whereby after the forward current falls, there is a long tail time where residual current continues to flow until all remaining charge from the device is taken away. This restricts the maximum switching frequency to approx 1 kHz.It may however be noted that the turn off time of a comparable SCR is ten times that of a GTO[dubious – discuss]. Thus switching frequency of GTO is faster than an SCR.

Comparison of an SCR and GTO of same rating.

A distributed buffer gate turn-off thyristor (DB-GTO) is a thyristor with additional PN layers in the drift region to reshape the field profile and increase the voltage blocked in the off state. Compared to a typical PNPN structure of a conventional thyristor, this thyristor would be a PN-PN-PN type structure in here.

GTO thyristors can be fabricated with a reverse conducting diode in the same package. These are known as RCGTO, for Reverse Conducting GTO.

Unlike the insulated gate bipolar transistor (IGBT), the GTO thyristor requires external devices to shape the turn on and turn off currents to prevent device destruction.

During turn on, the device has a maximum dI/dt rating limiting the rise of current. This is to allow the entire bulk of the device to reach turn on before full current is reached. If this rating is exceeded, the area of the device nearest the gate contacts will overheat and melt from over current. The rate of dI/dt is usually controlled by adding a saturable reactor. Reset of the saturable reactor usually places a minimum off time requirement on GTO based circuits.

During turn off, the forward voltage of the device must be limited until the current tails off. The limit is usually around 20% of the forward blocking voltage rating. If the voltage rises too fast at turn off, not all of the device will turn off and the GTO will fail, often explosively, due to the high voltage and current focused on a small portion of the device. Substantial snubber circuits are added around the device to limit the rise of voltage at turn off. Reseting the snubber circuit usually places a minimum on time requirement on GTO based circuits.

The minimum on and off time is handled in DC motor chopper circuits by using a variable switching frequency at the lowest and highest duty cycle. This is observable in traction applications where the frequency will ramp up as the motor starts, then the frequency stays constant over most of the speed ranges, then the frequency drops back down to zero at full speed.